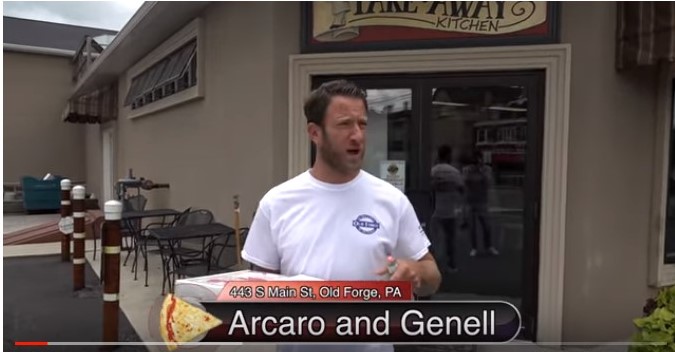 El Presidente came to Old Forge for a cut.

Dave Portnoy, founder of the satirical sports and pop-culture blog Barstool Sports and known as “El Presidente” by fans, visited the borough on Wednesday, Aug. 14, as part of Barstool Pizza Reviews.

Over the past two weeks, Portnoy has released his video reviews of Old Forge pizza.

He travels the country in search of the best pies and slices — or, in Northeast Pennsylvania’s case, the best trays and cuts. He rates each piece on a scale of 1 to 10. The median score is 7.1, according to a study of Portnoy’s reviews published in May on Towardsdatascience.com.

Published across social media on Aug. 15, the first video showed the famously sharp-tongued Portnoy explaining that he decided to make the trip to NEPA after Old Forge pizza fans inundated him with emails.

“Why did we wake up and drive 2½ hours to Old Forge?” Portnoy said in the almost five-minute video. “Because they say they’re ‘The Pizza Capital of the United States.’”

Lackawanna County outreach coordinator and Old Forge council member Rick Notari received several different messages that Portnoy was spotted at Revello’s, including a photo of the entrepreneur in front of Lackawanna County Convention and Visitors Bureau’s giant orange map pin on Main Street in Old Forge. Notari posted the news to Facebook and alerted several borough residents via text. As the day went on, social media was flooded with photos and videos of Portnoy as he tried cuts of pizza and snapped photos with fans as well as restaurant owners and staff.

A video released on Thursday, Aug. 15, showed Portnoy tasting and reviewing a cut from Revello’s, which he rated a 7.4. On Friday, Aug. 16, night, he released a video reviewing a cut from Arcaro & Genell, which he ranked a 7.5. On Tuesday, Aug. 20, and Wednesday, Aug. 21, Portnoy released reviews of Cusumano and Cafe Rinaldi, respectively, which both earned a 7.6. A video review of Salerno’s Cafe uploaded on Thursday, Aug. 22, showed Portnoy giving the pizza a 7.1. On Tuesday, Aug. 27, the final review video of Mary Lou’s Pizza, which earned a 7.3, was posted.

Notari also noted that Portnoy raved about his time in Old Forge on Barstool’s afternoon show on SiriusXM and was impressed by the number of people who came out to meet him.
Revello’s owner, Pat Revello, had no idea Portnoy was stopping by and was at lunch with wife, Heather, and their children for his wife’s birthday when “El Prez” sampled his restaurant’s pizza. Revello — who is a big Barstool fan and has been following Portnoy since before his pizza review segments started — learned from a Facebook post that Portnoy was at the restaurant.

“It was just a big thrill for him to be there,” Revello said, adding that restaurant baker Brendan Edwards, another Barstool fan, got the chance to meet Portnoy. “If anyone really knows (Portnoy,) it’s a dream come true for any pizza place.”

In the initial video, Portnoy explained he researched the borough’s history and knew that the style of square pizza was created for hungry coal miners.

“I actually like it,” Portnoy said before he took another bite of his plain red cut. “I do like this pizza.”

“Combining Barstool Sports with Old Forge pizza, it created a ton of buzz,” he said. “Whether you love Dave or you hate him, whether you like Old Forge pizza or not, this was a positive thing that really shined a light on small businesses in this area.”

Mirabelli said some were expecting a lower score only because Old Forge style is very different from the thin-crust, New York-style pizza Portnoy favors. Mirabelli said the borough’s scores were above average, however, given Portnoy’s recent reviews. No matter the score, Revello was just happy about the experience.

“It’s good for the whole town. It’s good for everyone that’s involved,” Revello said, adding he’s seen a surge in online sales. “There’s a lot of good pizza places in the area and in Old Forge. I’m just glad he chose my place as one of them.”