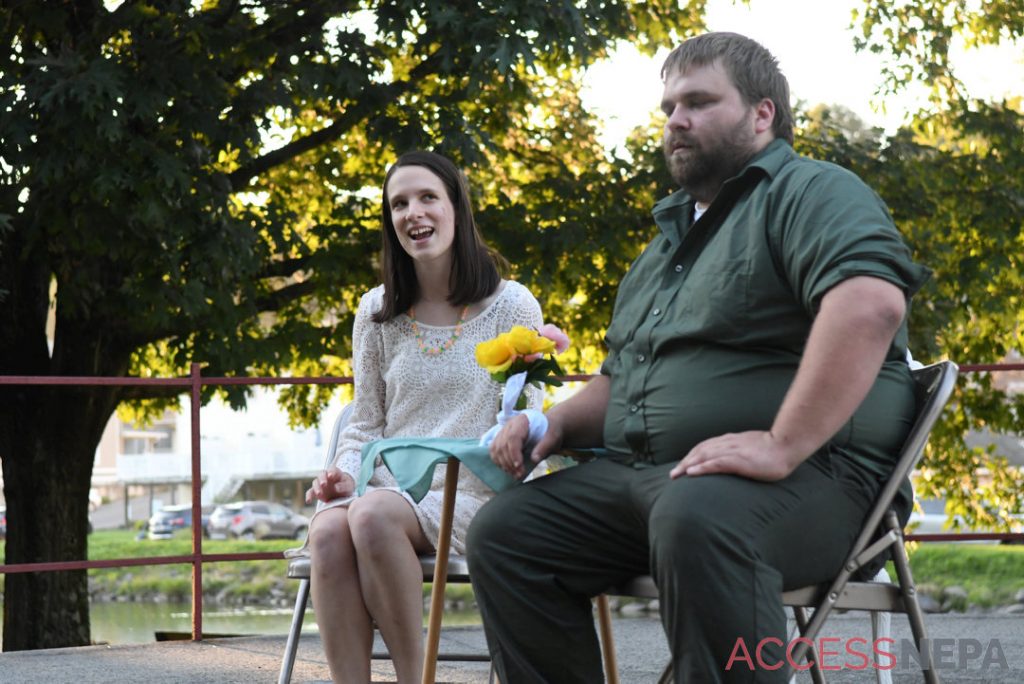 SCHUYLKILL HAVEN — The Actors Guild of Schuylkill County is putting a modern twist on the classic “Cyrano de Bergerac” when it stages the play at 2 and 6 p.m. Saturday in Bubeck Park, Schuylkill Haven.

The title character, played by Nate Heater of New Ringgold, is a man who is brilliant but ashamed of his unusual physical appearance. He uses his handsome friend Christian (Stanley Gorski) to bridge the gap between himself and the beautiful Roxane (Margaret Schachte of Ashland). Traditionally, Cyrano is self-conscious over his prodigious nose.

“I am always self-conscious of my weight so I can relate to not liking a certain part of myself,” Heater said. “That definitely helped me out with finding this character. I think this is a great show to put on, especially with the rise of social media. Too many times if we don’t have a certain body shape or look like a celebrity, we think we are ugly when that isn’t the case.”

This modernized version of “Cyrano” switches the setting from 17th century France to the Vietnam War era in the 20th century. Cyrano and Christian are American soldiers, while Roxane is a flower child.

“I have always loved the premise of why Cyrano thinks he is so ugly and the dynamics of arguably one of the most famous literary love triangles,” said director Jessica Miller. “Vietnam was a crazy time in history (with) so many sides pulling at each other. I felt it helps to intensify the urgency of the story.”

When Miller realized that the performance would be on the 20th anniversary of the Sept. 11 attacks, she knew the play had to be set in Vietnam. That was not only done out of respect for the U.S. military, but because the Vietnam setting would emphasize how divided the play’s characters were.

“I love it,” Heater said. “I am a fan of modernizing older pieces of work to have the audience relate more to it. (Cyrano) hates the way he looks but is an excellent soldier. Many soldiers came back with altered personalities. Vietnam was a time of great division and a heightened urgency about life. It gives a new twist.”

“The audience will feel a greater connection with the story because the costumes and props look familiar to them,” she said. “I think seeing the soldiers wearing modern uniforms really drills home the fact that this is a story about love and war.”

The parts of Cyrano and Roxane are unlike any that Heater and Schachte have played before. This is Schachte’s first speaking role in a play. Heater is used to playing comic relief, not an eloquent and respected character like Cyrano.

“He still got to be larger than life, but not over the top,” Heater said of Cyrano. “(The Vietnam setting) definitely changes how he holds himself, how he presents himself, how he speaks, everything along those lines.”