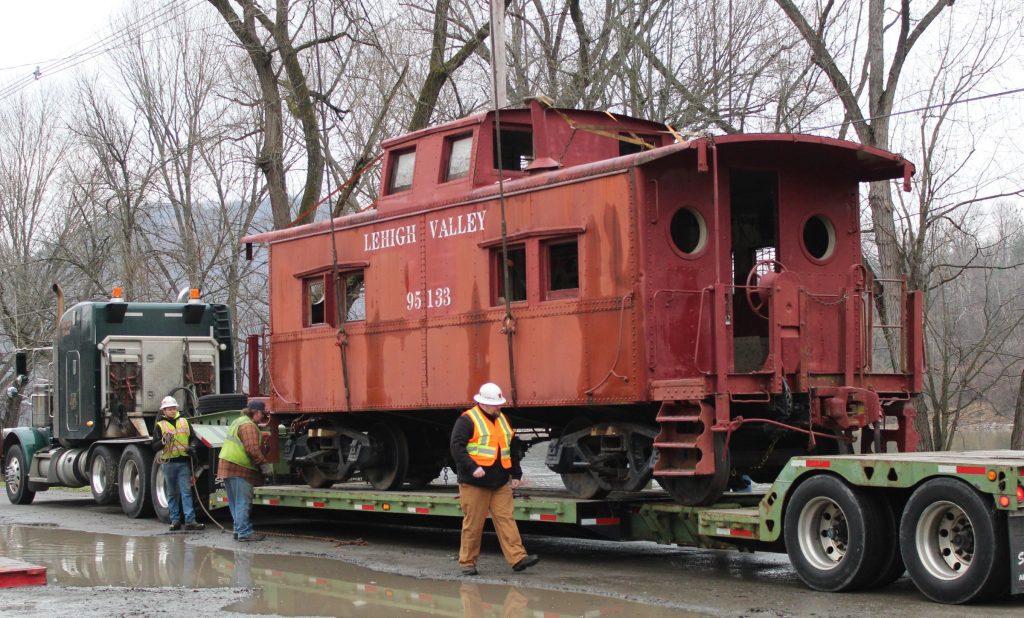 The Lehigh Valley caboose in Tunkhannock’s Riverside Park is officially on its way to its new home in Wayne County.

In October, Tunkhannock Borough Council and the Wyoming County Historical Society transferred ownership of the caboose to Myles Group, owner of the Delaware, Lackawaxen & Stourbridge Railroad Co., which operates the Stourbridge Line in Honesdale.

A crew spent Monday morning loading the caboose onto a truck, then transporting it to its new home.

“The obvious question is why don’t they just move it by rail?,” asked Tom Nemeth, owner and editor of Railpace Newsmagazine, shich is associated with DL&S. “The answer is that the wheels aren’t really in good shape to roll.”

Tunkhannock Borough Councilman Dan Gay said there were insufficient resources available to take care of the caboose, which also experienced vandalism while sitting in the park. Ultimately, council decided that giving it up was in the best interest of preserving its history.

Gay’s grandfather, the late George “Papa” Gay, purchased the caboose years ago and eventually donated it for public use.

His grandson said it’s fantastic that the railroad company has taken ownership of the caboose.

“I’m excited to see what they actually do with the caboose in the long run,” Gay said.

The caboose is in fairly good shape but needs some mechanical work, said Nemeth, adding it will serve as a nice addition to the Stourbridge Line.

Passengers can board the Stourbridge Line from Honesdale or Hawley and take a scenic ride along the Lackawaxen River. Stourbridge has six cabooses already, but the Lehigh Valley caboose will be the first of its kind to enter the collection.

“By bringing this to Honesdale, they’ll have a caboose that represents Northeastern Pennsylvania,” Nemeth said.

The caboose was built in 1944, and weighs 22 tons, which Richard Jahn, first vice president of the Anthracite Railroads Historical Society, said is actually pretty light as far as railroad equipment goes.

“This caboose probably ran through this town many, many times on the tracks right next door, here,” Jahn said at Riverside Park.