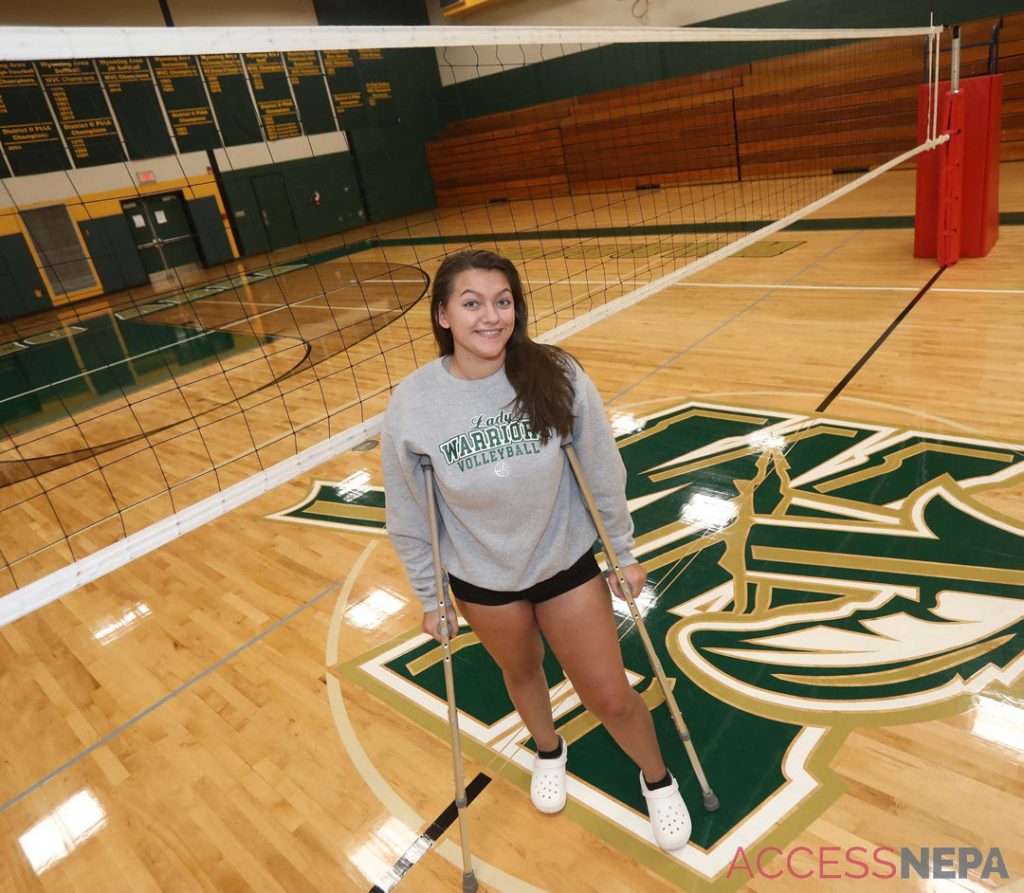 Wyoming Area’s oft-injured Lombardo as tough as it gets

Most grateful athlete, yet least likely to play.

It’s an unfortunate 1-2 punch of superlatives that won’t appear anytime soon in a Wyoming Area yearbook, but that fit Leana Lombardo’s high school experience all too well.

Lombardo, a senior, underwent three surgeries between July 2018 and May 2020, a series of corrective and reconstructive operations to fix a painful — nearly debilitating — birth defect in her hips that doctors warned would only get worse.

“The first surgery took five hours,” said Leana’s mother, Susan Lombardo. “I sat there and just watched the clock, worrying about what was happening and not knowing how she was going to walk again.”

Leana, a former youth basketball standout whose success included winning a state championship in seventh grade for Wyoming Area Catholic, was faring no better than her mother. Leana was just 15 years old, scared of the pain, the recovery and the uncertainty that clouded what was supposed to be the prime of her athletic career.

“Sports have always helped me through life,” Leana said. “I’ve loved having something to do, something to keep my mind off of anything that’s bothering me.”

Relief finally arrived a few months ago. Leana was cleared to play for the Warriors’ girls volleyball team and the PIAA, after months of consternation brought on by the threat of COVID-19, allowed teams to resume athletic activities.

“I’m just grateful … to show my real talent, to show that I am normal, to finally be able to compete with, be friends with and meet all these other kids,” Leana said. “It is the best feeling in the world.”

Leana was a game-changer for the Warriors, according to head coach John Bonin, who recalls Leana having “the loudest and best block I’ve seen in two years” in a match against Berwick.

Yet another setback was looming, however. Just past the midway point of the season, Leana went down with a knee injury later identified as a torn ACL. It was a devastating diagnosis, but Leana has taken it in stride because there is another superlative of which she’s worthy: Toughest individual.

“I’ll be honest,” Leana said, “I don’t think anything is worse than what I’ve already been through.”

Leana was born with femoral anteversion in her left and right hips. It’s an often-misdiagnosed birth defect, one that doctors didn’t detect until Leana was 11 or 12, when she noticed her feet pointing inward.

“It wasn’t a big deal, it wasn’t affecting my basketball career at the time,” Leana said. “During my seventh-grade year, we started to notice that it was starting to hurt more.”

Leana played through the pain, transferring to Wyoming Area and discovering a knack for jumping events on the school’s junior high track and field team.

Many cases of femoral anteversion correct themselves with time, but Leana’s case was severe. The inward twisting and overextending of Leana’s femurs — located between the hip and knee — caused frequent groin strains. Doctors worried that Leana would one day be unable to bear a child or even stand for long periods of time.

Surgery was elective, but essentially necessary.

“It was called a femoral derotation osteotomy,” Leana recalled. “The premise of the surgery was to chisel through my entire femur, take the femur, and twist it until it was in a proper rotation to what it should be. Then, they placed a rod down through the marrow with a couple pins to keep it all in place.”

The surgery took place in the summer between Leana’s freshman and sophomore years at Wyoming Area. She missed her entire sophomore year of athletics and took her classroom lessons from home.

Leana quit basketball and began playing volleyball in ninth grade at the recommendation of some friends.

“I instantly fell in love with the sport,” she said. “I saw great potential in my play and my team’s play, so I followed through with it all four years.”

Even when Leana was unable to play as a sophomore, the Warriors accommodated her the best they could, saving her a spot on the floor where she sat and cheered the team on from a wheelchair.

“It was beautiful, loving and caring,” Susan said. “Nobody ever forgot about her. She was included in everything and I’m very grateful for that.”

Doctors installed hardware in Leana’s hips during the second surgery in December 2018. She ultimately was cleared to resume athletic activities as a high school junior, but the hardware still hadn’t been removed and it was a burden.

“The first year I came back, I had a hard time keeping up,” Leana said. “I knew something wasn’t right.”

An honor roll student, Leana’s grades flourished while her athletics suffered. Having always had high aspirations, Leana once considered a career in forensics. She has since shifted gears toward medicine.

“I think that my type of background could definitely help a kid, or even an adult, who hasn’t had someone listen to them the right type of way,” Leana said. “I know that’s happened to me multiple times, where a doctor won’t listen because they don’t understand.”

Leading up to senior year, Leana was on track to have the hardware removed from her hips. The coronavirus pandemic struck, however, and even though Leana was not nervous about contracting the virus, she needed to be extra careful because of her compromised immune system.

“When I went (to the hospital), nobody touched me without a glove on their hand and without personal protective equipment all over them,” Leana recalled of her May 15, 2020 operation. “They were very cautious about it and then I stayed in the house after it was done for at least two-and-a-half weeks.”

As she healed, Leana began to feel stronger, quicker and lighter than she had in recent years, but there was still the possibility of fall sports being canceled due to the pandemic. The season began a few weeks later than anticipated, but ultimately did get underway. 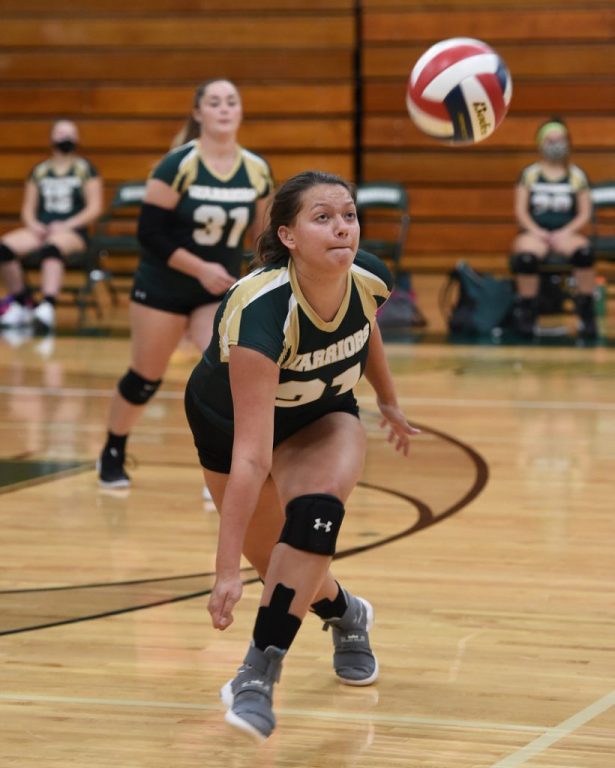 Leana earned a spot in the starting lineup at weak outside hitter, even leading the team in a variety of statistical categories early on. She spiked three aces in the season opener against Tunkhannock, tallied three kills in the next match against Pittston Area, then led the team in digs and service points with five apiece in a loss against District 2 Class 3A title contender Berwick.

“She came back with a passion and a drive that really allowed her to accelerate until she went down with the injury,” said Bonin, who coached Leana on the junior varsity last season until being appointed head varsity coach this season. “One area she improved on dramatically from last year was her serves. She worked on her form in the summer and her serves were hard and fast.”

Finally, the ability that Leana showed in junior high was resurfacing once again, just in time for the end of her high school career.

“She’s a fighter, she’s a player,” Susan said of her daughter. “Oh, to watch her play, she puts her whole self into the game.”

The feel-good comeback story ended abruptly when Leana went up for a hit during a match and landed on one leg, rather than two, snapping the ACL in her left leg. Luckily, she did not reinjure her hips.

While Leana’s track and field comeback was not meant to be, she did have at least a few weeks in which she was playing volleyball at the level she desired. Those memories will last forever, as Leana proved to herself — and anyone who watched her play — that she had overcome adversity that could have crushed her spirit. But she didn’t allow that to happen then and she won’t let it happen this time, either.