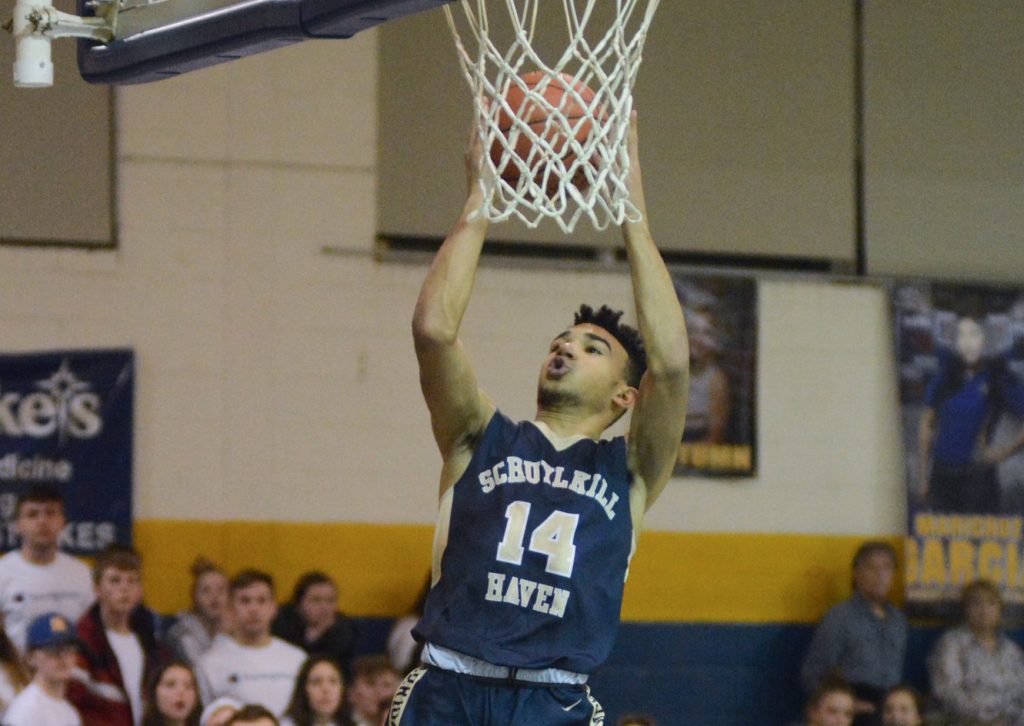 The early 2010s were already hard to watch. Then, the Hurricanes finished the 2016-2017 season 3-19 overall and won only a single game in Schuylkill League Division II play.

Another disappointing campaign in the books.

What was brewing underneath the surface of that 3-19 record, however, was something special.

“A lot of people were saying we were going to go 0-22 that season. I remember we actually won the first game, and one of our seniors on that team was really excited about it,” said Evans, who started as a freshman along with Miller. “We had really high hopes at the moment after winning that first game. Then it was a big downfall.”

Haven lost 10 of its next 11 games and closed out the season with nine straight setbacks.

Fast-forward three years. Those three seniors are the leaders in turning Haven’s program a complete 180 degrees.

“Where we’re at right now, it’s a great feeling to come back from that,” Evans said. “Thinking about, on the road to get here, all the losses — all the tough losses.

“Coach (Fran) Murphy’s saying is ‘hard work and perseverance pays off,’ so that’s like our version of ‘trust the process,’ ” Evans added.

Evans, Carter and Miller suffered some lopsided defeats their freshman year, but that’s the Haven team of old.

Now, Evans, the point guard with deadly range, is one of the top scorers in the area with 20.6 points per game, almost a third of the Hurricanes’ high-energy offense’s 66.8 ppg. Haven’s defense allows an average of just 48.1.

Carter, a 6-foot forward, adds 14.5 ppg and is a standout defender in the paint, while Miller tosses in 8.2 from his guard spot despite suffering a sprained meniscus late in the year.

The trio is together practically all year round, whether they’re on a basketball court, a baseball diamond or relaxing playing video games at one of their houses.

“Even in the summer, every day we were in the gym or the weight room, stuff like that,” Miller said. “There were summer basketball camps, I don’t even know how many basketball tournaments we were in.”

Coming into the program in the same situation with the same goal in mind, they push one another to be their best.

“I think it starts in the offseason and carrying that into the actual season and still working hard,” said Carter, who paced Haven with 23 points in a 67-46 win over Tri-Valley on Feb. 4, the victory that sealed the division crown.

The group finished its sophomore season 10-13 overall and 7-6 in league action, securing a trip to the District 11 Class AA semifinals.

Last year, as juniors, they finally compiled a winning record at 15-8 overall and 10-3 in D-II with another district appearance. It still wasn’t enough to capture the division title, though.

Haven didn’t lose a game in Division II. Its only league loss came to eventual Division III champion Marian before winning seven straight to close out the regular season.

The Hurricanes also took advantage of the graduation losses at Minersville and Lourdes — the Red Raiders had won Division II for three straight years after the Battlin’ Miners won the previous two.

“The work that we put in was destined to get us to this point at some time,” Evans said. “All the hard work we put in throughout the fall and the summer, we were destined to get to this high point one of these years.”

Schuylkill Haven gave Division I wild card Tamaqua a run for its money in the league semifinals at Martz Hall, but the Blue Raiders held on for a 77-71 win.

Murphy took over Schuylkill Haven’s program in 2011, so he got to see the entire development of the current senior class from its fledgling junior high start to its full-grown varsity finish.

He liked what he saw. He knew the potential was there. All he needed was the kids to buy in.

“It was a long process,” Murphy said. “When you see the kids coming up, when you watch them in junior high, you knew that if they were willing to invest the time that we would be successful.

“It was kind of my job then to keep encouraging them to get through the early years of adversity, keep telling them that if they work harder and continue to work, better things will happen.”

Haven’s seniors are leaving their mark on the program, and Murphy expects them to pass down their work ethic to the underclassmen in the program.

“We’re very fortunate as a coaching staff to have these top six kids be pretty talented. Not only talented, but also coachable, good kids, respectful — it’s the whole package,” Murphy said. “I want to give some credit to the parents of these kids. They did a great job early on in getting them ready to play.”

They’ve come a long way in a few short years.

They’re not finished yet.

Schuylkill Haven earned a bye into the District 11 Class AA semifinals as the No. 2 seed. The Hurricanes will take on the winner of tonight’s quarterfinal between No. 3 Moravian Academy (17-6) and Mahanoy Area (13-9) next Tuesday at a site and time to be announced.

“It feels good that our year is going to be on a banner forever,” Miller said of the Hurricanes’ division title. “But we don’t want to be done yet. We want to keep going as far as we can.”