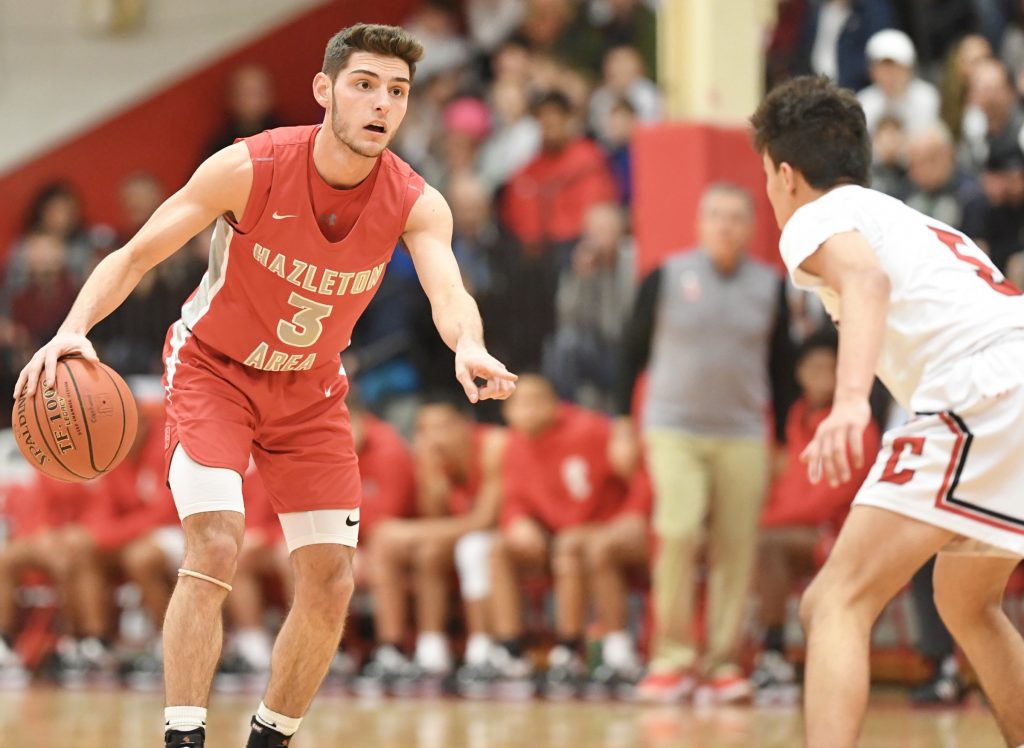 Like any successful, long-running theatrical production, the names and the faces might change, but the Wyoming Valley Conference’s greatest show goes on.

The latest revival of the Hazleton Area-Crestwood boys’ basketball rivalry generated rave reviews Tuesday evening, as a rapt, packed house at the Crestwood High School gym was kept on the edge of its seats from the end of a nail-biting junior varsity thriller through the entirety of a varsity contest that was jam-packed with action and certainly not for the faint of heart.

By the time the scoreboard clock wound down to 0:00 with Hazleton Area winning 62-57, two former understudies had proven themselves quite adept at stepping into leading roles for a Cougar team on a quest to capture its fifth straight WVC Division 1 championship.

Senior guard Andrew Vayda, the most seasoned of all the Hazleton Area players, was primarily responsible for his team’s early success against Crestwood’s normally stingy man-to-man.

He knifed in and around Comet defenders, he knocked down open shots and he got teammates involved on both ends of the floor. Defensively, he kept pressure on Crestwood ballhandlers and made it hard for the Comets to set up their offense.

Twelve of Vayda’s 17 points came in the first half, including a 3-pointer from the corner that ignited a late

surge that put the Cougars on top 36-32 at halftime.

“Andrew got us off to a great start offensively,’’ Hazleton Area head coach Mike Joseph said. “He attacked the basket fearlessly. … He hit shots.’’ 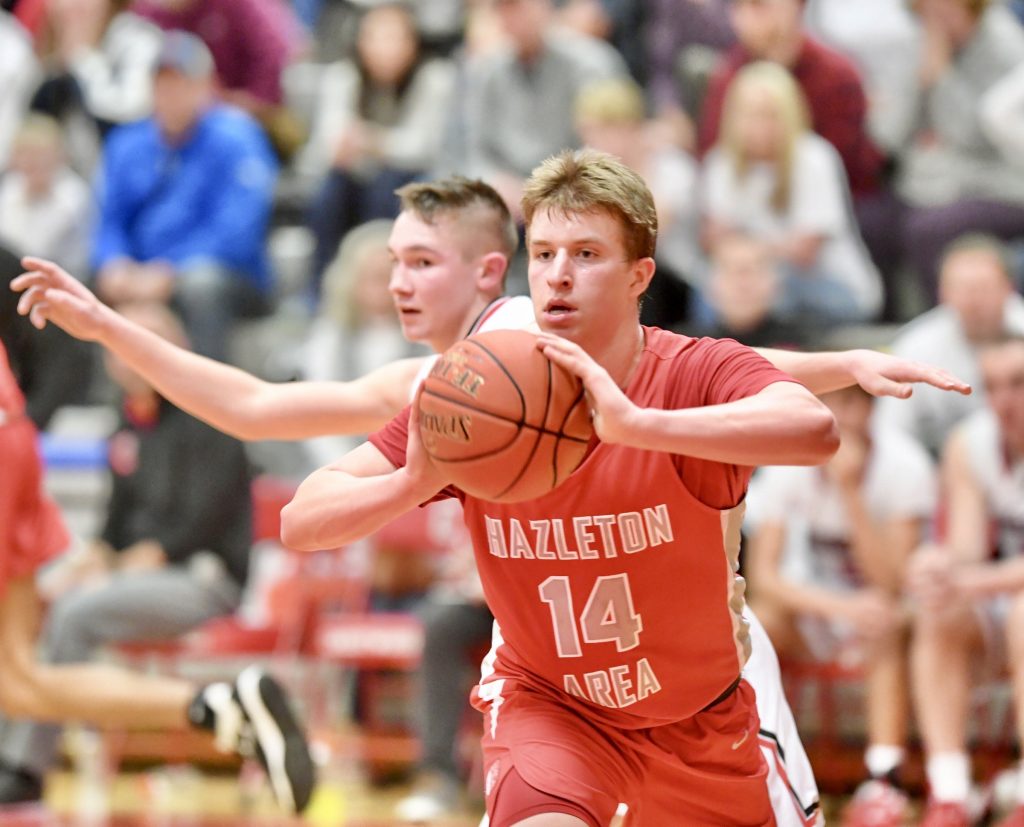 BOB GAETANO / CONTRIBUTING PHOTOGRAPHER
Hazleton Area’s Scotty Campbell passes the ball to a teammate in front of the Crestwood’s Ryan Petrosky during their Wyoming Valley Conference Division 1 boys’ basketball game Tuesday in Wright Twp. Campbell scored 14 of his game-high 22 points in the fourth quarter as the Cougars rallied for a 62-57 win.

As the teams traded the lead seven times in the fourth quarter, Vayda was in the middle of it all, swooping in for one go-ahead layup and drawing a foul on another drive.

Fellow co-captain Scotty Campbell was just as comfortable with the spotlight shining directly on him. He started the Cougars’ scoring with a rebound basket and later ended the first quarter with a turnaround, step-back triple that tied the game at 18.

“Early on he thought we missed him (open) a couple of times, but I said to him that we were getting other stuff because they’re taking you away,” Joseph said. “He was very patient, he got on the glass and he took the ball to the basket.’’

The result was that the Cougars were able to match the Comets basket for basket, even taking a four-point lead into the second half.

“I thought Campbell did a really good job of being patient,’’ Crestwood head coach Mark Atherton said. “I don’t think he got frustrated or tried to force the action, other than maybe once or twice. … He kind of let the game come to him.’’

The second and third quarters didn’t go as well for Campbell and the Cougars as Atherton used at least three different defenders to keep the smooth-shooting senior from unleashing one of his signature barrages, perhaps even wearing him down or unnerving him.

“I feel like when they paid more attention to me, it did open things up for our other players,’’ Campbell said. “Andrew had it going throughout the game … and we were able to get the ball to our big men.’’ 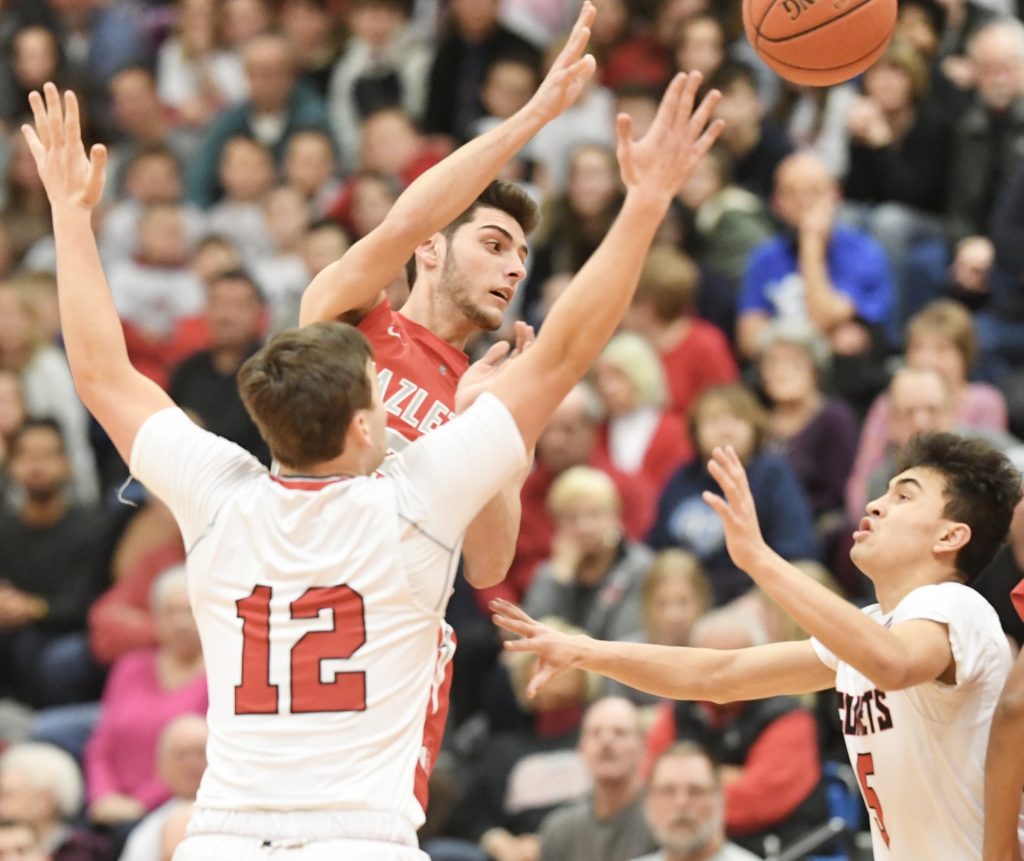 Still, the Comets’ strategy began taking its toll somewhat, as Hazleton Area shot just 1-of-9 from the floor in the third quarter. Vayda managed only one free throw; while Campbell went scoreless and Crestwood surged ahead 46-40.

Then came a fourth quarter that Campbell, Vayda and their teammates will remember for a long time.

Campbell drained a contested 3-pointer to start the scoring in the quarter, then made two free throws to pull the Cougars within one.

When it was over, Campbell netted 14 of his game-high 22 points in the frame, including 9-of-10 free throws. And on his only miss from the stripe, he chased down the rebound and laid in the basket that put Hazleton Area ahead to stay with 1:25 left.

Joseph, a one-time star player at Hazleton High School and Bucknell University, iced many games with his clutch foul shooting. Now it was one of his young proteges doing the same.

“I’ve told (Campbell), ‘You’ve got to get over yourself sometimes and move on to the next shot,’ ’’ Joseph said. “He hit a couple big ones for us tonight. Him at the foul line. I don’t want anybody on our team but him in that spot.’’

It’s a role that Campbell has grown more comfortable playing.

“Overall, I thought we did a pretty good job on him,’’ Atherton said. “But (if) you lose him for a second, he makes you pay for it. He’s a tough player.’’

A bonafide lead actor in the WVC’s greatest show.