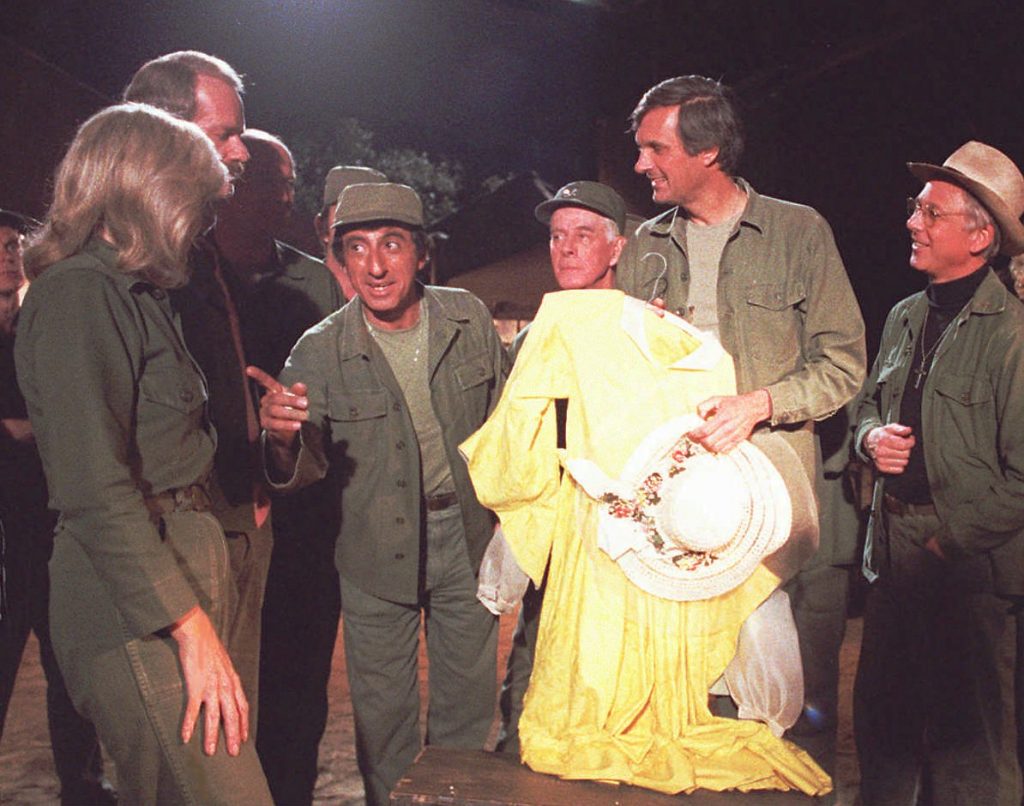 Q: What member of F Troop was the brother of a famous actor, who had a pretty fair career as an actor himself?

A: Hoffenmueller was played by John Mitchum — the younger brother of Robert Mitchum. I just saw the brothers together in a movie. Robert played a drunken sheriff opposite the great John Wayne in the 1967 flick El Dorado. Robert’s character shot at John’s character, a bartender who was reaching for a gun.

John Mitchum also showed up in my favorite movie franchise, Dirty Harry. He played the part of Detective Frank DiGiorgio in the second film, Magnum Force, and the third, The Enforcer, and is fatally stabbed in the third.

Mitchum also played a straight role on F Troop. In probably its most serious episode, F Troop is getting ready to put Agarn before a firing squad for allegedly letting Sgt. O’Rourke get killed by a prisoner they were transporting when he is exonerated at the end. All through the episode, Mitchum is playing a guitar and singing ominous music. By the way, O’Rourke shows up alive, and Agarn is spared.

Today, we will talk about two of the most long-running sitcoms — “M*A*S*H” and “Cheers.”

The reason, I think, each of these shows lasted 11 years was the ensemble cast — and the massive supporting cast each had.

“M*A*S*H” had one of the most brilliant actors and writers, Alan Alda. His quick wit translated into Hawkeye Pierce so well. I can remember one of thousands of superior lines Hawkeye used, “This nurse was so pretty she should have been continued on the next nurse.”

Hawkeye mixed so well with both Trapper John, played by Wayne Rogers, and B.J. Honeycutt, played by Mike Farrell. Then there was the two commanding officers who were off the wall, each in their own way — Lt. Col. Henry Blake, played by McLean Stevenson, and Col. Sherman Potter, played by “Dragnet” vet Harry Morgan; the 4077th’s mind-reading company clerk, Cpl. Walter “Radar” O’Reilly played by Gary Burghoff; the cross-dressing mental case wannabe, Cpl. Max Klinger, who shed the woman’s clothing to succeed O’Reilly as clerk, played by Jamie Farr, who ended up staying in Korea after marrying a local girl; Maj. Margaret “Hot Lips” Hoolihan, played by Loretta Swit, who vamped with Maj. Frank “Ferret Face” Burns, played by Larry Linville; the holy man, Lt. Francis Mulcahy, played by William Christopher, and Burns’ replacement, the pompous snob Major Charles Emerson Winchester, played by David Ogden Stiers, who would show up years later as a prosecutor against the immortal Perry Mason.

Aside from the main cast, there were three recurring characters I thought were interesting.

Remember Sgt. Luther Rizzo, the cigar-chomping motor pool chief? He was played by G.W. Bailey, known to many of us as Captain Thaddeus Harris from “Police Academy” fame. Remember when they took his bullhorn and put shoe polish around the mouthpiece, and gave him an involuntary goutee? After those two parts, Bailey played the same character, Louie Provenza, in “The Closer” from 2005 to 2012, and “Major Crimes” from 2012 to 2018.

Maj. Sidney Freeman, played by the later Allan Arbus, was the resident shrink. He also played a psychiatrist or psychologist in other roles. He said people identified with his character so well they would come up to him and ask him for his advice.

But the best of these recurring characters was Col. Flagg, the nutty intelligence CIA-type officer who was always playing cloak and dagger — especially when it wasn’t called for. Flagg was played very well by the late actor Edward Winter, who had a career in TV from the late ’60s until his death at age 63 in 2001 from Parkinson’s Disease. I remember him in an episode of “:Night Court” when he played the lawyer for Phil who was telling Dan Fielding he wasn’t inheriting any money.

Winter also played a congressman on “Soap” who said he was in love with Eunice Tate, but wouldn’t leave his wife. He also appeared in “The A-Team,” “Dallas” and the comedy movie “Porky’s II.”

That ensemble cast included the leader of the gang and owner of the bar, former Red Sox relief pitcher “Sudden” Sam Malone, played by Ted Danson; his on-again, off-again girlfriend, the bar waitress and self-proclaimed intellectual Diane Chambers, played by Shelley Long; Rebecca Howe, who replaced Long and was the operator of the bar for the corporation that bought it from Malone who gave Sam a job after he returned, and had a quasi-relationship with, including asking Sam to father a baby for her; spitfire waitress Carla Tortelli, played by Rhea Pearlman; Dr. Frasier Crane, played by Kelsey Grammer, the record first of three TV shows he would portray the psychologist; “Coach” Ernie Pantuso, the former coach who worked with Malone on the Red Sox and could take one off the old noggin pretty well and was a noted producer and director with the original “Hawaii 5-0” for one TV show; Woody Boyd, the dim-witted country bumpkin who replaced Coach after he died in real life and on the show, and Dr.Lilith Sternan, Frasier’s wife, played by the lovely professional dancer Bebe Newirth.

The two main foils in this brood were best friends mailman Cliff Claven, played by John Ratzenberger and sometimes-accountant Norm Peterson, played by George Wendt. These two, Danson and Pearlman were in each of the show’s 271 episodes.

The funniest episode, in my opinion, was when Carla was allowed to be a bartender, and made this wicked drink that made everybody’s memory go away.

The next day, as they tried to piece together what happened the night before, Cliff suggested he and Norm go through their pockets. They discovered a receipt from a tattoo parlor, and each, in unison, felt their backsides. They then agreed to go to the men’s room together to see each other’s tattoo.

When they came back to the bar, they sat down, and told each other about the tattoo they saw. Cliff said “Merry mixup.” It seems the tattoo that Norm was supposed to get with “I Love Norma” ended up on Cliff, while Norm’s said “God Bless the U.S. Post Office.”

Some notable people made appearances, but not as many as “M*A*S*H.” “Cheers” introduced a lot of new performers who would become famous later: