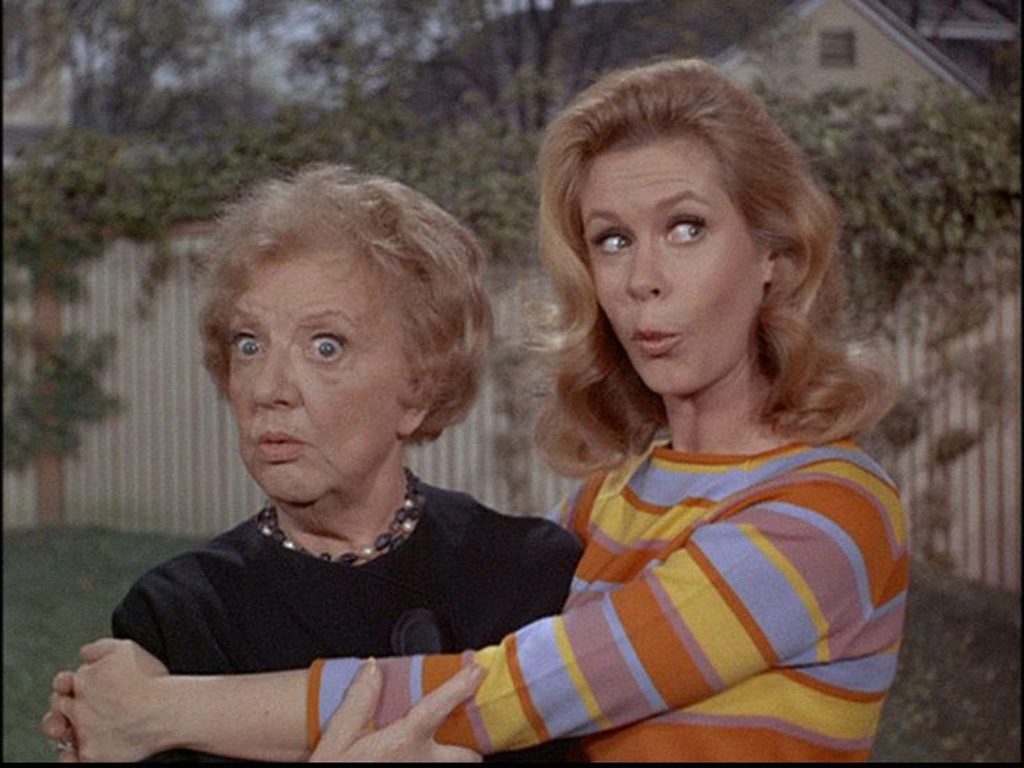 It was the Nose Twitch vs. The Blink.

This time I will talk about what I call the Fantasy Shows.

In prime-time, network TV, networks are always trying to emulate each other’s success.

So when one network comes up with a winner, the others try to copy it.

The most successful of these shows was “Bewitched,” the story of a mortal man married to a witch. Throw in a witch mother-in-law — who was a witch in more ways than one — and the comedy flows.

For eight TV seasons, Samantha and Darrin went through life in this really mixed marriage.

The supporting cast was pretty good, too.

Of course, Endora, played by actress Agnes Moorhead, the mother-in-law in question, led the troops, closely followed by her brother, who she wasn’t close with, Uncle Arthur, played by one of my favorite TV comics, Paul Lynde.

Then there was Dr. Bombay, the “witch” doctor played by veteran character actor Bernard Fox — who would be familiar to Hogan’s Heroes fans like me as the bumbling British RAF Col. Crittendon.

Of all the shows in this genre, it lasted the longest, eight years.

The year after Bewitched debuted on ABC, NBC answered in 1965 with “I Dream of Jeannie,” about an astronaut who finds a bottle on the beach where his space capsule landed, and a genie pops out — who now thinks the astronaut, Air Force Captain (and later Major) Anthony Nelson, is her master for finding the bottle and “releasing” her from it.
Only Tony Nelson’s best friend, fellow astronaut Army Major Roger Healey, knows about Jeannie, who later becomes Tony’s fiance and wife — because she won’t let him near another woman anyway.

How about that Tony Nelson? He has this beautiful, half-naked blonde Barbara Eden chasing him around the house and calling him Master, and he wanted to fly in space?

Although it lasted only three TV seasons, and was mostly in black and white, “My Favorite Martian” was just as funny, as the martian, played by actor Ray Walston, created problems for his mortal roomate, newpaper reporter Tim O’Hara, played by actor Bill Bixby.

Trying to capitalize on the popularity of the Francis the Talking Mule movies of the ’50s, Mister Ed, the talking horse was born.

Ed would only talk to architect Wilbur Post, whinneying “Whhhhhhhilburrrrrrrr!” and making Wilbur look like an idiot by making him do crazy things. Ed distracted Wilbur so bad half the time he didn’t notice his sexy blonde wife, Carol, played by actress Connie Hines.

Some later shows in the genre are “Mork and Mindy,” and one of my all-time favorites, “Third Rock from the Sun.”

Mork and Mindy was about a being from the planet Ork, Mork, who landed on Earth and tried to learn how Earthlings behaved. He would report to his superior, Orson, at the end of each episode, what he learned. That series lasted four years, and starred the legendary Robin Williams, and Pam Dawber, who is Mrs. Mark Harmon. The couple has two children together.

“Third Rock from the Sun” was about four people sent to Earth to learn about the planet and its people. The most interesting, and funny, aspect of the show was how the writers got the characters to look at everyday life through the eyes of people not from Earth. Some of those observations are hilarious.

First all, their names. They wanted to blend right in, be normal, average people — just like any other Tom, Dick or Harry. And that’s what they named themselves.

Harry — who had no job, and slept on the washer — was played adeptly by French Stewart. We watched Joey Gordon-Leavitt grow up on the show as the kid, Tommy. Christine Johnston played the pretty, but tough Lt. Sally Solomon.

The relationship that developed between Drs. Solomon and Albright was cute. Let’s not forget another “Saturday Night Live” alum, the late Jan Hooks, who played the trashy daughter of the Solomons’ landlady, Mrs. Dubcek, played by the late Elmarie Wendel. She was Harry’s love interest. One of the funniest episodes is the Thanksgiving episode, where they smear things like mashed potatoes on each other’s face, culminated by Harry putting the turkey on his head.

When Thanksgiving came around, Dick thought it was the Apocalypse — because no one was in their offices, and people were scurrying to the supermarket. During the day, he had a fight with Tommy, and Tommy stormed out. At the end of the day, Tommy told Dick he learned it was normal for a family to fight on Thanksgiving. The message was that we do dumb things on holidays, but we survive.

But the funniest episode, I thought, was when they accidentally knocked out Mrs. Dubcek with a love potion they mixed for a play, and Harry dressed up like her and imitated her, “Very Niiiiiiiiice.”

QUESTION: What was Willy’s last name on “Mission: Impossible”?

QUESTION: Was Peter Graves the only leader of “Mission: Impossible”? Is Graves his real name?

ANSWER: Although “Good Evening Mr. Phelps” became a catch phrase attached the the series, he wasn’t. In the first season, the original leader was Dan Briggs, played by actor Steven Hill — who you will know better as New York District Attorney Adam Schiff from the original “Law and Order.” Graves was born Peter Aurness. Maybe you can guess his brother. If you guessed James Arness, Matt Dillon from th TV version of “Gunsmoke,” you are right. Graves was another family surname Peter adopted. By the way, the radio Matt Dillon was none other than William Conrad, better known as TV private eve Frank Cannon. \Conrad, and his beautiful voice, was also the narrator of “The Fugitive.”

QUESTION: Were any actors who starred in the TV “Get Smart” in the 2008 movie starring Steve Correll and Anne Hathaway?

ANSWER: Yes. Although there was a sinister version of Siegfried, Bernie Kopell did make a cameo — and used his goofy accent.

QUESTION: Do you know who Lynda Day George’s husband was?

This is going to be a toughie.

Aside from being Col. Crittendon, Bernard Fox also played a bumbling military officer. What was the name of the officer, and what sitcom did he appear in?

HINT: It’s one of the military sitcoms.

QUESTION: What other popular TV series did Larisa Oleynik, Alyssa in “Third Rock from the Sun”, star in as an adult?

QUESTION: What other TV series did Bill Bixby star in?

QUESTION: Were any members of the cast of the TV show in the 1999 movie “My Favorite Martian?”