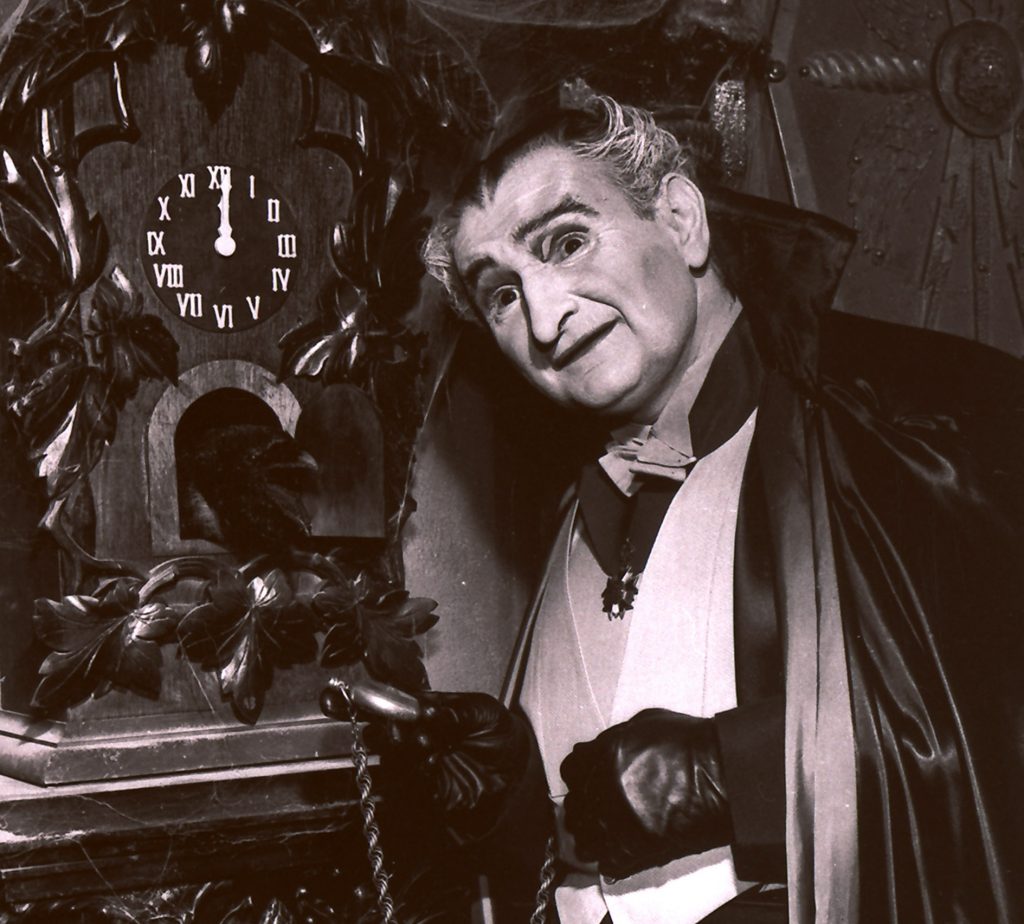 ‘The Addams Family’ vs. ‘The Munsters’

Our topic this time is a narrow one we will call The Addams Family vs. the Munsters.

So which are you, an Addams fan or a Munsters fan?

I lean toward the Addams, but I like the Munsters, too.

Both series are two-season wonders that have turned into cult classics.

Both series began as color television began, but were kept in black and white to add the macabre effect.

The Addams Family was led by Gomez, played adeptly by funny man John Astin. That crooked smile he had was the hallmark of the Addams brood.

Gomez would stand on his head doing his “Zen Yogi,” pull lit cigars out of his long-out-of-fashion pin-striped suit or a locked safe, “I was looking for this,” or throw knives at Uncle Fester, when Fester wasn’t lying on his bed of nails. Fester, played by famed child actor Jackie Coogan, who in real life, was cheated out of almost $4 million by his stepfather. The case led to a law that protects child actors by funneling their earnings into a trust fund. Don’rt forget how Gomez would open the drawer in a living room table and pull out handfuls of cash.

Morticia — though she had no legs — was a pretty sexy kitten, played by Carolyn Jones. She would have an occasional go at a lute, and sing on the five-note Oriental scale — when she wasn’t looking after her plants, especially the plant that ate raw hamburger

Lurch the butler, was played by Pittsburgh-born Ted Cassidy, and for my money, was the funniest. When Gomez would propose something questionable, Lurch would groan, “Ohhhhhhhhhho.” That was the funniest line on TV in the ’60s.

His other two big lines were, “You rang” when one of the Addams pulled the gong that made the house shake. Or when a visitor came to the house, Lurch would say in that insanely deep voice, “Follow me.”

Outside of that, the funniest thing the Addams Family did was actually quite risque for the time. Whenever Morticia would speak French, Gomez would freak out, grab her arm, and start kissing up her arm. “Tish, that’s French.”

Little Wednesday, played by actress Lisa Loring — who would have an acting career as an adult — would come off with some good ones. Ken Weatherwax, who played Wednesday’s brother, Pugsley, had a career as a techncian — ever hear of a key grip? — after this.

Don’t forget Grandmama — played by actress Blossom Rock. Need I say any more about her? Born Edith Marie Blossom McDonald in Philadelphia, she was the older sister of actress Jeanette McDonald. She married Clarence Rock, and together they toured Vaudeville as performers. She also used the name Marie Blake.

There was also Cousin Itt, played by Felix Silla, the short, hair lump that mumbled a language only the Addams clan could understand. Born in Italy, Silla suffered from dwarfism, but used his career as a multi-talented circus performer to become a Hollywood stuntman. In fact, he nearly died doing a stunt in the 1984 film “Indiana Jones and the Temple of Doom” when a he was trapped underneath a raft with a faulty life vest.

And, whatever you do, don’t forget Thing, the hand that came out of a box — and there were boxes all over the house — to deliver the mail.

“Woop Woop Woop. Mail Call. Thank You, Thing,” and Thing would hand Morticia the mail. In the movie, “Thing” was thinking out of the box, running all over the place.

The Addams Family lives on in infamy. The 1991 motion picture starring Raul Julia as Gomez, Angelica Huston as Morticia and Christopher Lloyd as Uncle Fester joins the new animated version starring actresses Charlize Theron as the voice of Morticia, Chloe Grace Moritz as the voice of Wednesday, and, can you believe it — as the voice of Cousin Itt, Snoop Dogg!

The Munsters were eerily — they already were, anyway — similar to the Addams clan.

Their was the head of the household, literally, Herman, who was a Frankenstein ripoff right down to the bolts in his neck, played by veteran actor Fred Gwynne.

The mother was an attractive brunette, actress Yvonne DeCarlo, who, like her counterpart, had her good looks hidden by the makeup she had to wear for the part.

There was Grandpa, played by Al Lewis, who would suddenly turn into a bat or a wolf, and spent most of his time in his lab in the basement mixing potions — when he and Herman, the man he created for his daughter to marry, weren’t getting into some kind of trouble together.

There was the kid, little Eddie, whose Teddy Bear was a werewolf doll, and his cousin, Marilyn, a beautiful blonde played by two actresses, who thought she was hideous because every time she brought a young man home, he would run — when he got a look at her family. Poor Marilyn.

I especially like the episode when the Los Angeles Dodgers try to sign Herman to play baseball because he can hit the ball 800 feet, on the say-so of legendary manager Leo Durocher.

QUESTION: What other TV series did Bill Bixby star in?

ANSWER: Bixby would later star in “The Courtship of Eddie’s Father” and “The Incredible Hulk.”

ANSWER: One of my favorites, “Sledge Hammer,” as well “Blossom.”

QUESTION: Were any members of the cast of the TV show in the 1999 movie “My Favorite Martian”?

ANSWER: Yes. Walston did a cameo as another Martian in the film starring Christopher Lloyd as Uncle Martin, and Jeff Daniels as Tim.

QUESTION: Aside from being Col. Crittendon, Bernard Fox also played a bumbling military officer. What was the name of the officer, and what sitcom did he appear in?

HINT: It’s one of the military sitcoms.

QUESTION: What other popular TV series did Larisa Oleynik, Alyssa Strudnick, star in as an adult?

Can you name the actresses who played Marilyn?

QUESTION : What other TV series did Herman and Grandpa play in together?

QUESTION: Who was Muldoon’s partner on “Car 54, Where Are You?”