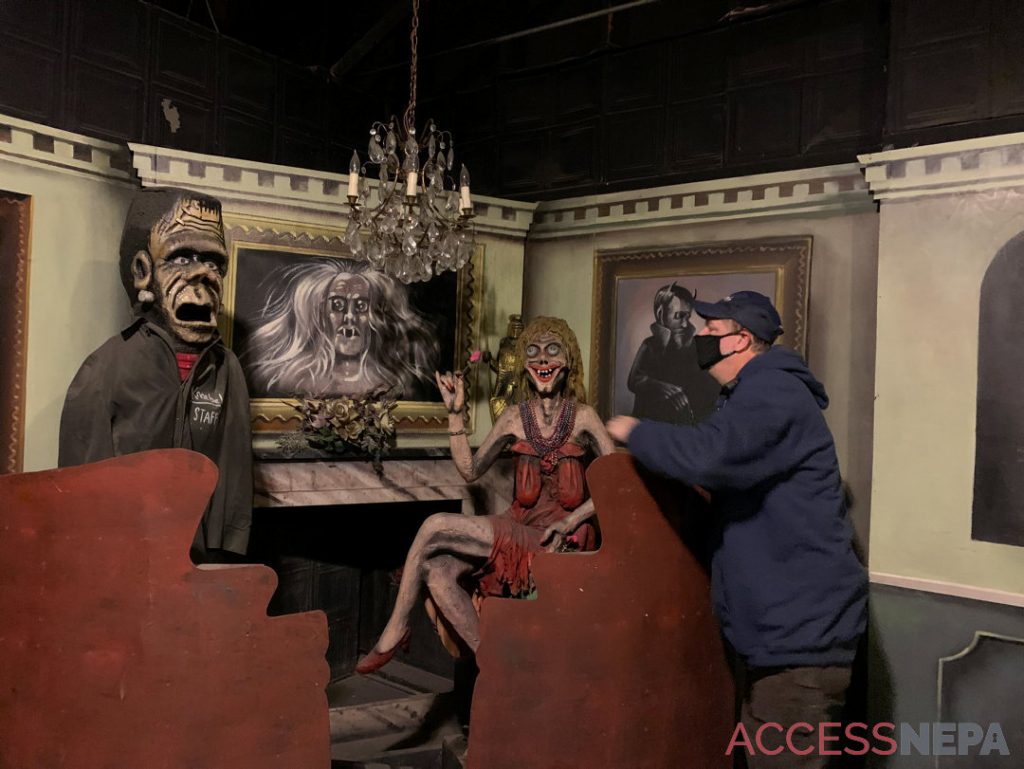 ELYSBURG — The fog hanging in the Elysburg air on a Saturday morning lifts when Drew Kanaskie comes to Knoebels Haunted Mansion.

Kanaskie, the caretaker of the dark ride, is no shambling Lurch. Unlike the Addams family butler, he has an infectious joy when he talks about sanitizing the ride vehicles and designing the gags and characters inside. Kanaskie took over the job of caretaker four years ago from Dave Wynn, the original caretaker and one of the mansion’s builders. Kanaskie used to scare his mom by hiding behind the door and popping out. She’d scream, but then she’d laugh. He wants park guests to feel the same way when they ride the mansion.

“I enjoy seeing people have fun,” he said. “I like seeing them with a smile on their face. I enjoy people walking with their friends saying, ‘You have to ride this, it’s not so bad.’ I like that I get to create an imaginary world.”

Kanaskie makes his spooky props in a workshop deep inside the mansion. He works to the tune of screaming riders, and he couldn’t ask for a better soundtrack.

“A roller coaster is always a lot of fun,” he said, “but it’s always the same ride. When you think about a haunted house, you can change the experience by changing the surprises that are inside.”

Knoebels’ Haunted Mansion opened in 1973, and has since become the holy grail of dark rides — amusement park rides that are indoors. It is a routine finalist in Amusement Today’s Golden Ticket Award for Best Dark Ride, and is the perennial favorite of members of the Darkride and Funhouse Enthusiasts, whose website says, “We keep our members in the dark.”

“The mansion is one of the disappearing traditional dark rides,” said DAFE director and co-founder Rick Davis. “Our members usually point out that the mansion has a backstory, good sound effects, good light, perfect time and more importantly, it is well maintained so everything works properly.”

Kanaskie likes to say, “If it’s broken, we’ll fix it. If it doesn’t work, we can make it.”

Since the opening of the Haunted Mansion, many similar rides have closed or burned to the ground (papier-mache monsters are highly flammable). Others have metal fencing to prevent vandals from destroying the scenery. This is why no one-price ride plan at Knoebels includes the mansion. That, and startled guests used to punch the snake that comes out of the grandfather clock in the face. There is no screen protecting the prop, or the riders, for good reason.

“If you have that wire between yourself and the prop, it feels much less scary,” Kanaskie said.

There are two signs that hang over the mansion’s front door: “No smoking” and “Don’t touch spooks.”

The Haunted Mansion actually has a storyline — frequent riders will uncover clues about an ancient curse and an explorer named Ishmael Hepple. During his time as caretaker, Kanaskie has refined the ride’s story and has added new gags, while still following the Knoebels house style. The grotesque, colorful designs and warty monsters that were all the rage in the ’70s are becoming an endangered species. Some have called the mansion an example of American folk art.

Every good horror filmmaker knows that what you don’t see is far scarier than what you do. Lighting, shadows and stretches of darkness are what makes the mansion so chilling — riding it with the lights on and the mechanisms exposed is about as scary as a walk in the park. Like any good scary movie, the dark atmosphere builds up to a climax — the legendary truck gag, burned into the memory of everyone who’s ever visited the mansion.

“By this point of the ride, you’ve been startled for half a dozen times and your anxiety is beginning to peak,” Kanaskie said. “And then it happens — brrrrrrp!”

The “truck” is a refrigerator shelf and a bunch of lights mounted on the wall.

Kanaskie has already had to make a new face for the ghoulish organ-player with bulging eyes. The original was made by Dick Knoebel, grandson of park founder Henry Knoebel, company president since 1988. The organ’s “pipes” are cardboard Knoebel Lumber shipping tubes. The books in the library scene include cookbooks, a high school physics textbook, “eBay for Dummies” and “Do it Yourself With Plastics.” Over time, the dust and cobwebs have become real.

The decaying female corpse in front of the fireplace is Ishmael’s wife, Ruth. Ruth was made in the 1960s by Bill Tracy, a legendary horror artist whose emphasis on gruesome exaggeration became the standard for haunted houses. One of the tombstones in the graveyard scene has the name “Tracy” on it in tribute.

“Bill Tracy was the guy that you called if you had a haunted ride that you needed characters and props for,” Kanaskie said.

Artist Matt Rusnak painted the mansion’s backdrops. He found ways to make a haunted house on a budget, such as a suit of armor made of painted plywood. In the dark, no one knows the difference. In recent years, artist Jerry Sassani, of Kulpmont, has painted backdrops, including portraits of Ishmael. Sassani based the portraits on his grandfather, but Kanaskie sees a mix of Gene Wilder and Vincent Price.

“It’s sort of the big fish in a small pond,” Sassani said about the mansion. “We’re one of the last traditional dark rides in the country.”

Sassani’s illustrations are inspired by fantasy and science fiction (He had a Dungeons and Dragons game scheduled for the night of this interview.) and horror writers like H.P. Lovecraft.

“We’re trying to maintain the original integrity of the dark ride,” he said. “We’re not trying to do it like Disney or Universal. There’s a handcrafted feel.”

The mansion’s kitchen scene contains one of Kanaskie’s favorite set pieces, an oven monster whose eyeball is a painted football. 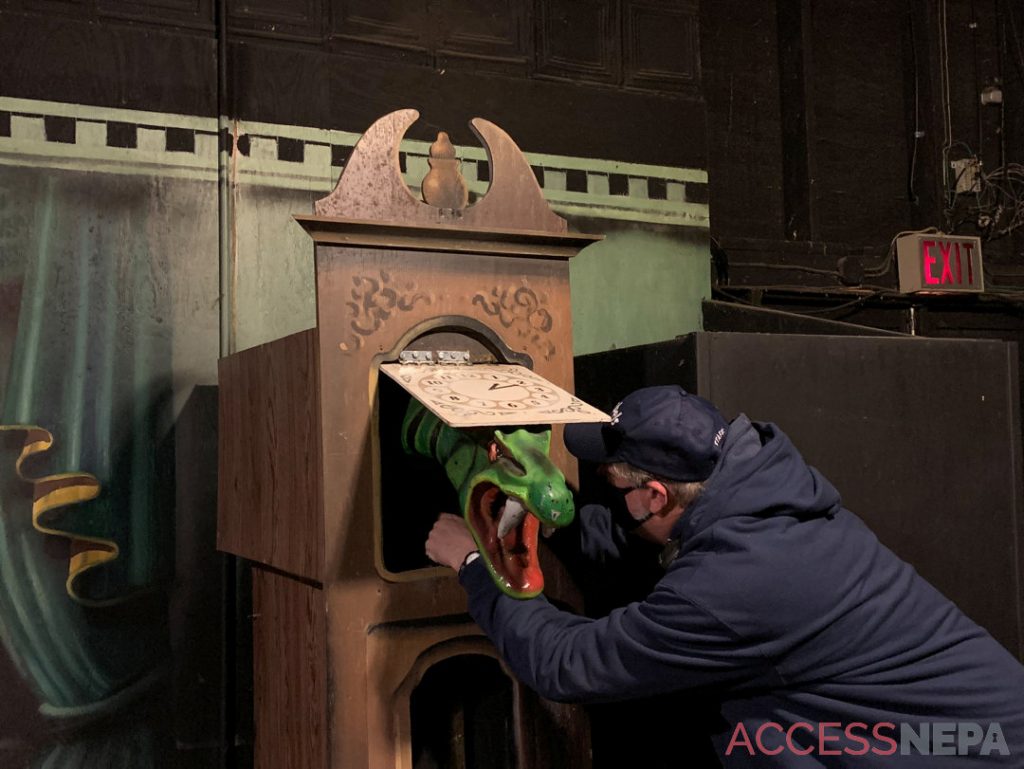 Ruth was a refugee from an amusement park in Pittsburgh.

Kanaskie designed a witches’ brew for the kitchen, made of severed fingers and onion slices. On closer inspection, the fingers turn out to be his own — he cast them in plastic. The skull bubbling up to the top of the clogged sink is another nod to “Young Frankenstein” — its features are based on Marty Feldman, who played Igor. The monster hand coming out of the cake is a cast of Sassani’s.

“He had a hand in working in the Haunted Mansion!” Kanaskie said.

Kanaskie hid a toy dachshund in one of the rooms he designed. He loves telling people that there’s a dog hidden in the Mansion. When they ask him where it is, he says, “That’s the fun. You have to ride it until you find it.”

Hidden inside the Mansion’s final scene, there is a secret collection of items that guests lost during their ride — a pacifier, a rubber duck, a drink umbrella. These items sit and collect dust. In other words, they become perfect for the mansion.

“There are a lot of scary rides that use computers and all sorts of other fancy things to make them work,” Kanaskie said. “But this is simple. The simple little bits that are inside, the simple jump scares and the gags and the silly scenery, always work.”