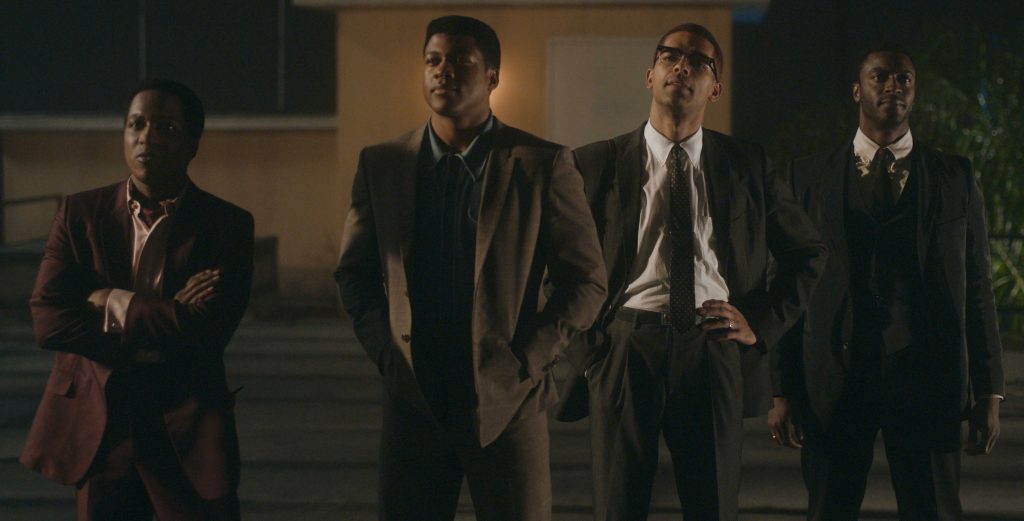 Review: “One Night in Miami”

In the span of a month, two streaming services released two play to movie adaptations. “Ma Rainey’s Black Bottom” hit Netflix on Dec. 18, while Amazon Prime released “One Night in Miami” on Friday. Both have a limited cast with most of the action taking place in the same room. Both tackle the issue of racial injustice. Both rank among the best films of 2020.

While the four did meet after Clay defeated Sonny Liston to claim the heavyweight championship, the conversation among the legends is fictional. Also, some of the events in the individuals’ lives are moved around to fit the movie’s purpose. Despite the creative license, “One Night in Miami” works beautifully as it balances the perspectives of the four men on the civil rights movement and their roles in it. The conversations in a little hotel room peel back the historic figures’ layers to reveal their vulnerabilities.

I don’t know from experience, but I think it’s safe to say directing a film is no easy task. Then, incredibly talented actors such as Regina King come along, take a seat in the director’s chair for the first time and pilot one of the best films of the year. King no doubt had talent and a strong script to help her along the way, but when every actor is on top of his game, she deserves a ton of credit. She navigates the hotel room seamlessly, leaves the claustrophobic space with either all or some of the characters to enhance the film and sets up flashback and prologue scenes to perfectly complement the film’s focus. The Oscar-winning actress needs to find time to keep directing.

Goree is an up-and-coming actor who clearly has talent. I hope portraying a legend like Clay can give him the break he deserves. Unfortunately, the “Ballers” and “Riverdale” actor had the unenviable task of following up Will Smith’s Oscar-nominated performance in “Ali” 20 years earlier. I couldn’t help but think at times Goree was doing an impression of Smith doing an impression of Clay. That’s tough because it’s not his fault somebody great already helmed that role. What stood out more was his ability to go toe-to-toe with great actors. I’m looking forward to Goree earning a role that he can make his own.

Speaking of unenviable tasks, Ben-Adir followed up Denzel Washington’s iconic performance as Malcolm X. Ben-Adir holds his own as he embodies a Malcolm X at his most vulnerable. He finds himself in the middle of the film’s main battle between Cooke and Malcolm X. Malcolm X believes Cooke is wasting his voice on pop songs when he could give lyrics deeper meaning to help the civil rights movement. Cooke says he does plenty to help the Black community through other means. Ben-Adir perfectly captures that fear, anger and emotional exhaustion as he doesn’t want the civil rights cause to slip away with his impending death. Knowledge of his future assassination does allow the audience to further sympathize with Malcolm X as he’s forced to lead with a target on his back.

While Odom has the flashiest role as Cooke, he also shines brightest of the four. The “Hamilton” standout once again showed off his beautiful voice in “One Night in Miami.” He recreates some of Cooke’s performances, including the powerful “A Change is Gonna Come” on “The Tonight Show Starring Johnny Carson” that gorgeously brings the film together at the end. Odom’s song during the end credits, “Speak Now,” perfectly complements the film and should be nominated for best original song come Oscar time. I haven’t even gotten to a lot of his acting yet. As I mentioned earlier, Cooke is part of the main bout in the film. Odom goes toe-to-toe with Ben-Adir, showing his swagger as well as his pain. He commands the room, and his mannerisms, posture and voice make him a believable King of Soul.

From flashy to understated, Hodge’s performance should not be overlooked. Always a great character actor from his time on the TNT show “Leverage” to roles in “Straight Outta Compton” and “Hidden Figures,” Hodge embodies Brown. While I wasn’t alive during his playing career, watching interviews and hearing him talk today, Hodge had him pegged perfectly. Hodge helms a strong prologue scene that complements a more powerful sequence between Brown and Malcolm X later in the film. This is the best I’ve seen from him and his subtle performance shouldn’t be lost among the film’s greatness.

The performances are bolsters by an emotionally powerful script that explores the vulnerabilities of these god-like figures. It also shows the four perspectives of these men, in which all four prove relatable. It engages the audience and provokes thought.

While “Ma Rainey’s Black Bottom” stands out slightly more because of its stronger performances from Chadwick Boseman and Viola Davis, “One Night in Miami” deserves consideration for the best film of the year. Debut director King, the actors and script propel this movie to greatness. We’ll continue to discuss this film leading up to one night in April. 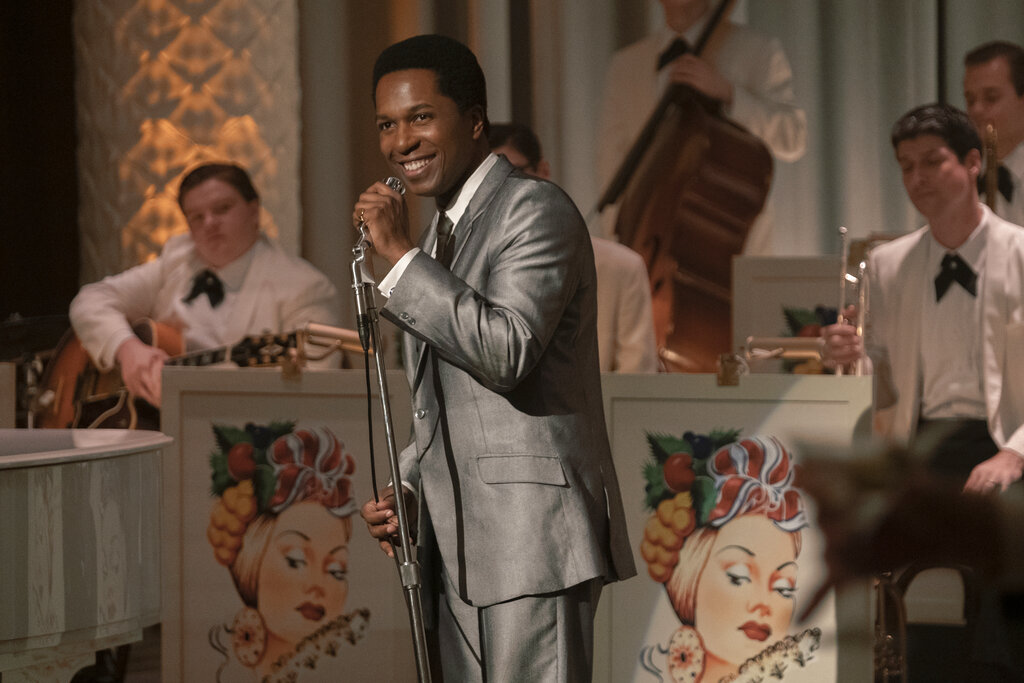 Four legendary greats. One hotel room. And a fascinating meeting of the minds.

When Black icons Malcolm X, Cassius Clay, Sam Cooke and Jim Brown get together on a celebratory evening in 1964, we get to be the fly on the wall in “One Night in Miami.” Blending fact with fiction, the engrossing drama offers a timely look at the civil rights movement. With its stirring dialogue, phenomenal performances and an impressive directing debut from Regina King, “One Night in Miami” sizzles as one of the best movies of 2020.

The drama delves into the intersection of activism, sports and entertainment. After Cassius Clay (Eli Goree) wins his championship bout, the “World’s Greatest” boxer gathers his friends – activist and spiritual adviser Malcolm X (Kingsley Ben-Adir), soul singer Cooke (Leslie Odom Jr.) and football star Brown (Aldis Hodge) – to celebrate his victory in the ring. But on the fateful night before Clay plans to pledge himself to Islam – and become Muhammad Ali – their hotel room becomes a ring of its own as the friends spar over their roles in the state of race relations.

Based on a stage play, “One Night in Miami” presents a fictionalized account of the real-life meeting. The soul-baring conversations lift the veil on the unique bond the men share as influential Black figures in a world where change is coming, however slowly. Every word of dialogue lands with the impact of one of Clay’s punches.

Though the men have achieved power through their respective careers, they all struggle to wield it as they push against the forces of racism. As our nation confronts a reckoning of racial injustice, “One Night in Miami” proves especially relevant as the cases of George Floyd and Jacob Blake, among others, make us question how far we’ve come in the battle for equal rights.

Each actor has an important part to play as the film explores the complexities of their friendship. The drama excels at exploring the intimate dynamic of all four men together, but also at splitting them up into pairs, making each man more accessible to the audience. Kemp Powers, who fashioned the screenplay from his own play, gets inside the men’s heads to look at the internal conflict each one faces.

Malcolm X fervently believes in the cause of civil rights. But “One Night in Miami” reveals the militant activist’s vulnerability as he looks to separate from the Nation of Islam after becoming disillusioned with its leadership. In a breakout performance, Ben-Adir taps into the revolutionary leader’s weariness from the schism, as well as his paranoia from being followed by the FBI. Ben-Adair finds the relatable humanity in the larger-than-life figure, who was assassinated within just a year of the film’s events.

Odom Jr. reaches into Cooke’s soul to bring the King of Soul to life onscreen. Cooke faces harsh criticism from Malcolm X as he tries to appeal to white audiences with his music. But much like Ma Rainey in another recent film adaptation of a play, “Ma Rainey’s Black Bottom,” Cooke knows how to play the game and work within its rules to establish a platform for Black artists. When Cooke steps into the civil rights movement with “A Change is Gonna Come,” Odom delivers a beautiful rendition of the song, providing a moving affirmation of the character. The Tony Award-winning actor deserves Academy Award consideration for his performance and for his original song for the film, the emotionally charged “Speak Now.”

As Clay, Goree strikes the right balance of arrogance and insecurity. Though assured of his greatness in the ring, the overbearing boxer faces a crisis of faith when he gets cold feet before making the switch to become a Muslim. As the actor I was least familiar with, Goree surprised me by deftly taking on the near-mythic figure.

Hodge gets the least meaty storyline of the four main characters. But as the trailblazing Brown, Hodge conveys the NFL Hall of Famer’s dilemma in leaving the familiar gridiron for the movie sets of Hollywood. The actor’s best scene occurs early in the film, when what starts as a friendly encounter with a family friend (Beau Bridges) ends with a stunning confirmation of prejudice.

Though “One Night in Miami” is a showcase for the men in front of the camera, the drama features strong work by women behind the camera.

In her directorial debut, the astute King demonstrates a confident command and remarkable flair for the ambitious task at hand. The Oscar-winning actress and “Watchmen” star shows herself to be a force to be reckoned with across various aspects of filmmaking. I honestly can’t wait to see if the Academy will recognize King with a directing nod her first time out.

The film’s gorgeous cinematography is overseen by Tami Reiker, who also lensed “The Old Guard,” a Netflix actioner I really enjoyed. Veteran costume designer Francine Jamison-Tanchuck, whose resume boasts 1989’s “Glory,” styles the men in conservative suits. The clothing choice lends authenticity to the time period and highlights their uncertain roles in the civil rights movement.

The powerful “One Night in Miami” offers a masterful look at what could have happened when four greats got together, inciting an intellectual matchup. The sobering examination of race relations still resonates today amid a climate of racial strife. With its spellbinding performances and fantastic direction, the engaging drama may find itself battling in a different kind of ring this spring – the Academy Awards.