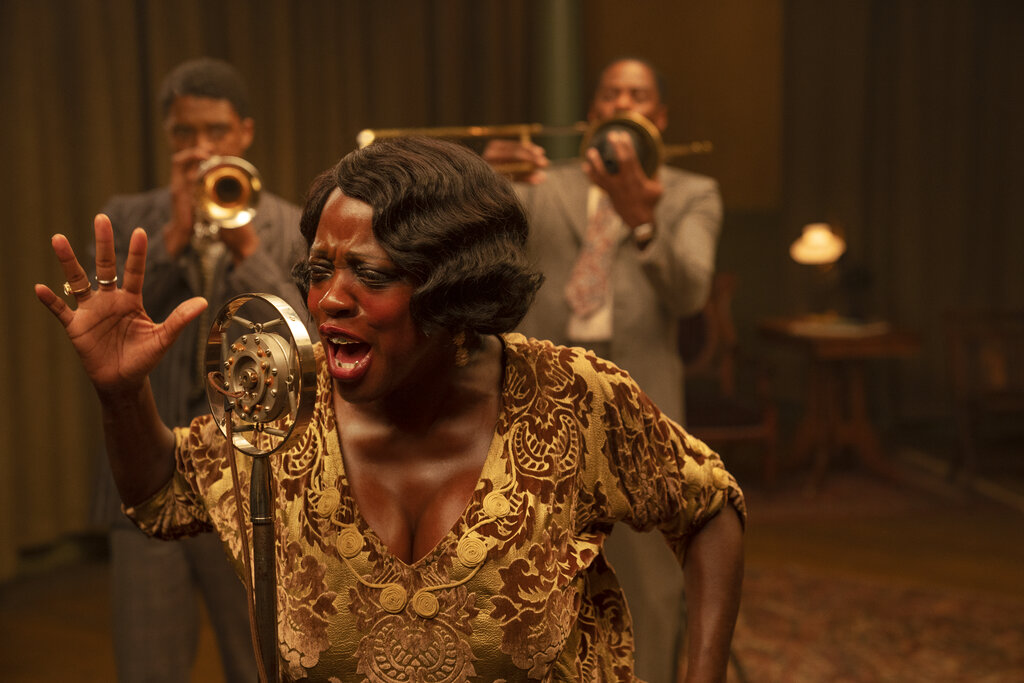 The loss of Chadwick Boseman is one of the many tragedies of this horrid 2020. Fortunately for us, he battled through cancer to give the world one last great performance in “Ma Rainey’s Black Bottom.” That would have been enough for me, but this Netflix film proves so much more.

Based off a play of the same name written by August Wilson, “Ma Rainey’s Black Bottom” delves into 1920s America and Blacks fighting for their places in society. The story is told through the lens of co-leads Ma Rainey (Viola Davis) and Levee (Boseman). Her fans proclaim Ma Rainey the “Mother of Blues,” while young upstart Levee plays the trumpet in her band. Levee hopes to reach her level of stardom, while Ma Rainey looks to keep it. Despite their different statuses, both search for the same thing — respect.

The 1-hour, 30-minute film takes the audience into one day of the band’s life at a recording studio in Chicago. Before that, it quickly establishes Ma Rainey’s audience and the escape she provides Blacks in the south. A beautiful and joyous scene shows fans gather in a tent to see and listen to the “Mother of Blues.” The film then shifts to the recording studio as we meet the band. The character introductions are handled very well as we meet Cutler (Colman Domingo), Toledo (Glynn Turman) and Slow Drag (Michael Potts). They have an immediate chemistry bolstered by quick-paced dialogue and strong acting. Domingo was a pleasant sight as he is awesome in everything with his unique voice.

Levee (Boseman) walks in next and immediately commands the screen. Boseman gives the best performance of his career as he effortlessly shifts emotions throughout the film. His smile lights up the damp room as his youthful exuberance and arrogance overwhelms the other members of the band. However, his pain is always present in his body language before it eventually bursts out of him into rage and sadness. His smooth transitions make sequences real and raw. Boseman also learned to play the trumpet for his role and the commitment paid off. His final role may yield the late actor his first Oscar.

Speaking of the Academy Awards, the great Davis gives another stellar performance in her illustrious career as Ma Rainey. She already has an Oscar for her role in “Fences,” and has a chance to add another one here. Ma Rainey is a tough role to play as Davis displayed brashness and likability. I fell in love with the character because of what Davis brought to the table. The writing was also brilliant, when she explains why she is the way she is. While she comes off as a diva, she has a heart. Davis perfectly captures the character with her dynamic performance.

The film also uses metaphor effectively. Some might think it’s a little on the nose, but Levee’s recurring battle with a door perfectly captures the essence of his fight for fame. The Chicago heat also beats down on the characters throughout the film, which helps show the emotional weight members of the band carry with them. The sound design also represents the time period in music beautifully.

Also, be sure to watch the 30-minute making of that comes with the film.

“Ma Rainey’s Black Bottom” proves one of the best movies of the year buoyed by masterful performances and an emotionally gripping script. Boseman blessed us with the greatest performance of his career, and the film honors his legacy. 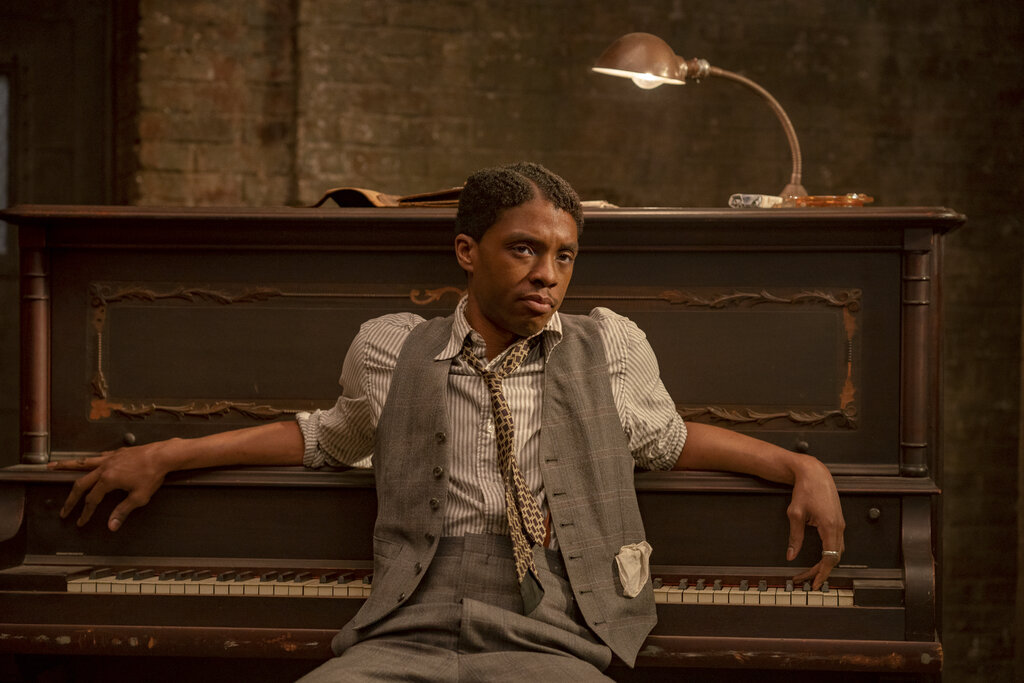 The tension-filled adaptation of the August Wilson play makes a seamless transition from the stage to the screen. The emotionally and racially charged drama delivers a punch to the gut, proving relevant in today’s turbulent times.

Set during a single day in 1927, “Ma Rainey’s Black Bottom” chronicles a recording session in Chicago between real-life blues singer Ma Rainey (Davis) and her band. The studio’s suffocating rooms amid the city’s heat feed the friction between the no-nonsense Ma, her hot-headed trumpeter Levee (Boseman) and the white managers eager to make more money for the record company. As Levee squares off with Ma and his own bandmates, the group’s personal traumas are laid bare, leading to an inevitable clash of wills as the characters reach their breaking point.

Under George C. Wolfe’s deft direction, “Ma Rainey’s Black Bottom” successfully meshes the feel of the stage with its cinematic ambitions. Long, unbroken takes allow the screenplay’s rapid-fire dialogue to flow uninterrupted, replicating the theater experience. Close-ups linger on the actors’ faces, allowing viewers to see the sweat pouring down Ma’s face and the tears welling up in Levee’s eyes.

The film is better staged than 2016’s acclaimed “Fences,” based on another of Wilson’s plays. As much as I liked “Fences,” the film’s minimalist locations made it more obvious that it was adapted from the stage. Though “Ma Rainey’s Black Bottom” is mostly set in the recording studio, the camera weaves effortlessly between outside locations and the stifling rooms inside. Tobias A. Schliessler’s rich cinematography embraces brown and earth tones, playing with shadows as tensions spill out into the daylight. At an hour and 34 minutes long, the drama is briskly paced, which suits its limited setting.

“Ma Rainey’s Black Bottom” traces the contrasting journeys of Levee and Ma, two big personalities at odds with those around them. Even though Davis’s character gets titular billing, make no mistake – this is Boseman’s movie. In his last role, the soulful “Black Panther” actor, who died from colon cancer this summer, delivers a raw and kinetic performance that caps off his too brief but formidable career.

After playing a ground-breaking superhero and several Black icons, Boseman goes for broke as the arrogant Levee, showing an intense range of emotion. He is both charming and obnoxious, likable and dangerous. In one heart-wrenching monologue, he describes the childhood trauma that shaped Levee’s vengeful outlook. And in another, he dives into the character’s fiery instability by questioning God’s allegiance to Black people. Both should put Boseman on the radar for best actor at the Academy Awards. His masterful turn underscores the tragedy of his death, hinting at even future greatness.

But the movie is called “Ma Rainey’s Black Bottom,” and the fierce Davis gives a transformational performance. The versatile actress – who won the best supporting actress Oscar for “Fences” – is staring down a nomination for best actress for another Wilson play. Donning heavy makeup, gold-capped teeth and body padding, Davis disappears into the shrewd songstress. Ma has fought for everything she has, and Davis never lets us forget it. When she calls for a Coca-Cola before singing or wants her stuttering nephew to record the intro to the title song, she refuses to back down, knowing she’s earned the right to make such demands.

Nearly 100 years after its period setting, “Ma Rainey’s Black Bottom” resonates amid the country’s ongoing racial tensions. The film looks at how white producers have exploited the talents of black performers. In a quiet moment, Ma acknowledges she’s the cash cow for her recording company. The street-smart singer knows how to play the game when her managers try to control her. Meanwhile, the ambitious Levee doesn’t, and his pride makes him vulnerable to the white producers’ manipulation. The consequences are heartbreaking as the film exposes the lack of respect and decency shown to Black artists.

In addition to Boseman and Davis, the supporting cast gives solid turns all around. In Ma’s band is Colman Domingo, who I know from “Fear the Walking Dead.” As the sensible Cutler, Domingo shines as a supportive friend to Ma and a foil to the reckless Levee. Glynn Turman gives a memorable turn as veteran band member Toledo, who earns sympathy after sharing his life experience with the group. The promising Taylour Page stands out in a few key scenes as Dussie Mae, Ma’s girlfriend who shares a flirtation with Levee.

The only flaw I found with “Ma Rainey’s Black Bottom” is there wasn’t as much interplay between Boseman and Davis as I expected. Though the two are set up as opposing forces, their interactions with one other are limited as the film follows their intersecting but separate journeys with their own tight-knit crews. Still, the scenes Boseman and Davis do share are magnetic, and it’s great to see the two actors play against each other.

Making its way from the stage to the screen, “Ma Rainey’s Black Bottom” is one of the year’s best films. Powered by its incredible acting, the one-two chops of Boseman and Davis should strum up consideration for the Oscars. Boseman’s poignant final performance is the best of his career, while Davis cements herself as a force to be reckoned with.

The film emerges as a timely reminder of the ongoing struggle for racial equality. As thought-provoking as it is entertaining, “Ma Rainey’s Black Bottom” asks us to evaluate how far we’ve come in terms of race relations – and how much more work we still need to do.