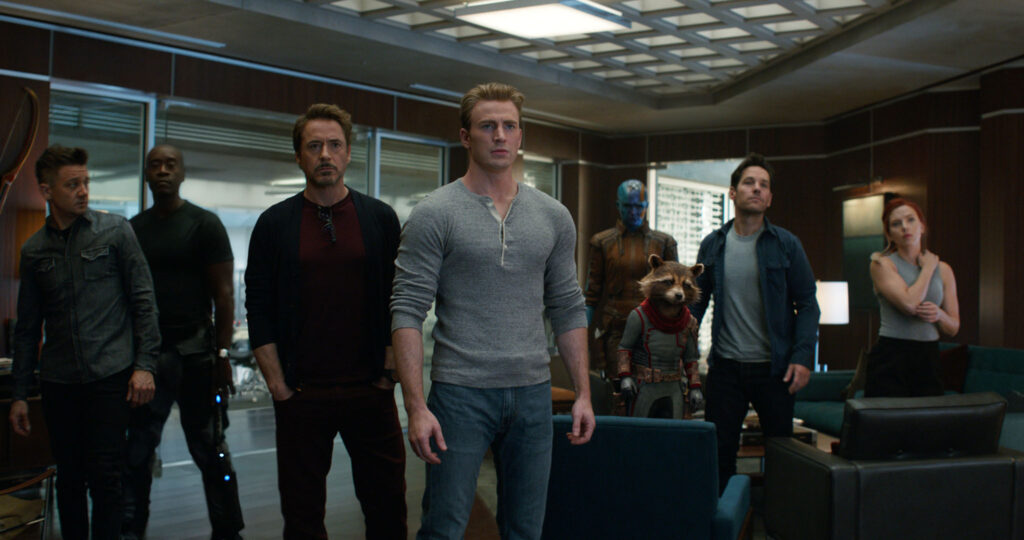 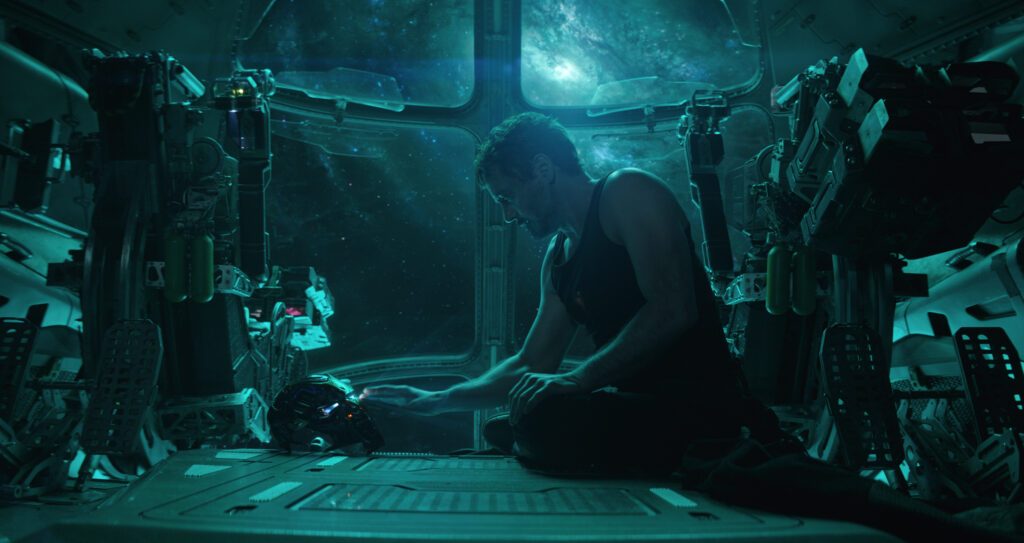 After building a sprawling franchise unlike anything before it, the Marvel Cinematic Universe wraps up 11 years of storytelling with its 22nd movie, “Avengers: Endgame.” As much spectacle as it is heart, the epic follow-up to last year’s masterpiece “Avengers: Infinity War” is a love letter to fans. It’s a funny and emotional journey that provides a satisfying conclusion for the beloved characters who have become ingrained in pop culture.

For the first time in the MCU, Earth’s mightiest heroes lost the fight. In “Infinity War,” Marvel’s superheroes were brought to their knees when the Mad Titan Thanos (Josh Brolin) snapped half of the universe out of existence, including turning many of their fellow Avengers to dust.

Left to put the pieces together are the six original Avengers, who are determined to undo the damage from the Decimation. Iron Man/Tony Stark (Robert Downey Jr.) is stranded in space, desperate to make it back to Earth. Captain America/Steve Rogers (Chris Evans), Black Widow/Natasha Romanoff (Scarlett Johansson) and Bruce Banner/Hulk (Mark Ruffalo) are looking at every available option. Thor, the God of Thunder (Chris Hemsworth) is struggling with the fact that he failed to stop Thanos one-on-one. Hawkeye/Clint Barton (Jeremy Renner) has embarked upon a dark path of revenge.

When the missing Ant-Man/Scott Lang (Paul Rudd) appears, the remaining Avengers have hope they can restore the universe to its proper order, including bringing back their fellow comrades. It’s a big risk for which they’re willing to put their own lives on the line.

“Avengers: Endgame” pulls on your heartstrings, with moments that will make you laugh, cheer and cry. The movie includes several callbacks to other MCU films and the return of some familiar faces, a reward for fans who have stuck with the franchise since 2008’s “Iron Man.” The final act, with its eye-popping climactic battle, packs an emotional punch that is only possible because of the extraordinary care given to the stories and characters over the last 22 films.

Under returning “Infinity War” directors Anthony and Joe Russo, the film covers a lot of ground, switching back and forth between a variety of locations on Earth and in space. At its three-hour runtime, “Endgame” never feels overstuffed, giving its storylines and characters enough room to breathe. But the film isn’t as tightly executed as “Infinity War.” “Endgame” is slow-paced in its first hour, as it reintroduces moviegoers to its characters and sets up their plan to defeat Thanos. But the film picks up the pace in its second and third acts.

For more than a decade, the MCU has introduced characters with whom audiences have fallen in love. “Avengers: Endgame” focuses on the OG Avengers and makes sure to give moviegoers plenty of time with them. For fans who liked the party scene in 2015’s “Avengers: Age of Ultron” where the Avengers attempt to see which of them is worthy enough to pick up Thor’s hammer, “Avengers: Endgame” loads up on the interactions between its characters.

All the remaining Avengers get their time to shine. The phenomenal Downey, the father of the MCU, continues to bring new layers to Tony Stark. Iron Man has evolved from a reckless playboy to a redemption-seeking hero who puts the greater good above his own self-interest. Evans has captured moviegoers’ hearts as Captain America transformed from an idealistic patriot into a world-wise vigilante fighting for civil freedoms. Evans knows how to balance Cap’s sense of duty with the inescapable feeling that he’s a man out of time. Apart from “Age of Ultron,” this is Renner’s best outing as Hawkeye as the film explores the loss driving the archer-turned-katana-wielding warrior known as Ronin.

But it’s Thor and Nebula (Karen Gillan) who are the film’s standouts. The excellent Hemsworth navigates a range of emotions as Thor drowns in his feelings of grief and failure. It’s a very human portrayal that makes the hammer-wielding god more relatable. As Thanos’ conflicted daughter, Nebula has grown from the hardened villain in 2014’s “Guardians of the Galaxy” to become one of the good guys. Throughout “Endgame,” Gillan reaches deep into the character to show the cyborg at her most human yet.

As “Endgame” showcases the OG Avengers, fans may feel let down by the lack of screen time given to the group’s newest member. After receiving her own solo film earlier this year, Captain Marvel/Carol Danvers (Brie Larson) barely appears in the movie. If Carol is to be the future face of the Avengers, Marvel needs to do a better job of developing the character in future movies.

“Avengers: Endgame” accomplishes the monumental task of tying together the sweeping Infinity Saga of the Marvel Cinematic Universe in a way that will please most fans. Moviegoers are witnessing the end of a very special era in cinema history. At the same time, the spectacle still provides a foundation for the cultural juggernaut to move forward. As we say goodbye to some characters, there are still more superheroes to follow as the franchise opens the door to new adventures. 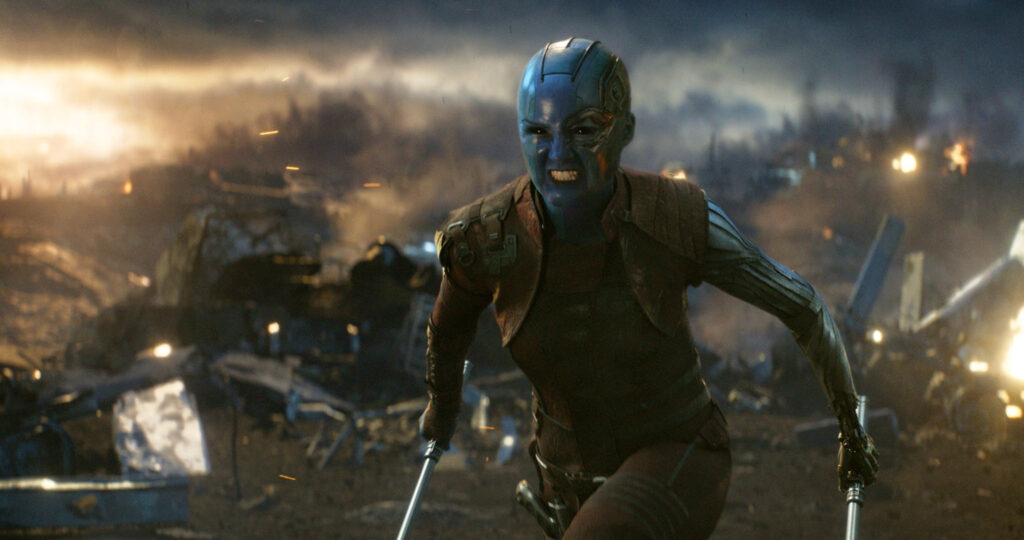 The Avengers have enjoyed a decade-long run in the winner’s circle. A problem pops up within the first 10 minutes of the movie or stand-alone adventure, a superhero solves and prepares for the sequel. The villainous Thanos had been lurking in the background most of the time, but his wrath was on full display in “Infinity War.” For the depleted heroes, losing half of the world’s population in a snap was the biggest defeat they ever suffered, and “Avengers: Endgame” is the long path back to save what Earth lost and dealing with the aftermath of not being heroic for once.

Directors Anthony and Joe Russo return with the same sense of doom and gloom with which “Infinity War” concluded after Thanos (Josh Brolin) completed his Infinity Stone gauntlet and divided Earth between the vanished and those left behind. Unlike the action-heavy outfit that began “Infinity War,” “Endgame” starts with the long form of failure the Marvel Cinematic Universe’s team has committed in stopping Thanos’ snap, the five-year search for redemption and the crazy idea of a “forgotten” hero that may just achieve what they seek.

That “forgotten” hero is Scott Lang, aka “Ant-Man” (Paul Rudd). To execute that plan, that means getting Iron Man (Robert Downey Jr.) and Captain America (Chris Evans) to work together again. The goal: Get back all those who turned into dust among the “not-dusted.” Black Widow/Natasha Romanoff (Scarlett Johansson), Bruce Banner/Hulk (Mark Ruffalo), Thor (Chris Hemsworth), War Machine/James Rhodes (Don Cheadle) and Rocket (Bradley Cooper) compose the core/reserve hybrid team.

If “Infinity War” is an NBA all-star game of Marvel movies, “Endgame” is the 1990s New York Knicks — strong defense of the Russo brothers’ MCU hits. “Captain America: The Winter Soldier,” perhaps the studio’s best of its 22 movies, is at the forefront of the hit parade, with throwbacks to the three “Thor” movies, “Guardians of the Galaxy” and even “Captain America: Civil War.” Any of the major stars who were left out of “Infinity War” are seen here, like the return of Hawkeye/Clint Barton (Jeremy Renner). While many in the crew, particularly Thor, carry heroic grief with them post-Thanos’ snap, Hawkeye and Ant-Man maintain it twice-fold on personal and global levels.

But topping them all is Nebula (Karen Gillan), Thanos’ daughter who joined the good guys. While Nebula’s arc had been told through the tug of war between her and her sister Gamora (Zoe Saldana) to be their father’s favorite, she is finally treated to a storyline where her own actions and growth matter.

“Endgame,” no matter its 181-minute runtime and the price of movie tickets these days, is critic proof. There is nothing that the Russo brothers could do with it that would make fans who have invested years into this franchise decide to step away from it. There is an attachment into what happens with these characters, so when some characters turned into dust in “Infinity War,’ there was grief among its audience. “Endgame” is no different on an emotional level, thanks to Christopher Markus and Stephen McFeely’s screenplay.

However, points should be deducted on the technical side. Execution-wise, “Endgame” mirrored its direct prequel, going as far as its final scene having the bad guys on the opposite side of the battlefield as in “Infinity War.” Plus, with Marvel shooting its films on the same Atlanta studio lot, the epic battles are starting to look the same. “Infinity War” was nominated for an Academy Award for visual effects, and “Endgame” feels like a copy-and-paste job from that.

“Endgame” is the fitting conclusion for the team that saved New York in 2012 but lost half the planet last year. If only it wasn’t as rubber-stamped and bloated.