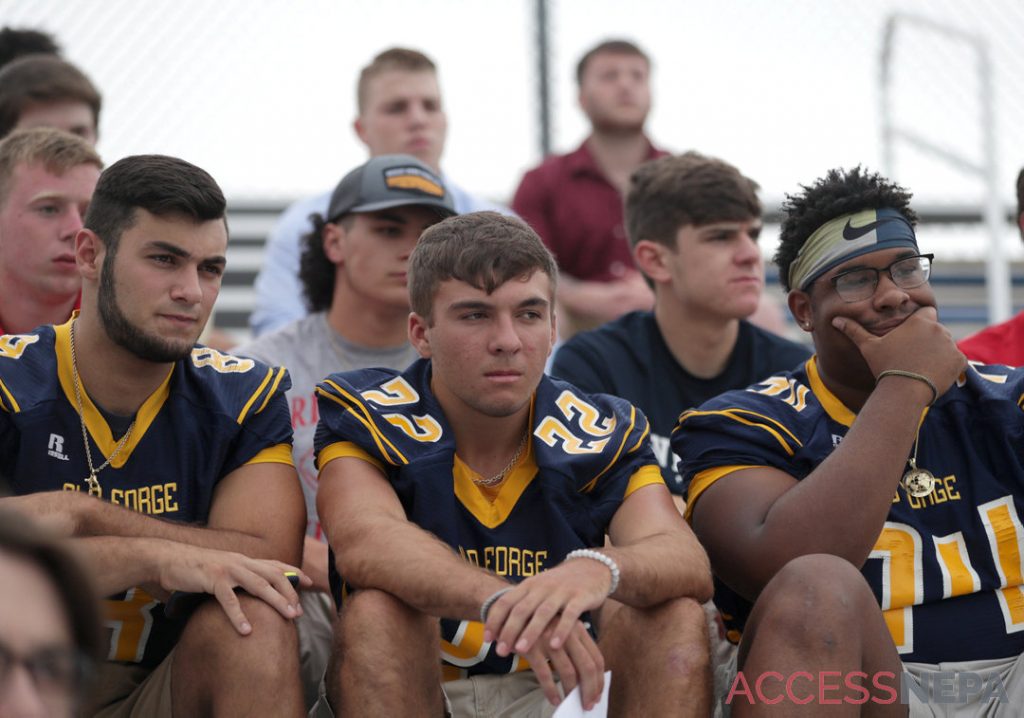 Players get one more chance to shine at Dream Game

BLAKELY — Players from the Lackawanna Football Conference gathered for the 87th Scranton Lions Club Dream Game Media Day, honored for the opportunity to represent their schools one final time as a high school athlete.

Some were overwhelmed by their selections.

Chris Wickenheiser, Will Stevens, Donovin Loomis and Cayden Merrifield missed the 2020 season, and they can’t wait for their opportunity to shine in the summer all-star classic that is scheduled for Wednesday, July 21, at 7 p.m. at John Henzes/Veterans Memorial Stadium.

“It is very exciting,” said Wickenheiser, who will continue his football career at Dickinson College. “The only down part is not having all of our seniors here. Every senior missed their season, so we wish we could all be together.

“At least we are getting something to play for and we are looking forward to it. It should be fun.”

Both Wickenheiser and Stevens, and teammate Julian Blanco, who could not attend Media Day, lost their senior years when the Abington Heights administration and school board chose not to sponsor contact sports in the fall because of the coronavirus pandemic. All three are members of the County all-star team, which seeks to make it two wins in a row in the series.

“I just know that Wick and I are so excited,” Stevens said. “I know if Julian was here, he would say the same thing. We are so excited for the opportunity to meet all of the guys on the team and to be able to put the helmet on one more time.”

Stevens, a two-way lineman, and Wickenheiser, a wide receiver and defensive end, combined for 42 tackles in 2019. Stevens had two interceptions and Wickenheiser had a fumble recovery.

Like the Comets seniors, Loomis did not have a senior year when Carbondale Area administrators and school board also did not field a team because of the pandemic.

He is excited about getting a chance to play again for the County all-star team, and also plans to take advantage of the time to get back into football shape as he is headed to Thaddeus Stevens College of Technology where he will play football.

“My main priority in the summer was going into the Navy and serving my country, but I ended up getting some opportunities to play in college and I am going to play at Thaddeus Stevens and the Navy will be my next step,” said Loomis, who is the only Charger in the game. “I just want to get out here and give 100% and prove my worth because I didn’t get a chance my senior year.”

At West Scranton, Merrifield, one of the top multi-sport athletes in the area, sat out his final football season because of a broken wrist he suffered in an automobile accident last August.

He was chosen to play for the City team.

In his football career, Merrifield, who also excelled in basketball where he scored 1,000 points in his career and baseball for the Invaders, threw for 1,281 yards and 16 touchdowns, and added 521 yards rushing with three touchdowns to be selected a second-team all-star as a junior. He finished his career with 1,631 yards and 18 touchdowns.

“This means a lot to me,” Merrifield said. “Unfortunately, I missed my senior year in football and sitting on the sideline and watching made it tough. When I got the call that I was in the game, I am really excited to be out there one more time.”

Two players on each roster informed coaches they could not play.

The County lost Honesdale lineman Sam Deron, who played in the Big 33 all-star game, and Old Forge running back and linebacker Colin Holzman.