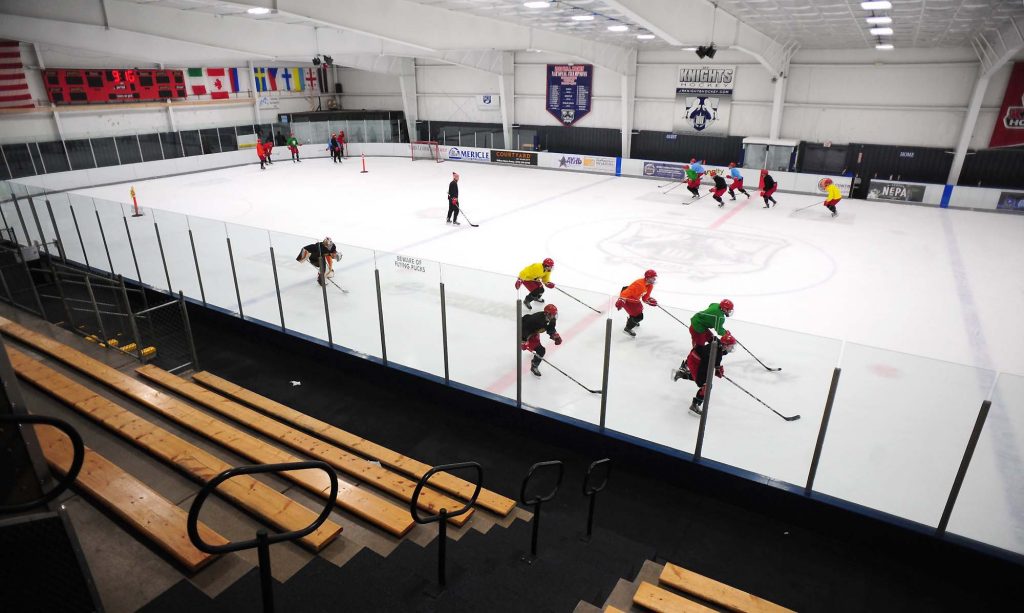 Revolution Ice Centre in Pittston is getting set to host college hockey teams from throughout the Atlantic region in March.

The facility, home to the King’s College men’s and women’s ice hockey programs, will host the 2020 American Collegiate Hockey Association Division 3 regional tournament March 7 and 8. Eight teams will compete over the two days for two coveted spots in the ACHA National Championship Tournament to be held March in Dallas, Texas.

“I’m excited to go (to Northeast Pennsylvania),” said Greg Leger, ACHA Men’s Division 3 Regional Coordinator. “I think it’s a well-known region for hockey. There are a lot of hockey schools in Pennsylvania, and it’s a really good central location to travel to.”

The ACHA is the United States governing body for non-varsity college hockey, meaning teams that compete under its jurisdiction are generally the club variety. However, there are plenty of major colleges and universities that have teams represented. Last year’s Division 3 national tournament featured the University of Kansas, University of Michigan and the University of Nebraska, among others.

The top two Atlantic region teams in the ACHA’s computerized ranking system earn an automatic bid to Dallas, and Nos. 3-10 will have to earn their spot by winning two games in the eight-team tournament.

Leger said the host venue is essentially responsible for the tournament, the idea being the facility will make money through ticket sales and fans purchasing items from the pro shop and concessions. Revolution had the necessary open ice time and wanted to host, which fit geographically since the ACHA was targeting somewhere in Pennsylvania or New Jersey.

The tournament will also benefit local hotels and businesses in the area with players, coaches and parents from eight teams traveling for the event.

“We traveled for regular tournaments, and we’d end up filling 40 hotel rooms just for my team alone,” said Leger, who used to coach at the University of Maryland. “And then you’re going out to eat and around the city.”

The final ranking that will determine which teams are competing is expected to be released near the end of February.

Although the teams aren’t recognized as varsity programs, Leger said he expects the quality of competition to be very good because that’s not indicative of the talent level of many players.

“The cool thing with club hockey is there are some really talented kids that choose club hockey over an NCAA team,” Leger said. “Maybe they’re choosing their school for academics, but it’s still a step beyond whatever they played in high school. There’s a lot of parity, especially compared to NCAA Division 3.

“A lot of youth teams, if they went and saw, they’d be pretty impressed. I think they would find it to be pretty fun and entertaining.”