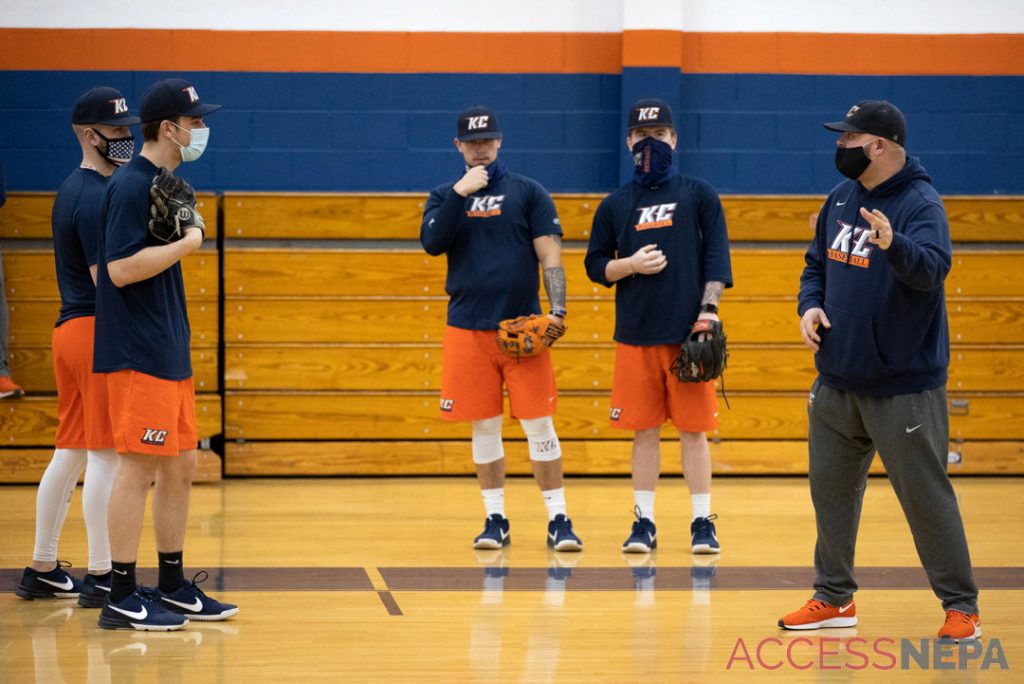 No less a source than the program’s esteemed head coach insists that the Keystone College baseball team’s recruiting class heading into this spring is its best in recent memory. Which is interesting, because neither Jamie Shevchik or the other coaches on his staff saw any of the players joining the program for 2021 play a game last summer.

Everything changed because of the pandemic, of course. In the sports world, though, few things have been altered as much as college baseball. Whether that’s good or bad sort of depends on how you look at it, really. Reality is, it may be a little bit of both for everybody.

But area coaches are entering hopeful restarts this spring with oversized rosters, new ways of teaching the game and ultimately, the understanding that where new rules open new opportunities, they also close others.

“This boom has benefitted me and Keystone from a talent standpoint,” Shevchik said. “The only thing about that is, I don’t have the heart to cut 20 kids who were in uniform last year and in the dugout.”

Scroll down Keystone’s 2021 baseball roster, and you’ll count a whopping 55 players. That’s about 15 more than the Giants normally would keep, and it’s not an anomaly. There are just as many on the University of Scranton’s, and even after a few names were trimmed off it in the last few days, Lackawanna College’s roster stands at a sturdy 47.

It’s not fair to call this unexpected, because there were murmurs early enough in 2020 that college baseball around here could look like this. But, the sheer scope of what transpired is still stunning. It’s difficult to remember a season when more players found their names on local college baseball rosters than this one, and several area coaches say it might stay this way for a while, for better or worse. 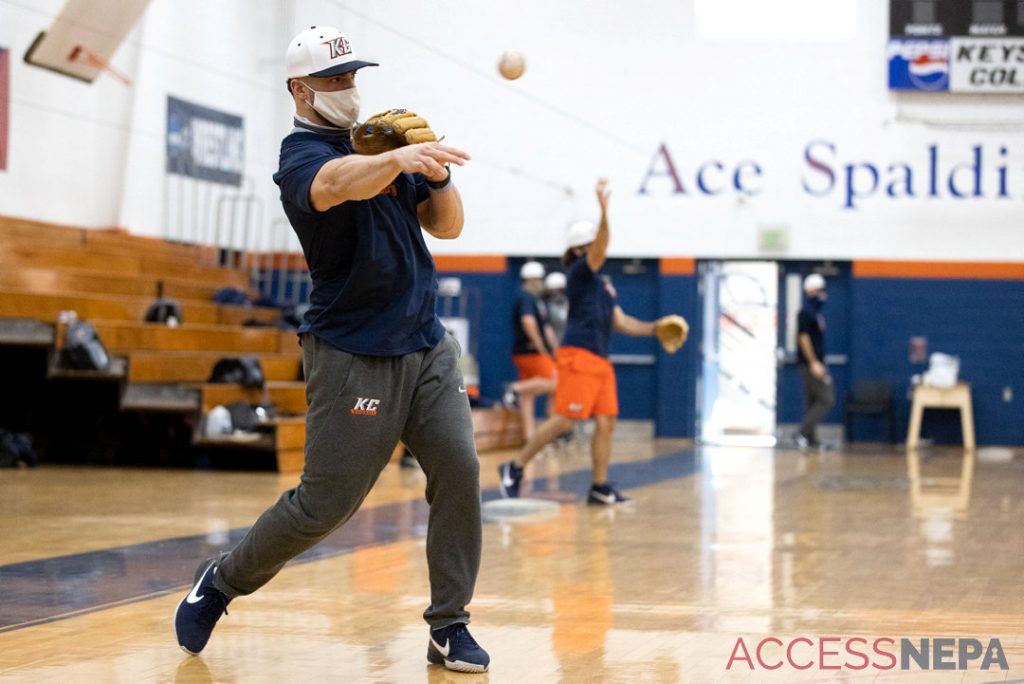 When the NCAA put the kibosh to spring sports seasons in the early days of the pandemic last March, it tried its best to make good with student-athletes who lost their seasons by offering them an extra season of eligibility. So, anyone who would have played their last seasons in 2020 had the option of delaying that to this spring.

It didn’t take a veteran baseball mind to put two-and-two together from there. Many would come back, but that wouldn’t slow the influx of incoming freshmen. Seniors could return, but at the expense of a younger teammate’s playing time, if not their own. Especially at the higher levels of collegiate competition, anyone who didn’t find the latter palatable could leave, but their exodus was going to trend both to the lower divisions and closer to their hometowns.

In short, everything was going to be different at Keystone, Scranton and Lackawanna, three programs at schools similar only really because of their proximity to one another.

Royals head coach Mike Bartoletti, for one, couldn’t think of a better time to do something he had been thinking about long before anybody knew COVID-19 even existed.

“In some years, when you have a lot of seniors taking a lot of the playing time, you need to see your freshmen compete.”

It’s easy to think a starting lineup of nine players, with just a handful of games per week, doesn’t exactly afford a ton of meaningful developmental time for a roster of more than 50, never mind playing time. The reason it’s easy to think that way is because it’s correct in that vacuum, if games are all that matter. Bartoletti said he plans to build a roster of between 28 and 35 players to compete in Scranton’s scheduled games. The rest of his players, he wants to deal with almost the way the New York Yankees did with the prospects who called PNC Field their alternate site during the minor league shutdown last summer. Develop them on the side. Let them help injured players on the frontline work their way back into shape. Allow pitchers to stay in shape with work against live hitting.

In that regard, there has never been more opportunities to develop players here, considering Scranton’s sparkling baseball facility is brand new, and a program like Bartoletti’s might actually need rosters this size to do that properly.

As sound as that plan seems, it doesn’t make as much sense a few blocks away on Vine Street.

Lackawanna College is a smaller school where most players go to play two seasons at the junior college level before moving on to bigger programs. It’s as much a showcase situation for many as a development opportunity. So, head coach Mike McCarry knows that, as good an idea as a JV squad of sorts might be at four-year institutions, it might not make strategic or financial sense at his.

Like at Keystone, McCarry said the quality of player Lackawanna added to its roster this year has improved, but the reality is, baseball is a game played by nine players at a time, and only 30 can travel for road games, anyway. Getting players — even really talented ones — on the field as much as they’d like to be is going to be “tricky.”

“I’ve probably got 20 guys who can be Division I scholarship guys,” McCarry said. “It’s going to be moving those 30 around, trip to trip, to make sure we’re getting guys enough experience.” 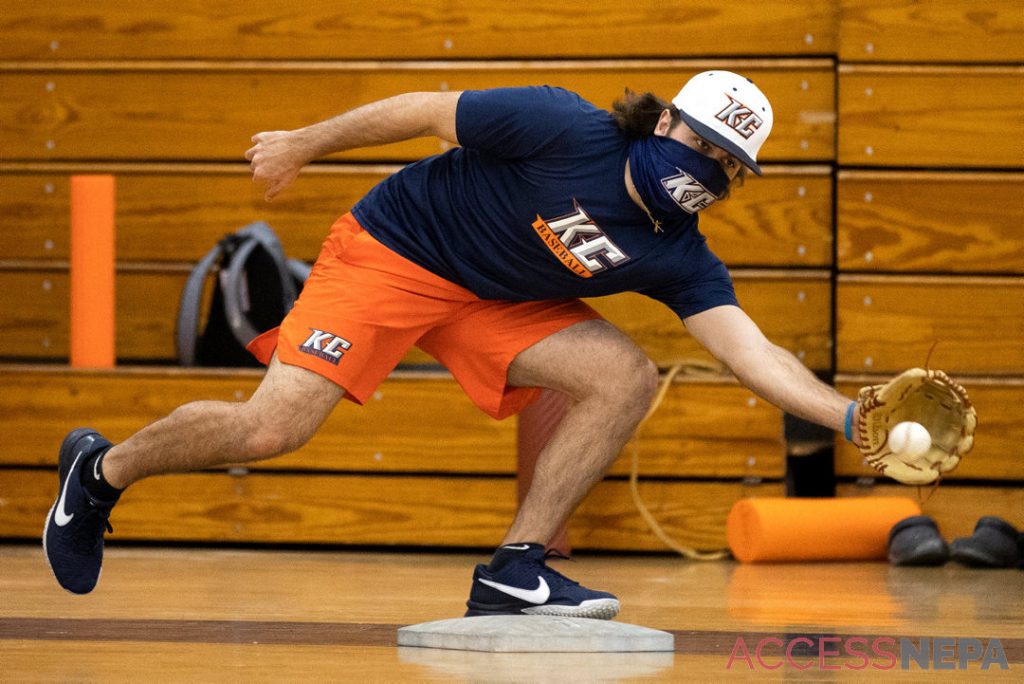 McCarry estimates it will take Lackawanna three years to process the changes and get into a normal rhythm again from a roster perspective. Shevchik thinks it might take Keystone an extra year or so beyond that. What they know for sure now is, it has made coaching more difficult, and educating students more of a challenge than ever before.

All three coaches said they added assistants to the staff to help contend with the roster overflows, but still, schedules are jammed to the brim.

Shevchik said Keystone had to open its budget a bit to secure practice time at some of the larger facilities around the area, which they have to use because time in their own gym in La Plume is tight, and practices have to be divided into groups to ensure proper social distancing. Plus, Lackawanna is vying for the same type of facility time, and soon, high school programs around the area will be, too.

On Wednesdays, the Giants have nine different practice sessions for players, starting at 9:15 a.m. in La Plume and ending at 11:30 p.m. at Baseball U PA in Scranton. They practice twice a week at Riverfront Sports Complex as well, and most days have a similar time frame.

“And that schedule has no academic meetings whatsoever,” Shevchik pointed out. “So now, we’ve also got to get these kids back in line and figure out how we can help them academically, so we don’t lose them. We don’t want to be the school that’s just going to be over-recruiting and bringing in 25 new guys every year just to fill out a massive roster.”

For sure, it’s not just going to be an interesting spring, but a fascinating future for all three of those programs. The door is opened for a better caliber of player, and a better brand of baseball, at the Division III and junior college levels.

But, at what cost?