But the Pine Grove resident, his father Kevin and the rest of the team will finally see the reward of that work over the next week.

“I’m finally excited to be going back to racing,” Chris, 30, said. “We’ve been staying busy making sure all of the cars are ready.”
Those cars — Chris’ No. 8C Chevrolet Nova, Kevin’s No. 66 Nova and a third Nova just put together — may show up Sunday at the Forestville oval, which will unlock its pit gates for a 12:30 p.m. practice.

Open to any car including a roll cage, the practice will go for 2½ hours before features are held for both the Blast from the Past vintage stocks and enduro cars.

Because of the ongoing restrictions forced by the coronavirus pandemic, the grandstands will be closed.

They will open Friday, June 12, when Big Diamond conducts its season opener. The 7:45 p.m. program features the 358 modifieds, open sportsmen and street stocks.

That show also includes the roadrunners, in which Chris Holland won his second title in the past four years in 2019.

Kevin said Chris’ participation in 2020 will be limited at the track’s mandate, an order given to other past champions in the roadrunner division.

“I think any track that’s going to keep cars away because they don’t want them to win a championship is ridiculous on the track’s part,” Kevin said. “Any cars should want to run against the best.”

He added both roadrunners will be weekly entrants in 2020, with the No. 8C containing different drivers. 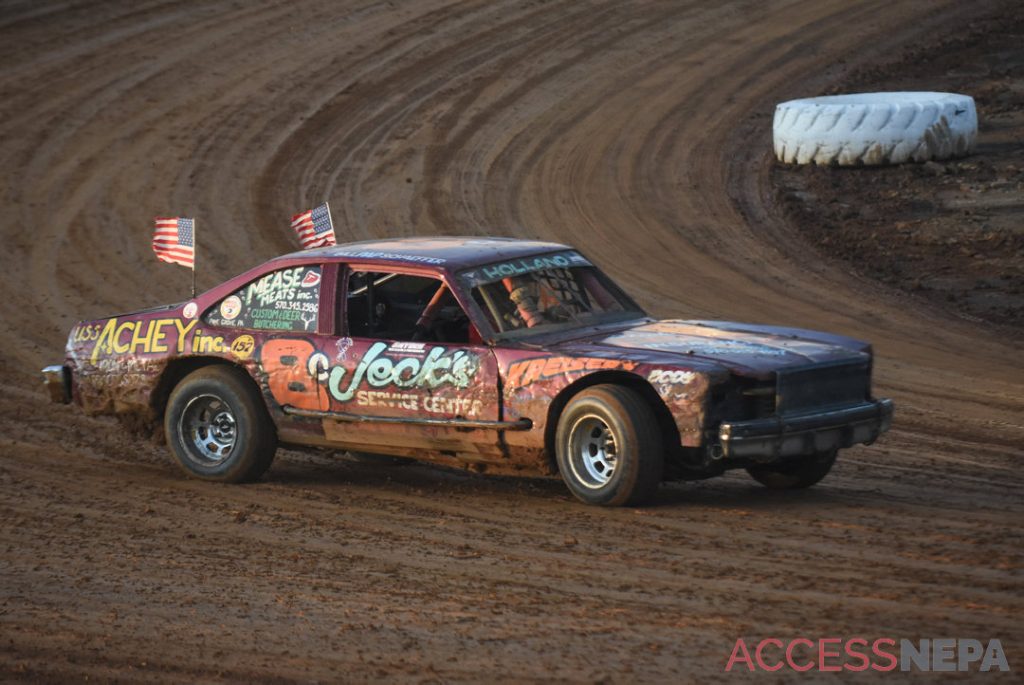 Chris will drive in the June 12 program with a specific goal in mind.

“I definitely want to win on opening day,.” he said, “because I’ve never won one. He (Kevin) has one on opening day. It’s one of the only things he has over me.”

Last year, Chris, the 2015 Big Diamond champion, surpassed Kevin, the 2006 titlist, in track championships with his second.
“I didn’t even think to run last year to win another points championship,” Chris said. “We ran last year and did better and better each week.”

Kevin said, “I was hoping so. You always want to see your kid do better than you. I learned a lot over the years racing and we put it into his cars. We’ve been in the class longer than anybody else.”

Kevin, 51, returned to full-time competition last season in a car that would usually be Chris’ back-up machine.

“I’ve been itching to get back in the seat a while and it was just finances (preventing it),” Kevin said. “If we have a second car there, I might as well drive it.”

Kevin, who won his first roadrunner race in the 2007 season for his opening day win, said the team has already tried its cars on a track.

Last week, the group went to BAPS Motor Speedway, Newberrytown. There, the team had to sign a waiver, absolving the track from any liability if anyone contracted COVID-19, and was encouraged to wear masks.

“Once we got into the pits, nobody was wearing (a mask),” Kevin said. “I can’t guess what it will be at Diamond.”

The Hollands, who assemble their own Chevrolet race engines, purchased another Nova during the offseason. It will be used as either a third roadrunner or as an enduro car to be driven by Chris’ mother Pam, Chris’ girlfriend Amber Weaver or crew members Craig Zelinsky or Chris Natale.

While that car may compete in Sunday’s enduro, Chris and Kevin are looking forward to June 12, when the roadrunners take the green flag before a grandstand that likely will be crowded.

“Usually, they start (the feature) straight up from your heat finish,” Kevin said. “If you can win the heat, you will probably start on the front row.

“I know they (the competition) are in trouble if we finish anywhere up in the front.”