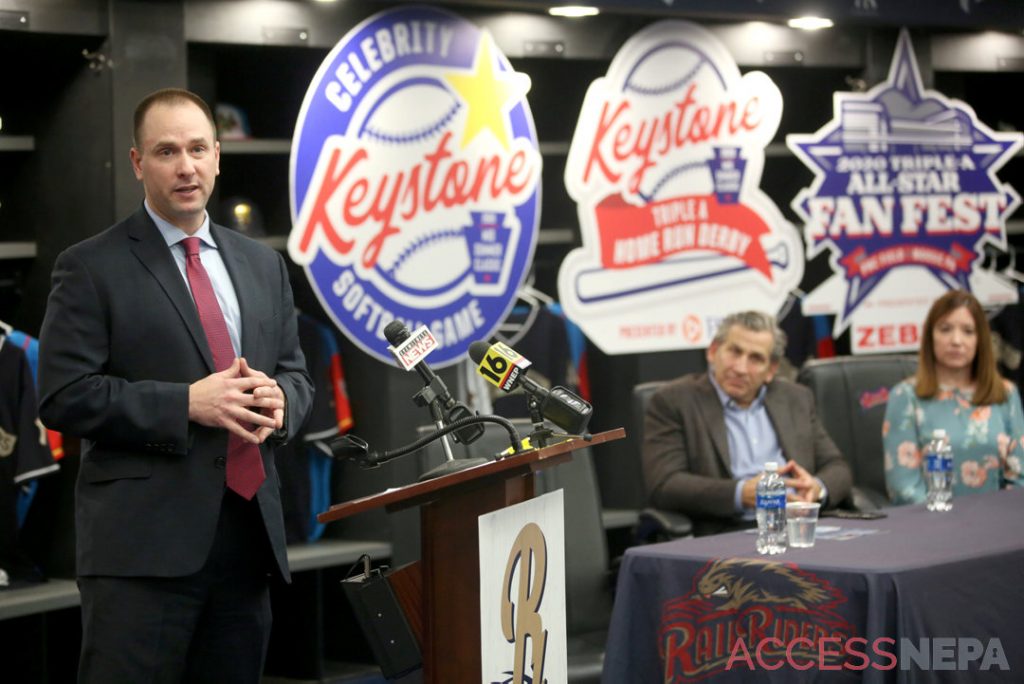 The RailRiders want something different, and John Adams has never been one for embracing the status quo.

Those were basically the main themes that came out of Wednesday evening’s press conference inside the home clubhouse at PNC Field, where the team introduced Adams as its new president.

Press conferences can be about themes, though. Reality presents an entirely different set of challenges. Here’s the RailRiders’ reality and the bottom line on what Adams will have to tackle as team president: As successful as this franchise has been on the field over an amazing span of about two decades now, it’s not making much headway in the areas where its ownership group judges ultimate success. At the gate, and in the shops.

The RailRiders did not crack the top 25 in total merchandise sales among minor league teams last season, and while attendance has been solid and consistent, co-managing owner David Abrams has been just as consistent in his belief that there’s room to grow the fan base.

Since the start of the 2013 season, Coca-Cola Park has hosted 4.154 million fans to watch IronPigs games; PNC Field has hosted 2.906 million for the RailRiders just an hour or so up the Northeast Extension.

Maybe, we’re talking about an unfair comparison. The Lehigh Valley metro area is just behind Philadelphia and Pittsburgh in the state, with The Lehigh Valley is the third most populous Metropolitan Statistical Area in the state of Pennsylvania with a little more than 840,000 total residents, according to a 2018 estimate from the U.S. Census Bureau. The Wyoming Valley has about 558,000, and the Pocono, if you want to throw them in, is about 340,000. It’s a much bigger area to cater to, for a relatively similar amount of potential customers.

Plus, nobody in the International League has really competed with Lehigh Valley over the long-term in the important financial areas. The IronPigs are a ticket-selling machine and a branding behemoth. Arguably, the Pigs have the most popular brand in all of minor-league baseball, and it shows when it comes to measure merchandise sales. Last year, the Pigs won the Larry MacPhail Award, given annually to the top promotional team in minor league baseball.

Fair or not to compare, this is the stratosphere Abrams and the local ownership group would like to live closer to someday. Which is where Adams comes in, and in many ways, he’s the type of executive no other franchise at the Triple-A level has in its corner.

“They want to see that ballpark filled every single night,” Adams said of RailRiders ownership. “And that’s the task I’m challenged with.”

Being around the International League for nearly two decades, it’s difficult to think of an executive quite like Adams.

Typically, you see two different types of people running the show: Minor-league lifers who practically grew up with the franchise and learned the business from the predecessors (guys like Jeremy Ruby, who started with the Red Barons as a ball boy before eventually succeeding the late Bill Terlecky and Rick Muntean as president and general manager) and young, up-and-comers who strove to work in baseball, have big goals and big ideas, but maybe neither the ties to the organization or the experience in the game.

Sure, Adams’ roots are in minor league baseball. He served as the promotions guru with the Trenton Thunder, and he also had a short stint as assistant general manager of the Lancaster Barnstormers. But the bulk of his work came with the Philadelphia Soul in the Arena Football League, where he helped start several franchises after the league’s 2011 reboot. He was team president of arguably the league’s most successful franchise, and he was so dedicated to building the sport, he wound up taking over as president of the entire league in 2018.

“It was a rude awakening when we came back. We had certain expectations of how many season-ticket holders we were going to get back from the people who were with us before, expectations of what the support was going to be. And, that first season was tough. I think it is about creating reasons for people to come. I like to say, in Philadelphia during the second go-round, we had to pick people up and put them into the stadium, because we got lost in Philadelphia. When you’re there with the Sixers and Flyers and Phillies, and then you get the Union and the Wings and the (Camden) RiverSharks…it’s, how do we get people to pay attention to the Soul?”

It has been awhile, for sure. But the Arena Football League was one of the most successful professional sports leagues in the nation. It had its own national television contract. It had its own minor league, the af2 (Remember the Wilkes-Barre/Scranton Pioneers?). The Soul averaged nearly 16,000 fans per game from 2004 through 2008, but after that 2008 season, the AFL disbanded for two seasons before a group, which included Adams, restarted it from the ground up.

What was the difference? Adams said what you’d expect him to say. Relentless effort. Not taking fans and business partners for granted. The unending pursuit of finding new reasons to intrigue people into checking out what others already are.

Bottom line is, he knows what works, and he has seen what hasn’t, and that’s something the RailRiders don’t believe they’ve had in the executive offices in recent years.

“Look, the Arena Football League didn’t fail because he didn’t do a good job, or the other owners didn’t do a good job,” Abrams said. “That’s not a perfect analogy, but there are lots of business — retail, for instance — where the world has changed. They had an asset that couldn’t adapt. Minor League Baseball is a little bit different, but we do have to adapt. Having someone who has gone through a difficult time running a sports business and knowing what needs to be done to turn things around will, hopefully, help us.”

Another thing about introductory press conferences: They’re about themes, generally to the point where they lack specific details.

Asked what he has specifically seen with the way the RailRiders are run that could be changed or tweaked, or what he did in Philadelphia that could be implemented in Moosic that could lead to immediate change, Adams provided few details. Time will tell, he said. And, that’s true. It will be important to follow how he works with new general manager Katie Beekman — hired in September after Josh Olerud’s resignation and put in a tandem with the new president that is rather unprecedented for the franchise — to both forge a new way of doing things and pave a path to success.

But, Adams did point out that he doesn’t plan to look at things from a traditional perspective. He’s into some of the “data-driven marketing” in the sports business world that is still fairly new and rather unutilized in the mainstream. He says there is effective and inexpensive technology available that helps teams measure who exactly a team’s fan is, where they’re coming from, when they’re visiting the park, where they’re sitting, their insights and demographics and what sort of merchandise they tend to purchase.

“If you are saying, ‘What’s one thing you’re bringing here that doesn’t exist right now?’ It’s implementing those thought processes and platforms we’ll need to help us make those good decisions over the next couple years,” Adams said.

There’s a lot for the tag-team of Adams and Beekman to do, moving forward. And, there’s high expectations from an ownership group that has shown a willingness to make changes when they don’t feel their own urgency is being met. Adams insists he’s not just ready to embrace that, but that he took the job to embrace it.

They want more butts in the seats, more young people flooding the park, to be a national player in the merchandise game, to create their own media content they can monetize and broadly market. That’s a lot, and they have to be patient with the process. But Adams knows that, as well.

Thing is, he may have a more complete understanding of that process than anybody in the International League.

“Generally speaking, we want to grow attendance every single year significantly over the next couple years,” he said. “It’s a process, and eventually, it will happen. It’s a process of making a lot of good decisions consecutively and letting them build off each other.”

And now, the future begins.