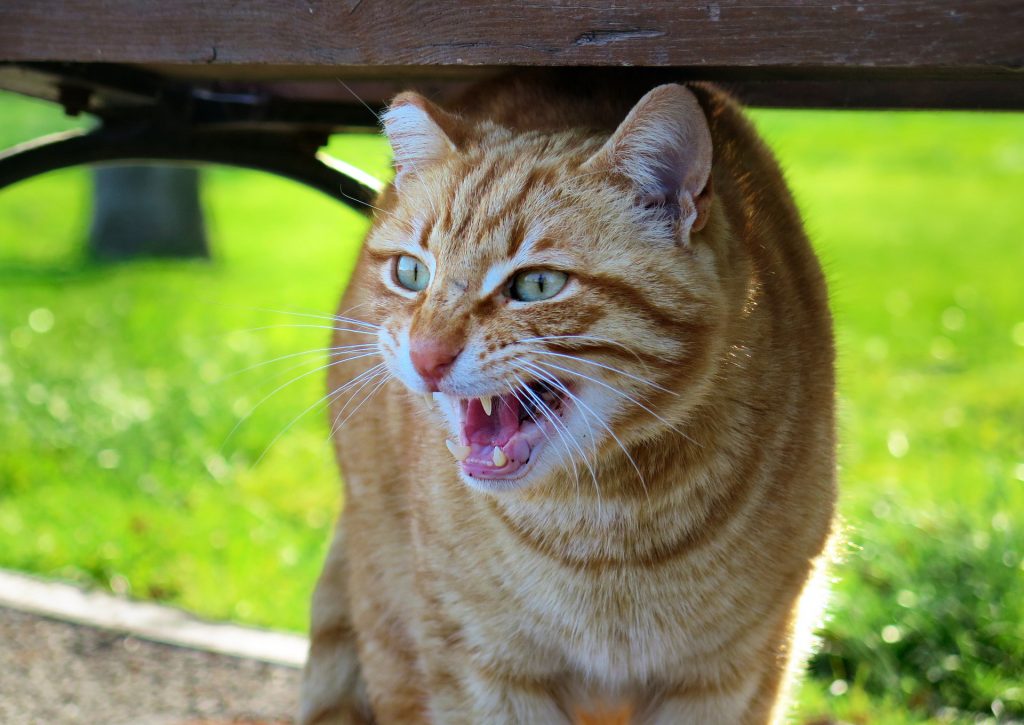 A guide to dog and cat body language

Can cats and dogs ever be friends? Some can, while others will fight like — well, like cats and dogs. Why the inconsistency? The problem may be that the two species don’t always speak the same language.

Cats and dogs communicate, with us and with each other, through body language. When using body language to interpret what our pets are saying, it is important to consider both the context and the pet’s individual personality. While certain physical cues commonly appear in both cats and dogs, those cues don’t always mean the same things, and it’s important to know the differences in order to better understand your cat or dog.
Your cat is saying one thing, but your dog is saying something else.

Here are a few examples of behaviors that may communicate dramatically different things for each species:

Tail held high: When a cat holds her tail high, it can signal that she is friendly and relaxed. The higher the cat’s tail, the more confident she may be. However, if her tail is raised high with the fur erect and puffed out, it usually indicates alarm or potential aggression. As she becomes more unsure or fearful, her tail is more likely to slink lower.

When Mink became increasingly ill, I could immediately tell something was drastically wrong by his tail carriage. He always carried his gorgeous, fluffy tail raised and draped over his left hip. As he became more ill, his tail was dropped and no longer folded.

When a dog holds his tail high, on the other hand, it often signals high arousal and the possibility of aggressive behavior. A dog that is agitated and about to aggress may also flick his tail back and forth vigorously. A dog is more likely to carry his tail in a neutral position, extended out behind him, when he is relaxed.

A Cairn Terrier’s tail is typically straight up. This was a desired trait of the breed so that they could be pulled from holes when going to ground to hunt vermin. Yes, this erect tail acts as a handle!

Wagging tail: Friendly dogs wag their tail loosely back and forth at medium height. When a cat’s tail begins to wag back and forth, an unfriendly encounter or predatory attack is likely to occur.

Rue’s fuzzy tail curls over his back, and it is always in a slow wag. He is one happy boy!

Closed mouth: Relaxed cats have closed mouths; relaxed dogs may have a closed or partially open mouth. The more tense a dog is, the more tightly closed his mouth becomes, although a very stressed dog may pant heavily or yawn.

Ears up for greeting: A cat who is confident greeting people will normally hold her ears forward and alert. If her ears move backward or twitch, it may indicate uncertainty or that the encounter is not going well. By contrast, one sign of a friendly dog is that his ears move back just slightly. A submissive dog will move his ears back even further as a submissive gesture. Dogs with erectly pricked ears may be ready to stand their ground against another animal if necessary — but this behavior is specific to the individual dog.

Turning to the side: Both dogs and cats turn their bodies to the side when attempting to shut off a potential threat. A dog may do this in order to show that he means no harm, while a cat may be trying to appear larger and more threatening to her opponent.

Lying belly up: A dog is likely to lie on his back as a submissive greeting behavior or as a way to get his belly rubbed by someone he’s close to. A cat, on the other hand, will lie on her back in self-defense; this position allows her to have all four paws, with claws drawn, ready to react to any threat. A cat will sometimes lie on her back for people she’s close to, but very few cats actually enjoy having their belly rubbed and may respond aggressively.

Sometimes your cat and dog are speaking the same language.

Your cat and dog may not always be on the same page, but they do share some behaviors. Here are a few that they have in common:

Ears upright: Cats and dogs both communicate through their ears. When they are relaxed, their ears usually point forward. When they are really excited or interested in something, their ears are likely to move all the way forward and upright. When the ears move backward and are flattened against the head, there’s often underlying fear or submission.

Raised hackles: When cats and dogs are feeling frightened or overstimulated, the hair on their back and tails fluffs out and stands on end. In both dogs and cats, hair standing on end indicates an animal ready to react.

Pupil dilation and blinking: A cat’s pupils dilate when she is afraid or is getting ready to attack. Similarly, a dog’s pupils will dilate when he is fearful or aggressive. Dilated pupils can also indicate high arousal in both species. Eye blinks in dogs and cats indicate the desire for a peaceful greeting, while direct eye contact, without blinking or looking away, can signal a challenge in both dogs and cats.

On “My Cat From Hell”, Jackson Galaxy will often do the slow blink to a cat he is working with to initiate trust with that animal.

Compacted body: When a dog or cat is afraid of something, he will make his body appear as small as possible, usually with the head held low. Similarly, both dogs and cats curl their tails underneath their bodies to indicate extreme fear.

When I take my cats to the vet they are squished as far back in the crate as possible. When placed on the table, they must remove the crate or my cats will struggle to return to that safe haven. My cats are never aggressive, but their reaction to fear is to flee.

Whiskers stiffened: Dogs and cats both have a normal height and structure to their whiskers. When they are stimulated by something and are about to react, their whiskers are more likely to stiffen and extend outward.

Panting: Panting can indicate various things in dogs, but in both species it can mean that the animal is highly stressed or frightened. Panting in a cat that is not interacting with another animal or in a fearful situation may indicate a serious health condition, and a veterinarian should be contacted immediately.

Yawning: While yawning in dogs can indicate stress, both dogs and cats may yawn as a calming behavior in conflict situations.

My dogs and cats co-exist peacefully. But as with any multi-pet household, I am careful to control and monitor their interactions to avoid possible conflicts and maintain harmony.

As with humans, all animals are not alike. Learning to understand your pet’s body language and how to effectively communicate with them will result in a strong bond and a happy secure relationship.

If you have an upcoming event or a topic I can write about, please contact me. I am always seeking stories to share with my animal-loving readers!