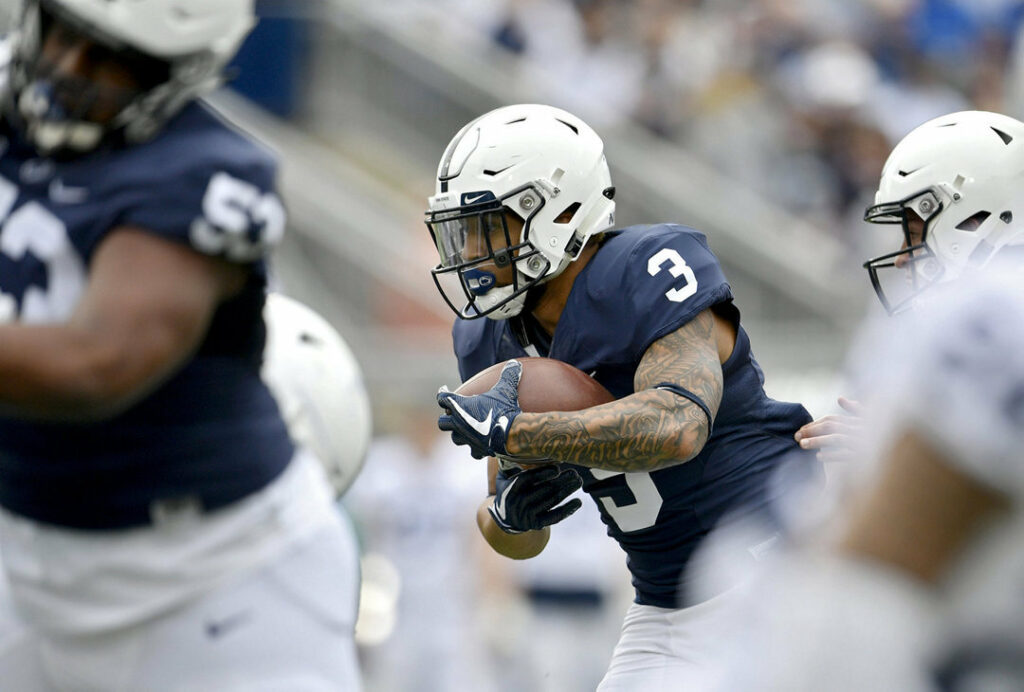 Sophomore Ricky Slade will be looking for running room this fall, much as he did in the Blue-White Game in April. He doesn’t promise to be the only one with the privilege, though. ABBY DREY / CENTRE DAILY TIMES VIA ASSOCIATED PRESS

Today we continue with the running backs. 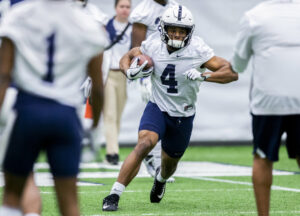 Penn State running back Journey Brown runs a drill during the first day of spring practice in March. JOE HERMITT/ THE PATRIOT-NEWS VIA ASSOCIATED PRESS

This shouldn’t be difficult, because there aren’t many names you could possibly know.

Penn State has just five running backs listed on its roster — for the sake of comparison, Michigan has a whopping 14; Ohio State has nine — but for as small a group as it is numbers-wise, it’s filled with talent. Sophomore Ricky Slade flashed both brilliance and inconsistency as a true freshman last season, and his fumbling issues probably cost him even more playing time than he wound up getting. But, he was the top running back recruit in the nation in the 2018 recruiting class according to some services, and he brings a rare combination of compact size and elite speed to the position.

Speaking of elite speed, there may not be a faster running back in the Big Ten than Journey Brown. Coaches have raved not just about that ability to break the game open on any run — he was one of the best sprinters in the state during his high school track days — but they say he has finally been able to pick up the smaller intricacies of the offense.

“I’m really impressed with the way Journey came along,” running backs coach Ja’Juan Seider said. “You saw him take that next step of being a really good football player.

“It’s confidence, not relying on everybody else to teach him the offense and kind of buckling down and watching film. It’s what you like to see out of a sophomore.”

The running back who has been in the program longest is actually Lake-Lehman grad Nick Eury, a bruising walk-on who has one career carry.

An argument can be made that the best running back who saw action in the Blue-White Game in April was Noah Cain.

The true freshman who had just enrolled in January finished with 12 carries for 45 yards to go along with two catches. He found the end zone twice, once on a rush and once with a catch, and that’s significant because the running back corps is so young, it actually makes Cain as solid a choice as their is if playing time comes down to who has caught the ball better.

Cain looked big and fast, and if he can protect the passer, he’ll become a legitimate option to compete for the starting job.

There will be some who can argue, similarly, that Cain isn’t the most gifted of Penn State’s freshmen running backs. Devyn Ford is a smaller speedster who is versatile in the passing game and can be a good compliment to Cain.

This is the rare case where you can legitimately see every player at a certain position on a big-time college football team actually see playing time this year. But while Seider has pushed the thought of going with a committee approach to the position this year for the first time, it stands to reason that Slade — a major prospect who has easily the most experience of the current group — will open the season as the starter and keep the job as long as he’s doing it well. But there is a role for Brown and Cain, and don’t bet against Ford forcing his way onto the field in a defined role as the season progresses as well.