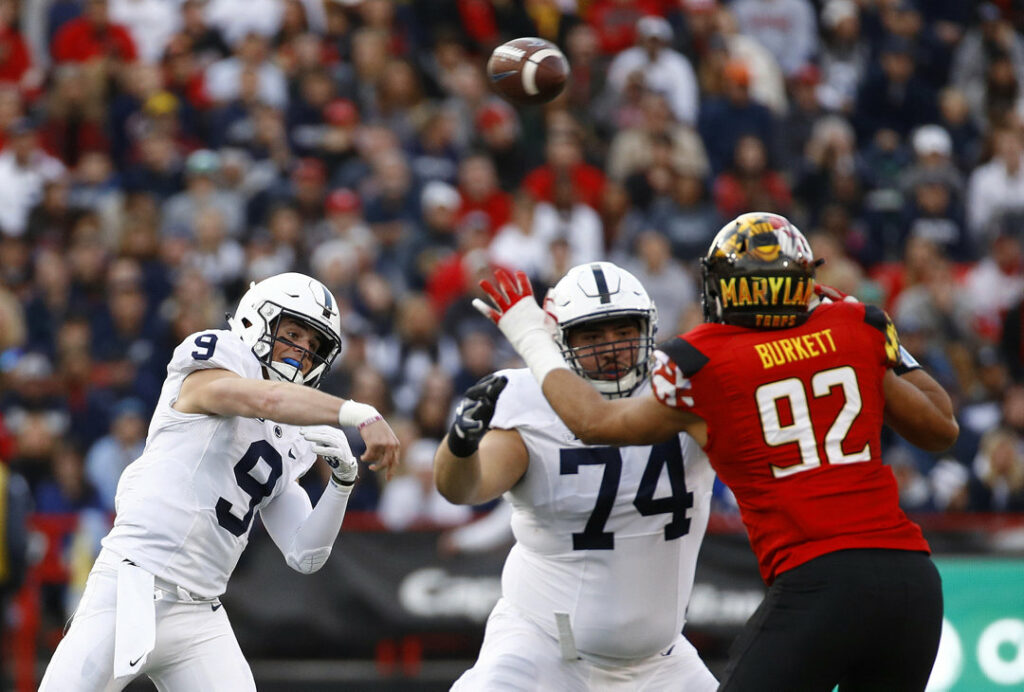 Guard Steven Gonzalez had a chance to give the NFL a try, but he returned for his senior season, giving Penn State plenty of experience on the inside of the offensive line. ASSOCIATED PRESS PHOTO

Today we continue with the interior offensive linemen.

*Appeared in nine games as a defensive tackle, four as a guard

On paper, Penn State should have been primed for an experienced offensive line in 2019. And, considering that paper was crumpled up and thrown aside in the hours after the loss to Kentucky in the Citrus Bowl on January 1, it’s not as if the NIttany Lions will be throwing the interior three positions on the line to a completely green group. 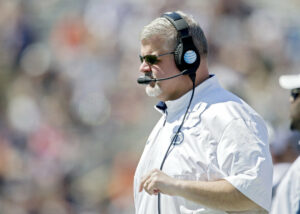 Penn State offensive line coach Matt Limegrover’s focus on development will be put to the test this season as the Nittany Lions look to some younger guards. (Abby Drey/Centre Daily Times via AP)

Center Michal Menet, arguably, was Penn State’s best offensive lineman last year. As a sophomore, and in his first season as a starter, he showed why he was once the top high school prospect in Pennsylvania, establishing himself not just as one of the best combination of pass-and-run-blocking centers in the Big Ten, but as one of the leaders of the entire offense.

Former Lake-Lehman standout Connor McGovern entered the NFL Draft a year early and was drafted by the Dallas Cowbows, and Steven Gonzalez admitted he thought about joining McGovern in the Draft. Instead, he returned for his fifth season with the Nittany Lions and has drawn rave reviews from the coaching staff a season after earning all-conference honorable mention honors.

“He had a decision to make at the end of last year,and I think he made the right decision and came back,” head coach James Franklin said of Gonzalez, who started every game at left guard last season. “I’m really excited about his experience and development, excited about what he’s going to do in camp from a leadership perspective. I think he’s going to have a big year for us as well.”

Penn State still has to replace McGovern at right guard, but there are two solid options to step in. Sophomore C.J. Thorpe is perhaps the favorite to claim the spot, a season after the coaching staff moved him to the defensive line out of necessity. He plays with a nasty streak and was once one of the best guard prospects in the nation in his own right. The staff also raves about the steadiness and versatility of Mike Miranda, who started a game at right guard last season when McGovern moved to center, filling in for an injured Menet on Nov. 24 against Maryland.

Versatile Hunter Kelly, who doubles as a backup defensive lineman, earned a scholarship in the spring and will make a push for the backup job at center, although he’ll have to fight off highly regarded redshirt freshman Juice Scruggs for that job. Another redshirt freshman who made surprising strides last season was Bryce Effner, a three-star guard who excelled in the weight room and climbed the depth chart quickly. He’ll be in the second-string mix this year, too. Redshirt freshman Kaleb Konigus, picking up the Lake-Lehman legacy from McGovern, started for the White team in the Blue-White Game in April and looked solid, making him an intriguing option because of his strength and consistency.

The NIttany Lions added one new recruit in the 2019 class who can force his way into the rotation this season.

Sal Wormley has the size (6-foot-3, 319 pounds) to look the part, but he has the toughness and technique to play it, especially in the running game. As a New Jersey prep product, he was one of the most productive interior linemen in the East, and it wouldn’t be out of the question to see the Nittany Lions squeeze him into a handful of games before they determine whether to burn his redshirt.

Hanover Area product Justin Kopko received an offer to walk on with the Nittany Lions this summer and will give the Wyoming Valley Conference a second player fighting for a spot on the depth chart, along with Konigus.

Essentially, the interior offensive line will come down to some consistent combination of Gonzalez, Menet, Thorpe, Effner, Scruggs and Miranda. That’s not a lot of experience at the backup spots, but it’s solid depth for a team that is going to have to rely on the development of players it has liked for a while.With Gonzalez gone next year and Menet a potential Draft entrant himself, it will be interesting to see whether offensive line coach Matt Limegrover works in some of the younger prospects more often than he otherwise would have.