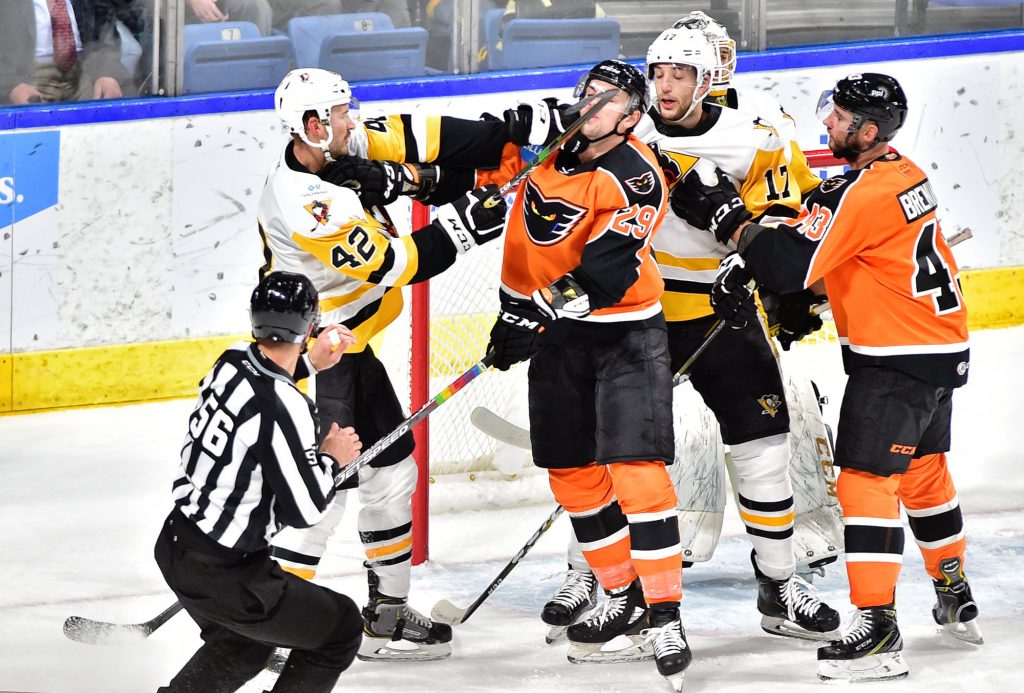 Trades happen all the time in hockey, but that didn’t make things any less surprising for Graham Knott last week.

The forward was on the road in Jacksonville with the ECHL’s Indy Fuel when he received the news he was coming to the Pittsburgh organization as part of the Joseph Cramarossa deal.

“I was getting ready for a game, and I didn’t know what to do,” said Knott, a second-round draft pick of the Chicago Blackhawks in 2015. “My mind was kind of going all different places. It’s good; fresh start and, hopefully, I can help the team.”

Knott was on the ice for practice with his new Wilkes-Barre/Scranton teammates on Tuesday at the Toyota SportsPlex, as the Penguins prepared for tonight’s clash against the Lehigh Valley Phantoms. For the Etobicoke, Ontatrio native, this new opportunity is a second chance to establish himself in the American Hockey League.

Knott played in 126 games with the Rockford IceHogs from 2017-19, recording 22 points (8G-14A). However, he was reassigned to Indy in late September and had spent the entire season there prior to the trade.

Penguins head coach Mike Vellucci said in a radio interview last week he wanted to see Knott show a higher compete level in order to stick in the AHL. Tuesday, he spoke about the forward’s potential.

“He skates really well, has great hands,” Vellucci said. “We just need him to compete hard like our team does, but I think our team will drag him into that compete because we practice hard. From the beginning of the year to now, we’re a different team.”

It should also help that Knott is familiar with some of the faces around the dressing room. He played with Andreas Martinsen in Rockford, and he and Andrew Agozzino shared the same billets while playing in major juniors.

Knott describes himself as a power forward that likes to play the body, a heavy style of game that has been one of Vellucci’s focal points.

Acquiring Knott also helps the Penguins from a personnel standpoint, as he would not count toward the team’s veteran limit while in the lineup and gives them greater depth if an injury should occur.

For now, he’s eager to show he can contribute to an organization as decorated as Pittsburgh’s.

“It’s huge (being back in the league),” Knott said. “I think I have the skill. It’s just bringing it every night, being consistent day in, day out in practice and games. (Vellucci) likes the boys to work hard, and that’s something I’ve got to do.”

While Ben Sexton was back in a red non-contact jersey Tuesday, the rest of the news on the injury front was positive.

Defenseman Niclas Almari and forward Jamie Devane are both cleared to return, Vellucci said, and they are expected to be in the lineup for tonight’s game at Mohegan Sun Arena.

Devane, a former third-round pick, suffered an injury in training camp and hasn’t skated in a game this season. Almari’s last appearance was Nov. 6 in Allentown against the Phantoms.