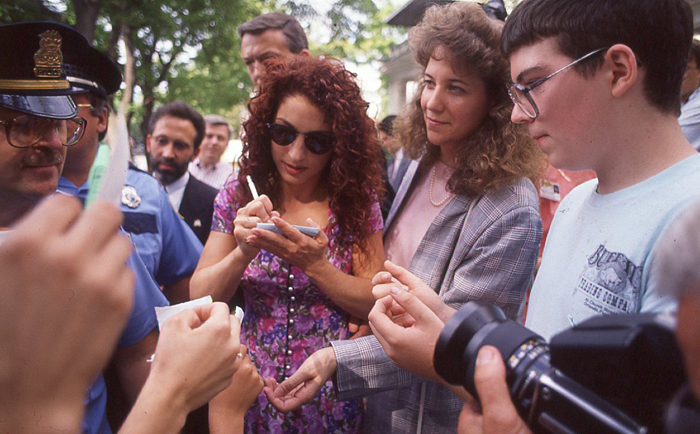 While traveling along Interstate 380 in Coolbaugh Twp., Monroe County, a tour bus became sandwiched between two tractor-trailers.
On the bus were singer Gloria Estefan, her husband Emilio and the couple’s son, Nayib, plus Barbara Arencibia and Lori Rooney. The Estefans — who had been in Washington, D.C., the day before to meet with President George H.W. Bush to talk about the singer’s anti-drug work — were traveling from New York City to Syracuse for a performance that night. Pennsylvania State Police reported that a tractor-trailer hit the rear of the tour bus, and the force of the collision drove the bus into the tractor-trailer in front of it. 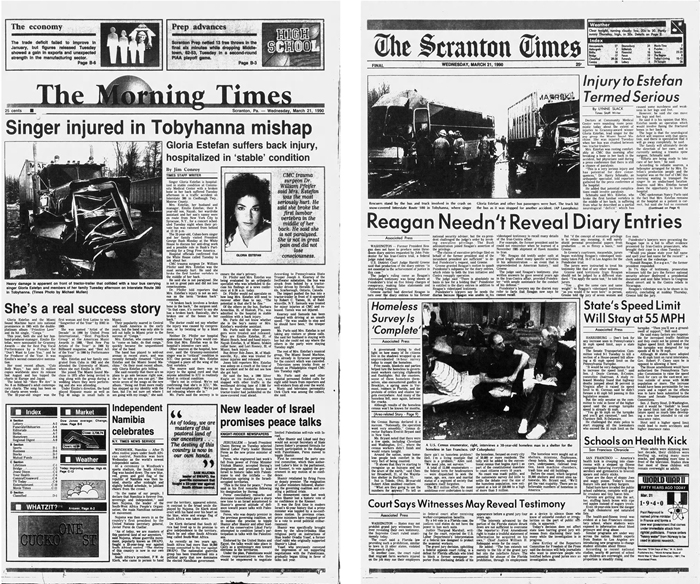 While the bus passengers suffered injuries, Gloria Estefan was hurt the most and ended up at Community Medical Center in Scranton, where trauma surgeon Dr. William Pfeifer reported that she had a break in her first lumbar vertebra.
As news of the crash spread, the hospital’s switchboard lit up with people calling about the singer. A CMC spokesperson confirmed that President Bush and music and television personality Dick Clark were just a few of the numerous calls that came into the hospital. The spokesperson said the hospital personnel fielded calls for eight hours straight. 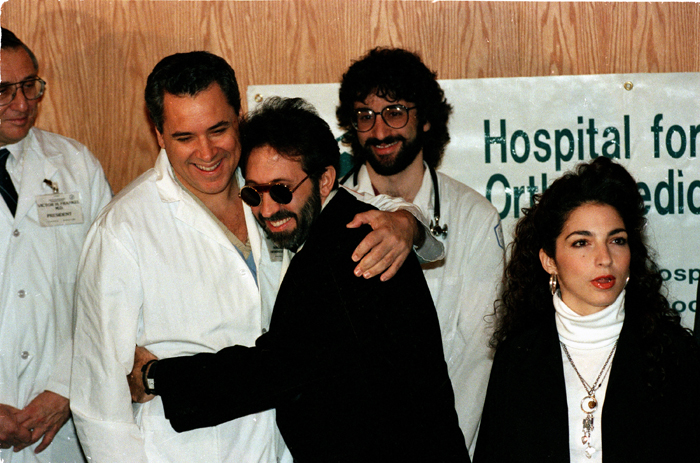 Emilio Estefan, producer-husband of singer Gloria Estefan, right, hugs her surgeon, Dr. Michael Neuwirth, prior to her release from the Hospital for Joint Diseases in New York City on April 4, 1990. Ms. Estefan suffered a serious spine injury when her tour bus was involved in an auto accident in March. At center is anesthesiologist Dr. Dave Albert. Doctor at left is not identified. (AP Photo/Peter Morgan)

At a press conference the day after the crash, orthopedic specialist Dr. Harry Schmaltz spoke about Estefan’s condition.
“This is a very serious injury and has potential for dire consequences,” he said, adding that the break led her to experience “a partial neurological deficit,” which caused some numbness and weakness in her legs and feet. He noted that she was able to move her legs and feet, however.
In the afternoon of March 21, Estefan was transported by medical helicopter to the Orthopedic Institute Hospital for Joint Diseases in New York City. The decision to move her came after Dr. Michael Neuwirth, an orthopedic surgeon at the hospital, agreed to take her on as a patient.
Estefan underwent surgery at the Manhattan hospital the following morning to fix the broken vertebra. Following the surgery, Neuwirth said that her “prognosis is excellent for a return to normal function.”

Gloria Estefan signs an autograph while walking into Scranton’s Ronald McDonald House on Aug. 12, 1991. Estefan and her family made a donation to the organization for the care and hospitality they received there when she was injured in March 1990. Times-Shamrock Archives

Over a year later and after months of physical therapy, Gloria Estefan returned to Scranton to say thank you. On Aug. 12, 1991, Estefan and her husband visited the Ronald McDonald House — where her husband and son had stayed while she was being treated at CMC — to make a $5,000 donation and thank the house’s staff.
Estefan revealed that she was in Scranton on Aug. 11 to appear at the federal courthouse for a settlement meeting regarding the civil lawsuit filed over the crash. U.S. District Judge Edwin Kosik presided over the case and later told The Scranton Times that the meeting did not produce an agreement.
“There are a number of items on the table,” he said.
On May 31 of this year, Estefan appeared on the BBC talk show “The Graham Norton Show” to promote her musical “On Your Feet!,” which recently opened in London. She spoke about the crash and how her mother traveled to Scranton after learning her daughter had been hurt.