On Saturday, October 31, 2020, acting legend Sean Connery died at the age of 90.  The actor best known for his role as James Bond also played a historical character that played a role in the history of coal mining in Pennsylvania.

In 1968, Connery arrived in Hazleton to started filming the film “The Molly Maguires.” In the film he played the role of Jack Kehoe, a member of the Molly Maguires. Joining Connery on set was Irish actor Richard Harris and Samantha Eggar.

Here is a Time Warp piece about the movie –

Eckley village outside Hazleton became the set for a major motion picture dealing with an infamous part of Pennsylvania’s past in the Summer of 1968.
In May, Paramount Pictures started production on “The Molly Maguires,” starring Sean Connery as Jack Kehoe, Richard Harris as James McParland/McKenna and Samantha Eggar as Mary Raines. Martin Ritt directed the film off a screenplay by Walter Bernstein.
The Molly Maguires were an underground organization of Irish mine workers in Northeast Pennsylvania who fought violently against mine owners in the 1860s and ’70s. The film deals with “the Mollies’” latter days, when Pinkerton detective James McParland infiltrated the group to gather evidence against its members. Kehoe led the group, and he and several members eventually were arrested, convicted and executed for their crimes.
To prepare Eckley for its close-up, Paramount spent $500,000 to build a coal breaker, transform buildings with antique weatherboards and bury electric and telephone wires. The studio also paid the rent of the residents of company homes in Eckley for six months. In the end, the film cost $8 million to make — $55.7 million in today’s money when adjusted for inflation.
Some residents also found work as extras in the film, making $15 per day. One extra from Hazleton was said to have become frustrated with Ritt’s numerous takes for scenes and said, “Believe me, I’m not going to make another picture,” leaving the Hollywood folks laughing.
The film was shot on location in Eckley, Jim Thorpe, Llewelyn and Bloomsburg with interior scenes filmed on Hollywood soundstages, wrapping there that September. Three people died during production: Elmer Rogers, chief of set construction, after a heart attack at Gus Genetti Moter Inn in Hazleton; Robert McCrellis, property master, also after a heart attack; and a third unidentified person who worked in the catering department. 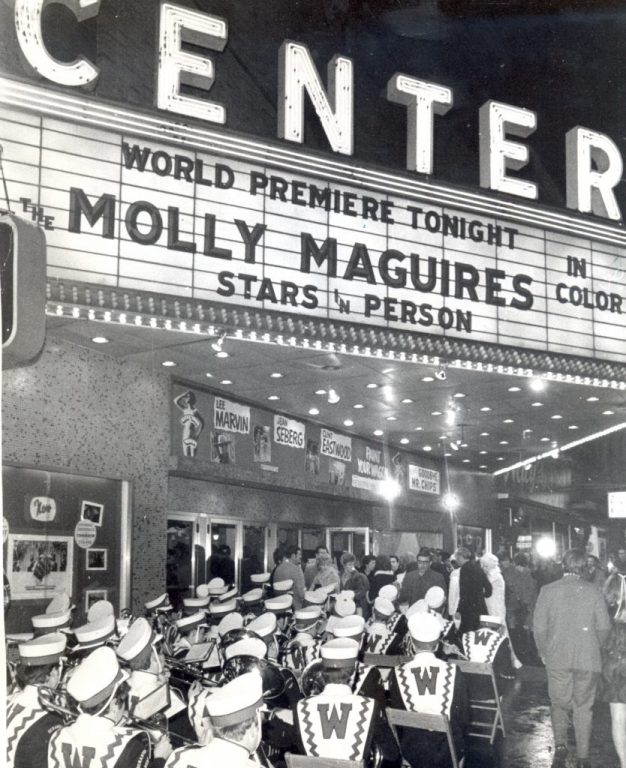 Members of the West Scranton High School Marching Band serenade those arriving at the Center Theater for the premiere of “The Molly Maguires” in Scranton on Jan. 27, 1970. Times-Shamrock Archives 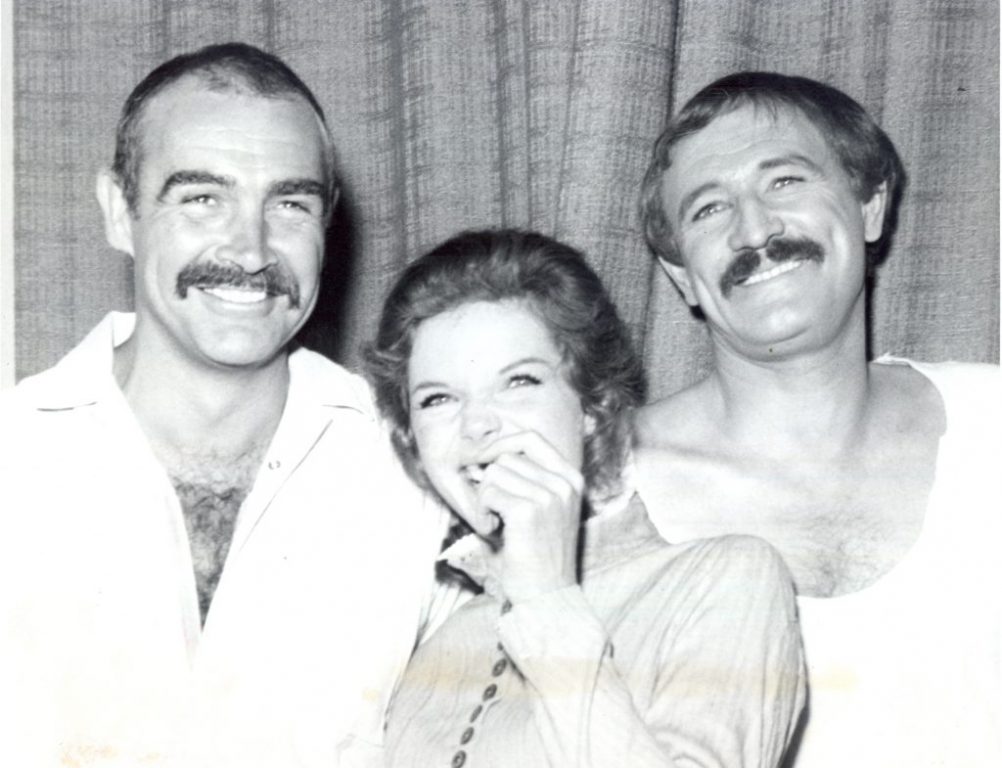 Stars of “The Molly Maguires” were in a happy mood when they posed for this photo during a break in filming in Eckley in 1968. From left: Sean Connery, Samantha Eggar and Richard Harris. Times-Shamrock Archives 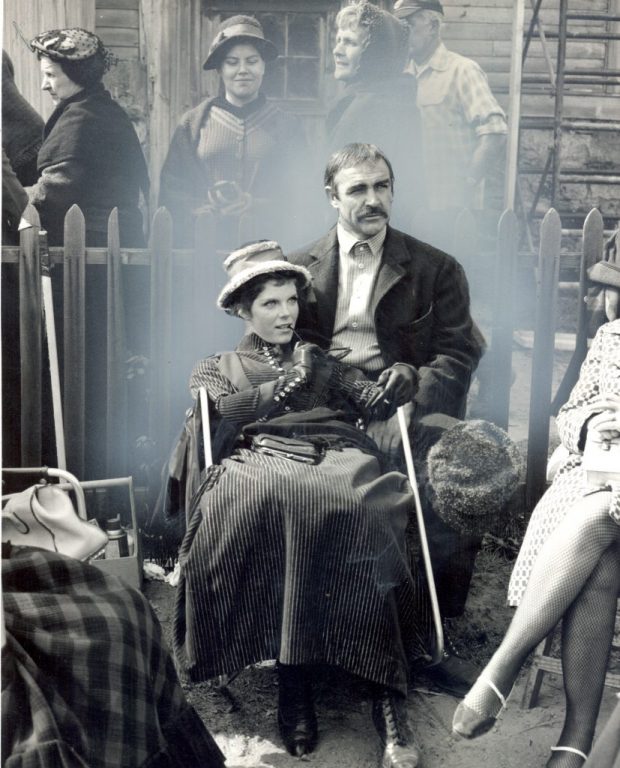 Sean Connery and Samantha Eggar on the set of the film “The Molly Maguires” in 1968. Times-Shamrock Archives 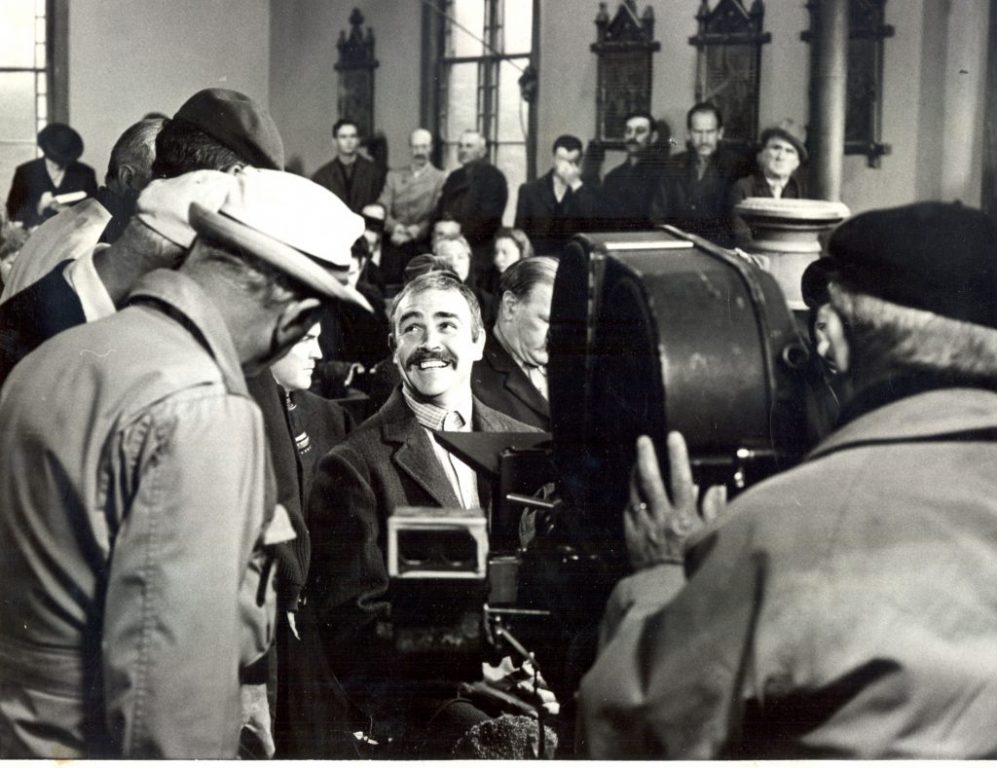 Sean Connery, star of The Molly Maguires, is getting to shoot a scene for the film inside the Immaculate Conception Church in Eckley in 1968. Times-Shamrock Archives 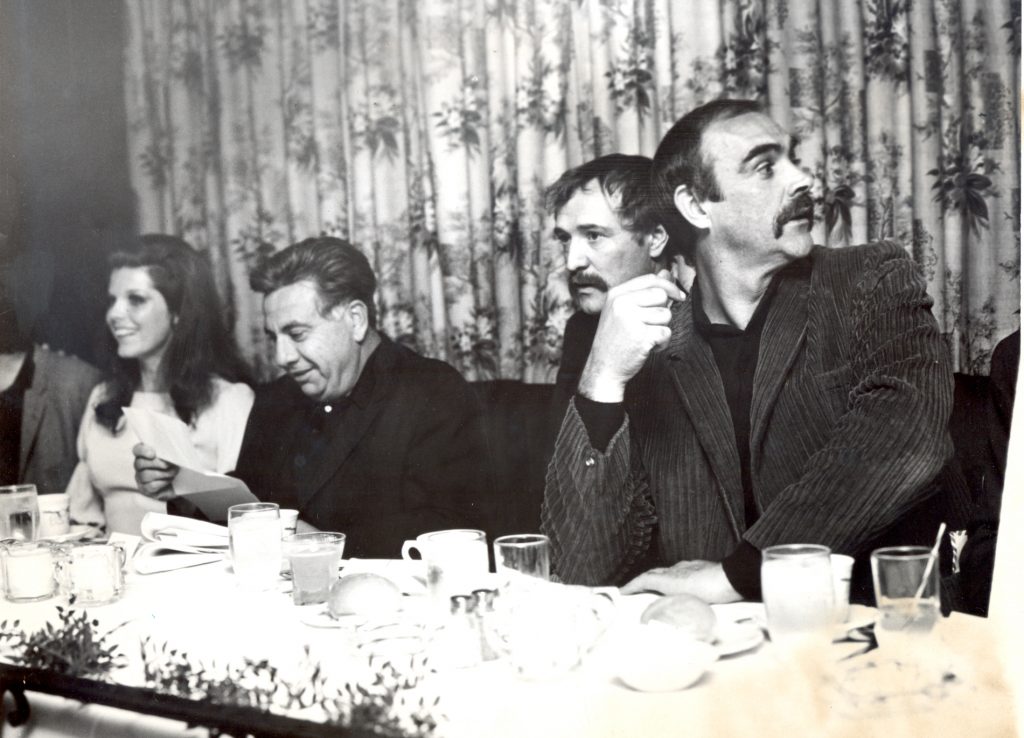 Sean Connery, right, and Richard Harris wear moustaches for their roles in “The Molly Maguires,” movie about 19th Century terrorists in lower anthracite coal fields to be filmed near Hazleton starting on Monday, May 6, 1968. Also at the head table for press party at Gus Genetti Motor Inn, Hazleton, are Samantha Eggar, and Martin Ritt, director and producer, of the Paramount Pictures production.Times-Shamrock Archives

The bright lights of Hollywood shone on Scranton at the premiere of “The Molly Maguires.”
Attending the screenings were cast members Malachy McCourt, Bethel Leslie and Frances Heflin plus the film’s co-producer and screenwriter, Walter Bernstein.
The film premiered to sold-out crowds at the Strand Theater on Wyoming Avenue and Center Theater on Lackawanna Avenue. Those going to the premieres also attended a cocktail party prior to the screening at the Hilton Inn on Washington Avenue.
The film also was shown in Wilkes-Barre at the Paramount Theater on Public Square and at Feeley Theater in Hazleton. The Scranton and Wilkes-Barre screenings raised money for charity, including $14,000 for United Cerebral Palsy.
The funds raised in Hazleton went to help establish Eckley as a “living museum” to be operated by the Commonwealth of Pennsylvania. Prior to the premiere, George and Elizabeth Huss, owners of the strip-mining company that owned Eckley village, donated $100,000; Paramount Pictures donated $25,000; and area residents donated another $61,000. Paramount also spent $500,000 to transform Eckley back to the way it would have looked in the mid 19th century for the film. At the Hazleton premiere, Gov. Raymond Shafer accepted the village’s deed.
Connery was scheduled to attend the local premieres, but a Paramount Pictures spokesperson said he wired a message explaining said that “personal difficulties” made it impossible. The spokesperson also said Connery would not be able to attend premieres of the film in Chicago, Pittsburgh and New York City. Also unable to attend were Harris, who was working on a film in Israel, and the director, Martin Ritt, who was finishing filming “The Great White Hope” in Barcelona.