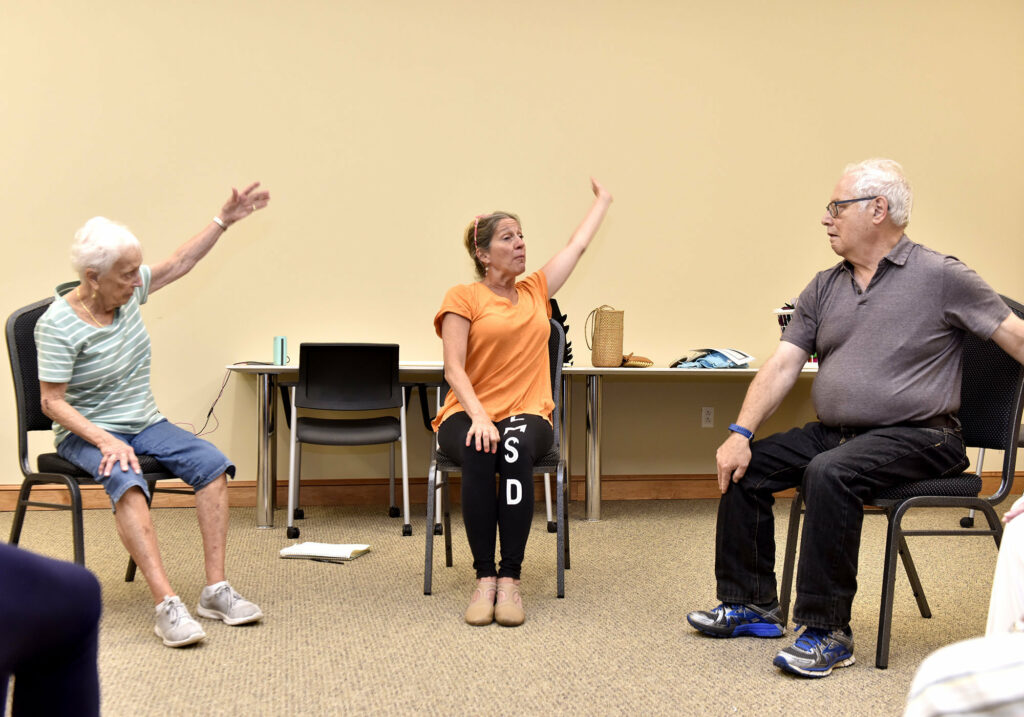 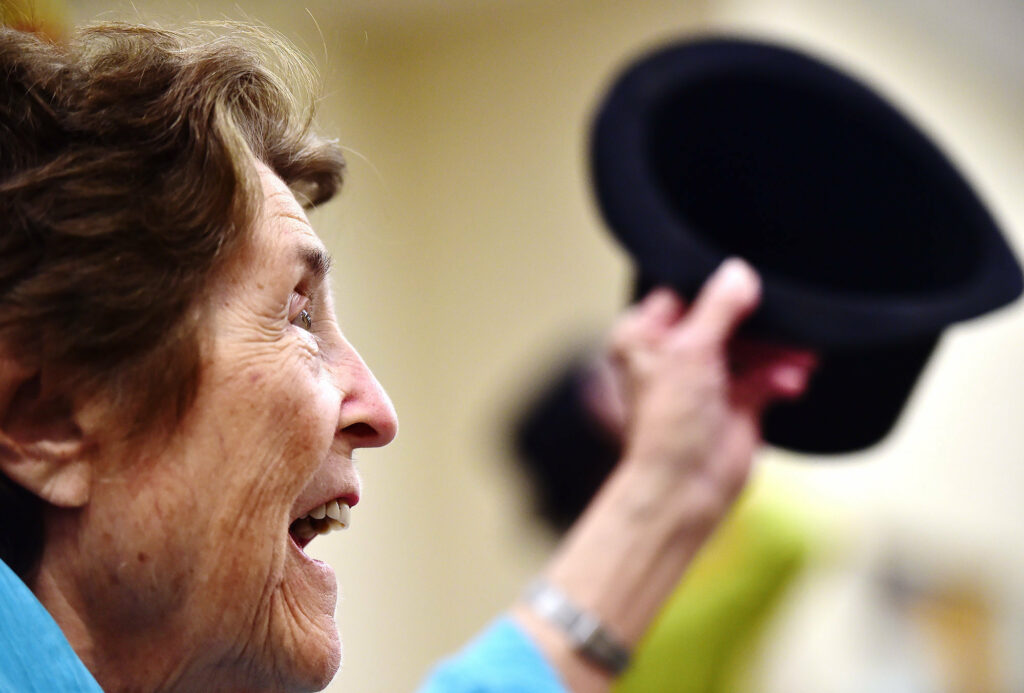 SEAN MCKEAG / STAFF PHOTOGRAPHER
Essy Davidowitz, 85, of Kingston, raises her hat during dance class for those with Parkinson’s disease at the Friedman Jewish Community Center in Kingston.

Esther Davidowitz was sitting in a chair, but ready to dance.

The 85-year-old came to the Friedman Jewish Community Center in Kingston on Tuesday for its first Dance for Parkinson’s class.

“Most people with Parkinson’s have difficulty walking or standing, so the idea that you could dance is really quite exciting,” she said while her fellow classmates gathered in a circle of chairs and instructor Linn McDonald prepared music and props.

The center is offering the class at 1 p.m. Tuesdays. It is free to people with Parkinson’s disease, thanks to a $15,000 grant from the Parkinson’s Foundation that paid for this and other classes.

Parkinson’s disease is a nervous system disorder that affects movement and speech. People with the disease might unintentionally shake their hands or fingers or have problems balancing.

Tuesday’s event was part of a continuum of care for managing the disease, said Nicole Lipinski, the director of healthy aging with The Jewish Home of Eastern Pennsylvania in Scranton. The Jewish Home works with Elan Gardens, a personal care facility, that offers programs for people with Parkinson’s, but there are many people who aren’t ready to live in a personal care home who can still benefit from programs like the dance classes, Lipinski said.

The JCC class is designed for people with the disease. Dancers warmed up and cooled down while seated. Some may stay in a seat or wheelchair for the entire session. Others might hold onto a chair so they don’t have to worry about falling.

“People may not feel they can do it, but they can,” said McDonald, who owns Linn McDonald School of Dance in Scranton and is earning a Dance for Parkinson’s certification.

McDonald’s father was diagnosed with Parkinson’s disease, one of approximately 60,000 Americans who are diagnosed every year, according to the Parkinson’s Foundation. Her father loved dancing, but she saw how easy it was to turn sedentary because of the disease. She hopes the class will offer a way for people to get exercise and practice an art form she loves.

The virtues of dancing are great tools for people with the disease. The class focuses on balance and flexibility and helps participants become more aware of the position of their bodies and how they move. She plans a lot of work with wrists, elbows and hands, part of the body that may tremble in people with Parkinson’s.

Beyond the physical benefits, it’s also simply fun. The class will bring together people whose lives have been changed by the same disease for an hour of dancing.

In her research, McDonald watched videos of people in similar classes.

“It looks like they’re having a ball,” she said.

Davidowitz and her fellow classmates looked like they were enjoying the program as the class went through its warmup exercises. The class started with an exercise to learn the everyone’s names. The group went around in a circle, and each person said his or her name and added a movement, like a clap or an arm wave, to a growing dance.

Then McDonald turned on a playlist of movie theme songs on piano and starting giving some dance steps: One, right hand hits thigh; two, left hand hits thigh; three, clap, four, both hands, down. Then she added in more instructions and the dancers, still seated, kicked up each leg. As “Mia and Sebastian’s Theme” from “La La Land” played, dancers swayed their arms in tune. They learned some ballet moves, like a “plié,” a small squat, and a “port de bras,” a ballet arm movement.

More dancing followed. One student stayed in her chair to try out the moves, but most of the class left their chairs. After practicing more techniques, it was time for the finale. McDonald led the group, outfitted with top hats and canes, in a rendition of “One” from the Broadway show “A Chorus Line.” Holding a 4-pound exercise bar, she showed the group a four-step march that transitioned to a sideways kick and then a walk around the cane while flapping their hats. Finally, they gathered in a circle again to relax and cool down.

“I feel stronger and more flexible,” said Marshall Kornblatt, 72, of Kingston, who was diagnosed with Parkinson’s disease seven years ago.

Living with the disease, he said, means coping with a situation in which the messages his brain sends to his muscles don’t always go through. Medication and exercise, like Tuesday’s class, help him treat the condition.

“Yes, it does,” Kornblatt said. 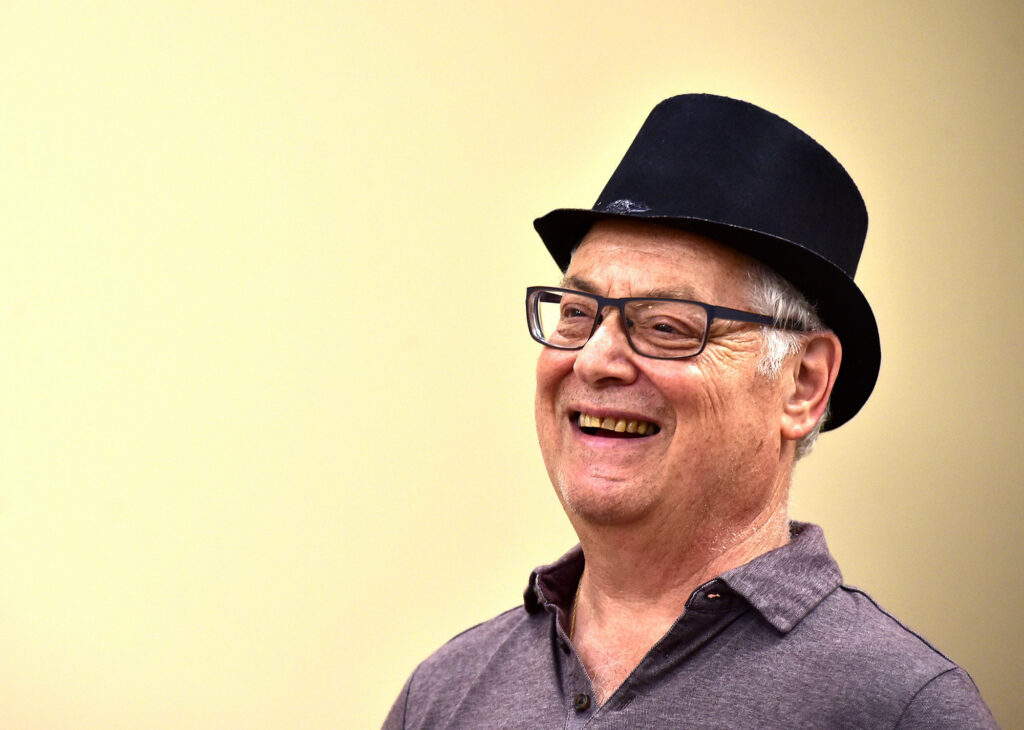 Dance for Parkinson’s classes are held at 1 p.m. Tuesdays at the Friedman Jewish Community Center, 613 S.J. Strauss Lane, Kingston. The classes are free for people with Parkinson’s disease. You do not have to be a JCC member to attend. To register, contact Sharon Matylewicz at the center at 570-824-4646, extension 211.

The JCC also offers two other free weekly events for people with Parkinson’s. A fitness classes meets at 1 p.m. Mondays and Wednesdays. The small group training classes focus on improving mobility, function, strength and balance. A support group will meet every second Thursday of the month. That class will meet at 1 p.m. as well, except for the first meeting this Thursday, which begins at noon. Participants should contact Sharon Matylewicz to register for those meetings.

Parkinson’s disease is a neurodegenerative disorder that affects predominately dopamine-producing neurons in a specific area of the brain, according to the Parkinson’s Foundation. By 2020, almost one million people in the United States will be living with the disease.

Symptoms usually develop slowly over years, and the progression is often different from person to person. People diagnosed with Parkinson’s disease often have trouble with movement, balance and speech.

The cause of the disease remains largely unknown. There is no cure, but treatment can include medications and surgery and can improve quality of life for patients. Those treatments can be expensive. Medication costs and average of $2,500 per year and therapeutic surgery can cost up to $100,000, according to the foundation.

The Parkinson’s Foundation recommends regular exercise as one of the ways to help people living with the disease improve symptoms and mental health.

Visit parkinson.org for more information about the disease and ways to improve the quality of life for patients.

Bill Wellock is a staff writer for The Citizens’ Voice in Wilkes-Barre. Contact him at bwellock@citizensvoice.com.

Bill Wellock is a staff writer for The Citizens' Voice in Wilkes-Barre. Contact him at bwellock@citizensvoice.com.