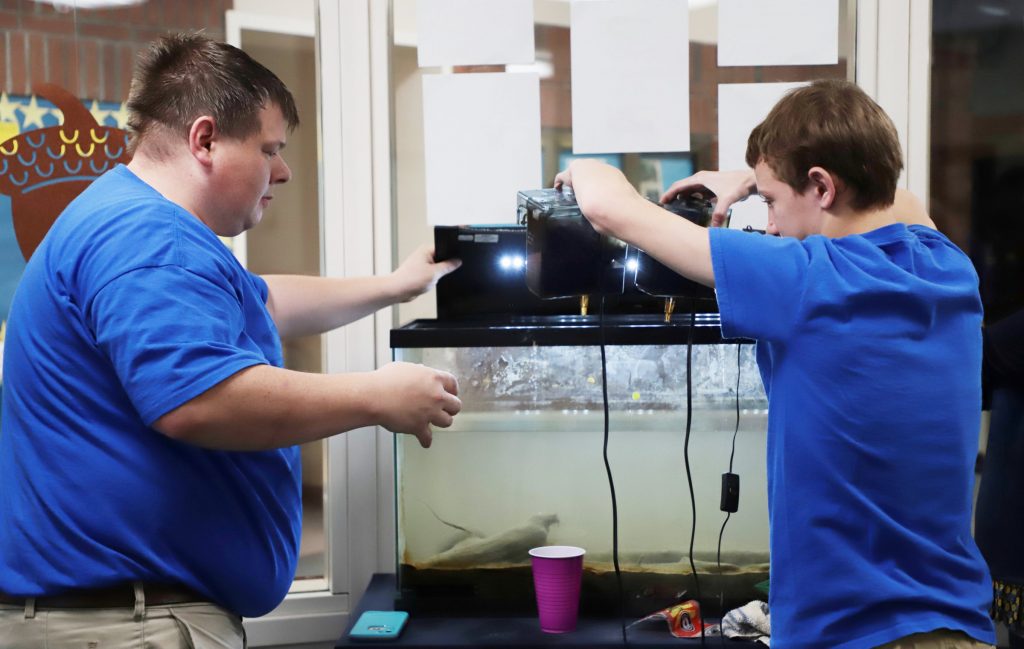 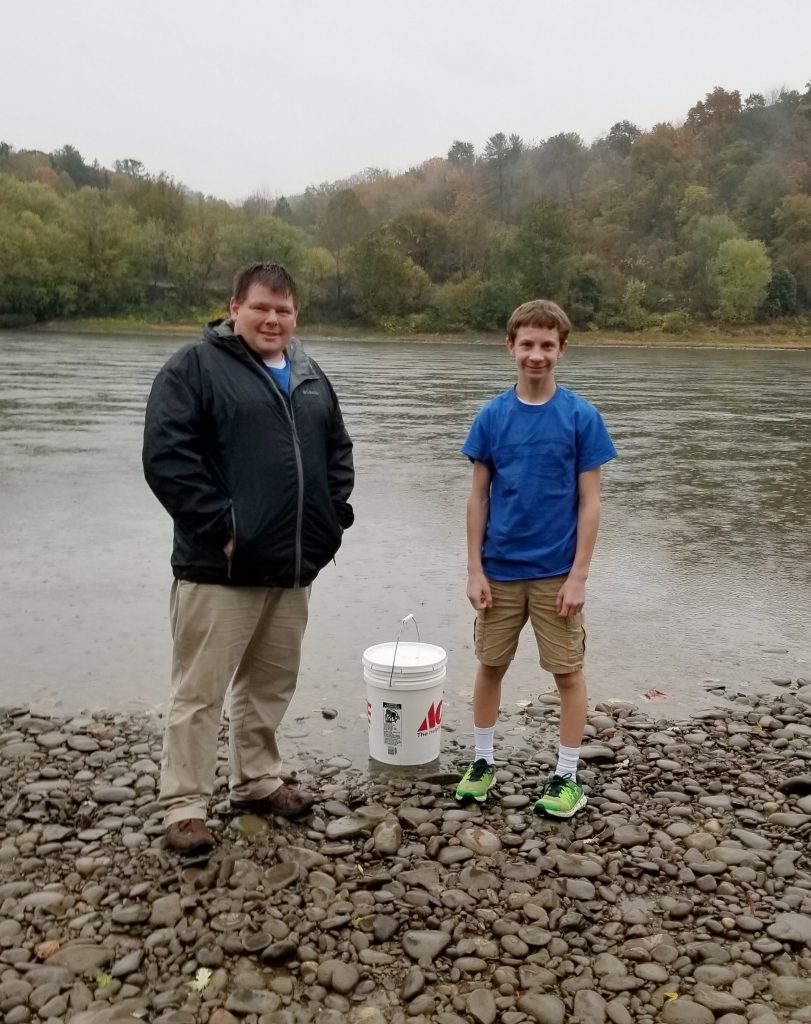 SUBMITTED PHOTO
Christopher Hall and Brady Kareha at the Falls Bridge to release the eels on Wednesday, Oct. 16.

Christopher Hall remembers five years ago, teaching a student who was passionate about science.

Fast forward, the then-fourth-grader is now a 15-year-old freshman at Abington Heights High School and, with the mentorship of Hall, recently completed an eel conservation project.

Brady Kareha has loved all aspects of science for as long as he can remember.

“I knew he was more of an outdoors person,” said Hall, reflecting on some of his first experiences with Brady.

“He’s a person who does a lot of thinking. I could see him going into the sciences or biology,”

Last year, Brady took part in an enrichment project as an independent study. He connected with the Susquehanna River Basin Commission (SRBC) and was introduced to a project called Eels in the Classroom, which began as an experiment at Lewisburg High School in 2018.

Eels in the Classroom is conservation effort by the SRBC to save American eels. After a successful attempt in Lewisburg, the SRBC delivered swarms of eels to various school districts across Pennsylvania. Students were to raise the eels then release them in the river once they were strong enough.

The diminishing eel population comes from the recent spike in dams throughout the Susquehanna River. Eels lay their eggs in the ocean where they hatch. They then swim to rivers, where they spend most of their adult lives before returning to sea to breed, lay eggs and die. The dams prevent this crucial member of our ecosystem from going back and forth. In an effort to increase their population, seven school districts in the state were each given about a dozen eels to take care of and release.

When Brady learned about the project, he was eager to participate. He saw a feature on TV about Lewisburg High School raising eels. After communicating with the SRBC, he had one problem. The SRBC was only giving out eels to school districts, and Brady planned on doing the project as an individual.

That’s when Brady sought help from Hall, his former teacher, who currently maintains saltwater fish tanks both in his home and his fourth-grade classroom at Clarks Summit Elementary School, Brady’s old stomping grounds.

Now, with Hall and the Abington Heights School District behind him, Brady explained to the SRBC how the school would support him, and what he would do to complete the project. The SRBC agreed. Brady would be the eighth “school district” to receive a swarm of eels.

receive. He purchased everything including the tank, filters and food, and collected mud, dirt, rocks and other organic elements to put in the tank. When he received notice in May that the eels would arrive within a few days, he was excited to share the project with the fourth-grade students. They became very curious as well, according to Hall.

“There was a lot of interest in it when we first set up the tank. When we started to move stuff around in the school, kids started to wonder what was going on,” Hall said. “It was a conservation project, so it teaches them to take care of the world, take care of the rivers, everything depends on something else. It’s a whole ecosystem, and if we lose the eels, what’s next to go?”

Brady enjoyed making educational posters to hang around the tank for the students to see. He also liked explaining the details of the project to anyone who would walk by.

Even though he is a student in the high school and a member of the Russian team and the wrestling team, he still had time to feed the eels three times a week and clean the tank once a week from May through October. That helped him develop his own relationship with the eels.

“All fish are smart in that they know who feeds them,” said Brady. “They know if you’re there to hurt them or just give them food. Whenever I come around, they know they always get fed, even if they have to wait for me to clean the filters.”

As the weather turned colder, Brady prepared to release the eels. On Oct. 17, he took the seven eels that survived out to the Falls Bridge in Falls Township and released them into the Susquehanna River.

It was bittersweet for him to see his project come to an end.

“I’m excited. I hope they’ll do well. They’re used to seeing me around and having me feed them,” he said. “They’re smart, inquisitive and they have some size to them, so they should be able to figure things out. It’s a little saddening, but I hope that I’ll be able to do this again next year.”

It was a great learning experience for Brady, who would like to be a paleontologist (a scientist who studies fossils) some day. He learned more about the environment and how important it is to keep it clean. He hopes the current fourth graders understand that message as well.

According to Hall, it also showed a lot about Brady’s character.

“It shows the responsibility and his empathy toward the animals,” Hall said. “He has always been a good, thinking kid. He’s really always wanted to do the right thing. When he got a project like this, he took it upon himself to do the research and he made sure he knew what he wanted to do and how to proceed. He was certainly not a slacker.”

Brady said he hopes to do the same project again next year, and Hall expressed interest in overseeing it again.