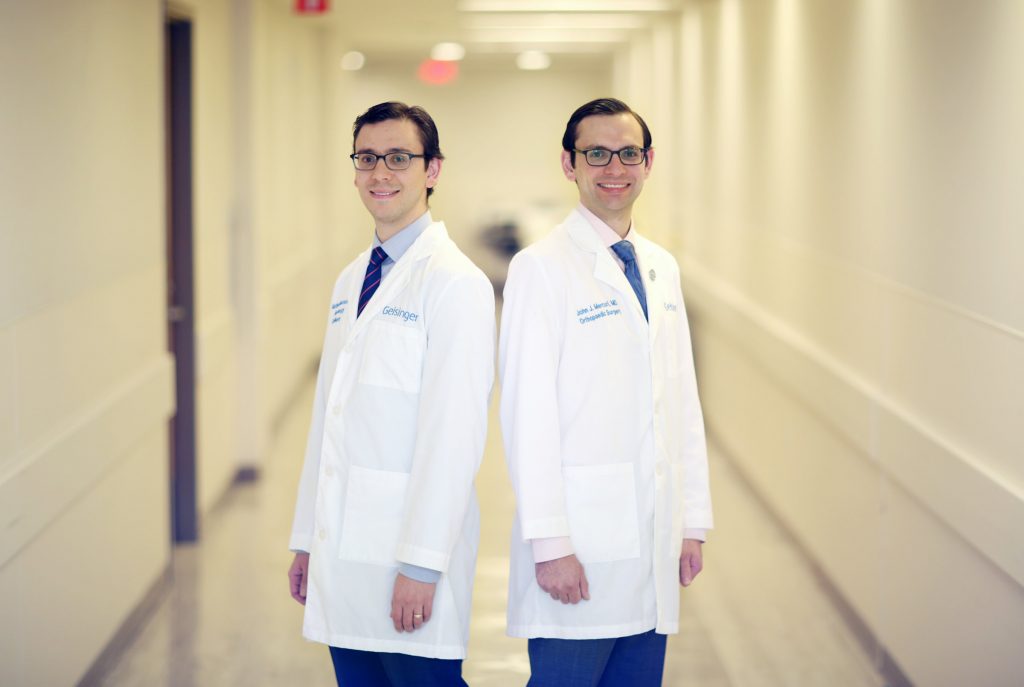 The Mercuri brothers get the twins question a lot.

They’re three years apart, but they understand why people ask.

The two young doctors, John, 34, and Matt, 31, are about the same height. They share the same slight build and matching gait as they whisk through Geisinger Community Medical Center.

They wear the same style glasses and both speak in lofty terms about their purpose as physicians.

Other than their chosen specialties — John Mercuri is an orthopedic surgeon and Matt Mercuri is a neurologist — they charted near identical career paths, including their return to Northeast Pennsylvania to practice and settle down.

They both went to Scranton Prep, then the University of Scranton. They studied medicine at New York University and stayed in the city to complete residency training and fellowships.

That they came back at all busts current trends for young doctors.

The Association of American Medical Colleges found that between 2008 and 2017, 54% of physicians practice in the state where they completed residency training. There’s plenty more research that shows doctors tend to stay put where they complete the last formal part of their training. That’s why academic institutions like the Geisinger Commonwealth School of Medicine in Scranton want to get med school students into underserved and rural areas for residency training.

The Mercuri brothers, however, challenge the statistics, perhaps because New York City attracts more docs who never intend to stay.

“In my orthopedic surgery class, it was not the case that people stayed there for practice,” John Mercuri said. “Everybody dispersed across the country from Seattle to Stowe, Vermont.”

His return was deeply personal, he said, but also rooted in finding a fulfilling career.

“Obviously there’s an innate draw to come back home where all your family’s living and the place where you grew up,” he said.

“It became apparent to me, career-wise, that it was more than viable,” John Mercuri said.

They both agree that older brother Erik Baker opened their eyes to the medical field. Until theirs, no previous generation of Mercuris pursued careers in medicine, though they had no shortage of highly motivated role models. Their mother is a certified public accountant. Their father, an attorney by training, is the retired district magistrate John J. Mercuri, who served on the bench in the North Pocono region for 34 years. Baker studied at the University of Pittsburgh and helped lay the groundwork for his younger brothers.

“We had an example of a sibling who did it before we ever got around to having to make any of those decisions,” John Mercuri said.

Medicine hadn’t been the first choice for either of them. John Mercuri studied philosophy; his brother studied the humanities. But independent of each other, they both turned their attention toward medicine.

“When the time came to start thinking seriously about what to do for a career, the prospect of medicine was stronger than anything else,” Matt Mercuri said. “And I think it was compatible with a background in the humanities. … Can there be a more human art than the art of medicine?” he said, pausing before chuckling.

“I think I put that in my personal statement,” he said.

Their Jesuit education, which leans heavily on service as a way of life, at Scranton Prep and the University of Scranton might have had something to do with it, too, they agreed.

“You find purpose and you make the most meaning in service to others,” Matt Mercuri said. “I think that I was also inspired by watching our father, who spent his life in public service as well.”

Geisinger, the enormous nonprofit health system that is strengthening its Northeast Pennsylvania position, hired both brothers.

John Mercuri said he explored other orthopedic practices in his quest to come home, but found Geisinger was bringing big-city technology, the kinds of tools, specifically robotics that he trained on in New York, to his home turf. He was also impressed by the health system’s novel guarantee on joint replacement surgery outcomes.

“That sort of forward-thinking, cutting-edge environment is extremely interesting and I’m glad to be a part of it,” he said.

Matt Mercuri enjoyed his nine years in New York but missed the sense of community he knew he had left behind.

“I was literally surrounded, every day, by millions of people on this relatively small island, and yet I felt completely anonymous walking down the same sidewalk every day,” he said. “It’s not like that here. That was apparent on day one.”

When he moved back, he learned that his neighbor was his grandfather’s internist.

“The moment I arrived … community,” he said. “That’s the stuff.”