We last checked in with Clarks Summit native and musician James Barrett in 2016 when he was a senior in high school about to release his first solo record. In the years since then, Barrett, 22, has grown personally and musically to embody a whole new sound and lyrical message. With a new album on the horizon (set for release Friday, Oct. 11), Barrett is giving listeners the chance to pre-order limited edition vinyl pressings of his new material, called “The Price of Comfort,” starting Aug. 23. Read one to find out how his music took shape and what you can expect from the new album.
Q: Who are your biggest musical influences in general, and more specifically, for this record?
A: Some of my biggest influences for this record are some of my favorite bands. The Gaslight Anthem and the Menzingers have been huge influences for my entire life, but more recently I discovered an Australian rock band called Gang of Youths. They have an album called “Go Farther in Lightness” that easily became one of my favorite albums of all time and definitely had a big part in shaping the sound of my record. 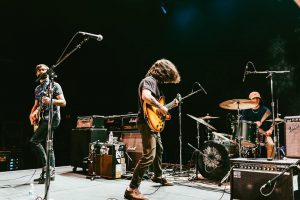 Q: Tell me about the songs found on “The Price of Comfort,” and how you came up with that album title.

A: The songs on this album cover a bunch of different topics, a lot dealing with my personal experiences while growing up over the last few years. My last release came out when I was 20 years old, and I feel as though my life and myself has changed immensely since then. The album deals a lot with personal growth and the trials of trying to make light of difficult situations such as breakups, mourning the deaths of loved ones, my personal mental health struggles, and how all of these things directed me to where I am now. The album kind of shows the highs and lows of the last few years, but ends on a note of hope that though all of these things happened, life continues if you allow it. The title of the album comes from a lyric in the song “On Comfort.” When I wrote that song, the title hit me and I kept it ever since. I think all of us long for life to be comfortable, but sometimes too much comfort can lead to a lack of ambition to keep improving. We can easily become trapped and begin to notice the world around us continuing to change while we remain stagnant and soon become uncomfortable.
Q: Describe the recording process for this record. (Where, how long it took, who supported or contributed musically)
A: The process for making this album took a very long time. I began writing songs about two years ago, with the exception for song “The World Back Then.” The music in that song was from an idea I had back in tenth grade, and it finally found a home on this record. Over the last two years, I spent a lot of time hiding in my basement where I would play guitar for hours a day. By July of 2017, I began trying to find a band to start playing the parts I wrote so I could hear them as a whole. It took awhile to get a consistent lineup, but now my live band consists of my brother Tyler, who drums and also drummed on the record; my friend Doug Griffiths, who plays guitar and did a few guitar tracks and trombone on the album; Angelo Maruzzelli, who recorded my first solo album in 2015 plays third guitar and synth; and my lifelong friend Chris Kirby just started playing bass for us. The entire album was recorded in Philadelphia by my incredible friend Jake Checkoway. Jake has done all of my recordings since I met him in 2017. We started doing some early work last September. My brother tracked all the drums over three sessions at a studio called the Boom Room in Philly, and then everything else was recording in Jake’s bedroom. I would travel almost every weekend for several months to work on the album. It became extremely exhausting a few months in, but I knew that this was something special and all the struggles of making it happen made it all the more meaningful to me. I didn’t want to rush anything. We finished the record in June, and Jake mixed and mastered the songs over the next month and a half. It was a super long process, but worth it all the way.
Q: Let me know full details on any upcoming local shows, and how people can find/buy/listen to your new music.
A: As of right now, we are pretty quiet with shows. Angelo also plays in University Drive, a phenomenal band fronted by my friend Ed Cuozzo. They are going on tour for the next month and a half so we are gonna just keep practicing until he returns. We are planning a release show for Friday, Oct. 25 somewhere in Scranton TBD. All my music can be found on all streaming platforms. We are also pressing this record to vinyl and fans will be able to pre-order starting Aug. 23 when we announce the record.
Q: What do you hope is listeners’ takeaway from this new music?
A: I hope this album helps other people who are dealing with similar situations that I went through while writing it. I believe all of us are a lot alike and share similar hardships, just from different perspectives. My favorite records are the ones that hit home for me and are relatable. I hope that this album could be that to some people, even if it’s just one person that finds help through it. That is what makes writing music fulfilling.
Fine James Barrett and his music on Soundcloud, Instagram, Facebook,Twitter and Spotify.