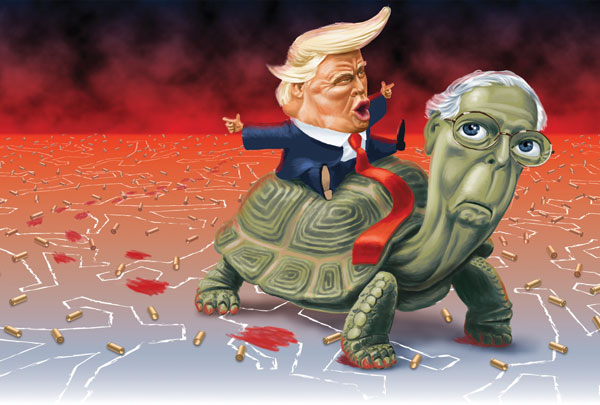 A steady stream of gunfire

In journalism, an evergreen story is one that isn’t tied to a particular time frame, season or event. It can basically run anytime and still be fresh.

My column today features a website, Everytown.org, that advocates for gun safety. It’s a subject that in a better world would not be evergreen, but because of the neverending stream of gun violence in our country, it unfortunately and undeniably is.

Everytown traces its roots to 2006 when Mayor Michael Bloomberg of New York City and 14 other mayors around the country cofounded Mayors Against Illegal Guns. In 2013, they merged with Moms Demand Action, another group formed for the purpose of stopping gun violence. In 2014, they became Everytown for Gun Safety. In 2018, after the Parkland school shooting, Everytown joined forces with Students Demand Action, a group of high school and college students dedicated to stopping gun violence.

The three groups, along with many survivors of gun violence, use the site as a platform to educate and advocate for policies that will reduce gun violence.

The home page features a slider at the top with several relevant topics. The first one is a letter to the U.S. Senate demanding action on House-passed bills that are being held up by Senate Majority leader Mitch McConnell. There’s a form that lets you send the letter in your name.

The most powerful part of the site is a section called Moments That Survive. As you scroll down through the section, a series of photos of victims and quotes from survivors appear to emerge from the background and travel forward to the front of the screen. Clicking on a photo or quote opens up a page that details the story of how gun violence impacted that particular person. It’s not just mass shootings. It’s everyday acts of gun violence, suicides and accidents taking a terrible toll. The tales, which pesonalize lost innocence and potential, are heartbreaking.

There are sections that take you to affiliated sites where you can dig deeper into the issues and policy proposals being suggested. The Act section details concrete things you can do to help the movement. The Press section contains articles and press releases dealing with gun violence.

Everytown is designed well with solid typography and good use of images. My only issue with it is that the links often take you off the site to an affiliated one. The sites are similar in design, so you don’t always realize you’ve left one until you’re pretty deep into the next one.

George Banks in 1982, Columbine in 1999, Sandy Hook in 2012. The mass shootings used to be so shocking and spread out that you knew them by name. Now, decades later, they are so prevalent that they tend to blur together, losing their uniqueness to all but those directly impacted. They have become evergreen.