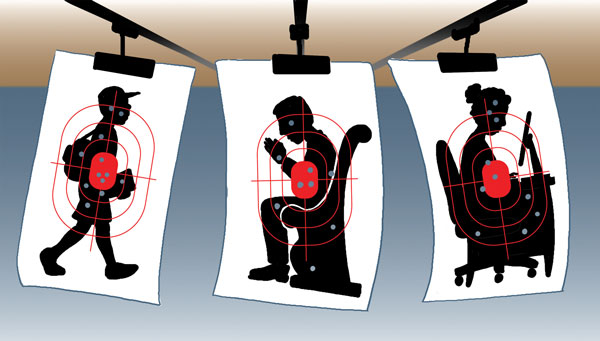 Gun control is worth a shot

Website provides data on gun violence in the United States

GunViolenceArchive.org, a website that tracks gun violence in the United States, defines a mass shooting as an incident in which four or more people are shot, not including the shooter. In Virginia Beach, 13 people, including the shooter, were killed and six were wounded, including a police officer responding to the scene of the tragedy.

The site collects and categorizes gun violence statistics daily and provides real-time numbers for all manner of gun-related incidents. This includes the criminal use of guns, suicides and instances where law-abiding citizens use guns to defend themselves. GVA does not advocate against gun ownership, but it is against gun violence. It’s goal is to provide accurate data for those who develop policy and regulations concerning guns.
The home page provides a daily update of gun incidents for the year across the country. As of June 4, there were 22,608 total incidents, 5,963 deaths and 11,434 wounded. Children under 18 accounted for 1,376 of the injured and killed. The total number killed works out to a little more than 38 people a day.

Because the daily deaths are usually individual incidents spread out across a country of over 300 million people, they don’t peak the national interest. If there was a single mass murder incident of 38 people every day, perhaps our government would finally take effective action against gun violence.

GVA also features a series of maps pinpointing where different types of gun incidents have occured. In addition to the maps, there are reports for each type of incident. The reports detail the date and location of each incident as well as the number and ages of people involved, whether they were killed or injured, the type of gun or guns used and more.

Another section of the site lets you search for incidents by congressional district. And while GVA doesn’t offer its own opinions on guns, it has a section with links to articles on other sites that address various aspects of gun violence.

This site is cleanly designed and easy to navigate. For people who want to research the issue, it provides lots of valuable data. And even if the site doesn’t take a position on gun control, reviewing the data makes it obvious that more needs to be done to curtail gun violence in this country.