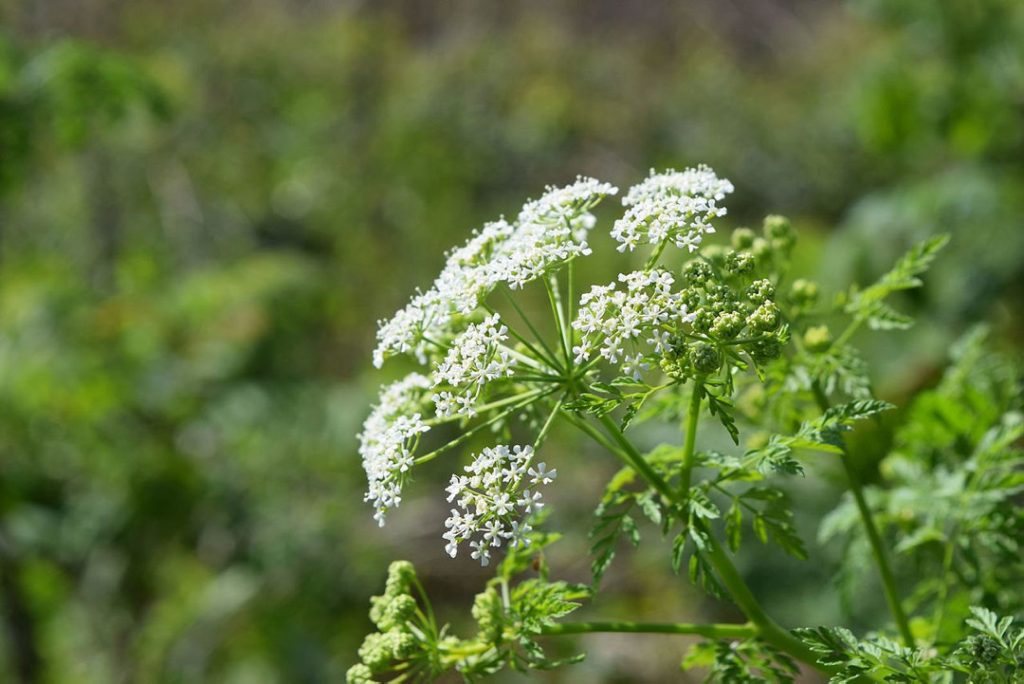 But don’t go picking any of those bright blooms without protective covering. And you really don’t want it for any floral arrangement.

Those plants are poison hemlock, and they live up to their name and reputation. Widely presumed to be the source of the tea that killed Greek philosopher Socrates in 399 B.C., every part of the plant is poisonous.

According to Penn State Extension, “The sap can cause skin irritation on some people. So be sure to wear protective clothing and gloves when handling the plant or when weed-whacking.

“It is poisonous when ingested by humans and livestock. The plant contains several closely related pyridine alkaloids with the main one being coniine, a colorless, volatile and strongly alkaline oil.”

Significant poisoning can result in muscle paralysis and suffocation.

Penn State Extension offers the following tips for identifying poison hemlock: “In addition to its fern-like, glossy green, lacy leaves, the plant has a hairless, hollow main steam with purple blotches/spots which branches. Its large flower structures are composed of many smaller white flowers. Plants typically grow 2 to 6 feet tall and have a parsnip-like odor when the leaves are crushed.”

Poison hemlock grows from seed and is a biennial plant with a basal rosette of leaves during its first year. After it overwinters, in late April or early May, it bolts into an erect branched plant producing prominent white flowers in an umbel generally in June and July. Seed drop follows soon after the flowers.

Individual plants can be easily dug out with a shovel, according to Penn State Extension. Larger infestations can be cut with a mower or string trimmer or may require the use of an herbicide. Several herbicides are effective for control. Herbicide applications are most effective when they are sprayed in the fall when poison hemlock is in the rosette stage or before it bolts in the spring. Effective herbicides include 2,4-D + dicamba, Crossbow (2,4-D+triclopyr), or glyphosate as a spot treatment.

As widespread as poison hemlock is today in North America, it is native to Europe, northern Africa and western Asia and was introduced here as an ornamental garden plant in the 1800s.

“This weed has been expanding to new regions in the state and its growth has become more aggressive,” Jeffrey S Graybill, extension education agronomist, noted in an alert issued by Penn State Extension.

Poison hemlock was listed as a Class B noxious weed in Pennsylvania by 2018 legislation that created a Controlled Plants and Noxious Weeds Committee and sorted select noxious weeds into three priority categories.

Graybill urged, “Identification and eradication of this plant wherever livestock could come in contact is important.

“Also, hayfields and meadows which will be harvested should be closely walked, eradicating hemlock prior to any harvest. The toxicity can remain when harvested with dry hay or baleage, therefore, do not feed contaminated hay.”