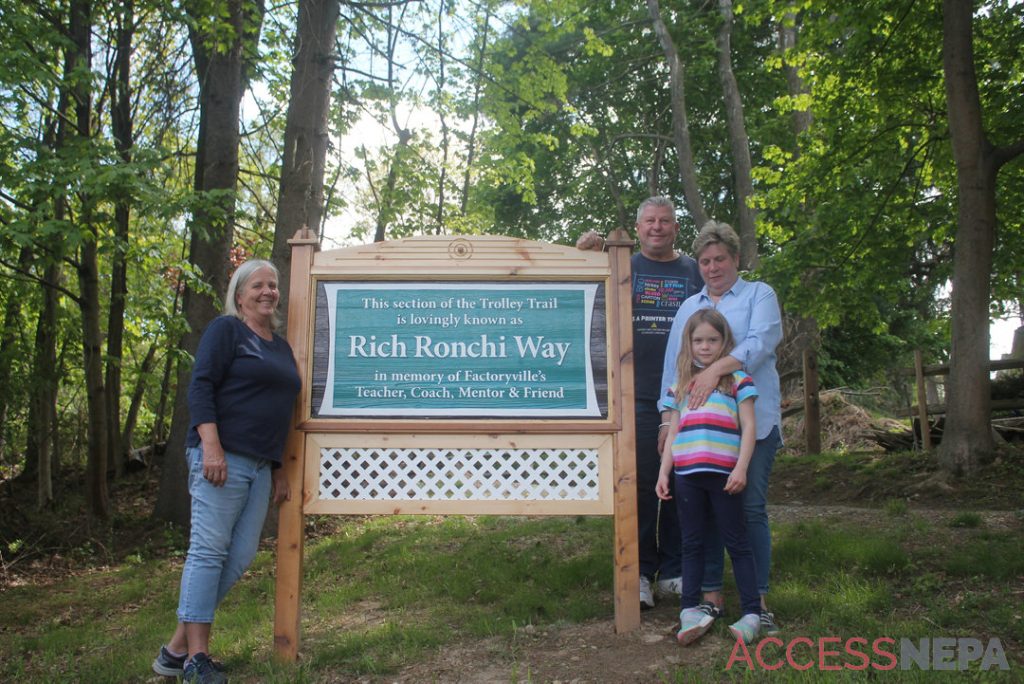 A stretch of the Countryside Conservancy Trolley trail in Factoryville is now named for one of Lackawanna Trail’s most beloved coaches.

Ronchi was a biology teacher for 30 years, spending 15 years each at Lackawanna Trail High School and Wallenpaupack Area High School. He also coached football, basketball, baseball and track at both schools during his time there. He passed away on Dec. 10, 2019.

Factoryville resident and friend of Ronchi Ed Nowakowski was always looking for ways to honor him, so he and a couple other friends of Ronchi approached the Conservancy about naming a stretch of trail after him.

“I went to the Conservancy board and they were absolutely fine with it as long as we got approval from Factoryville borough,” Nowakowski said. “They were absolutely ecstatic about it as well, because they know how many people Rich touched.”

The Rich Ronchi Trail was officially inducted on Saturday, May 8. A ceremony was held with Ronchi’s family and friends in attendance. Gail Parry, a lifelong friend of Ronchi said that naming part of the trail after him “felt right for how many people he touched through the years.”

“We needed to do something,” Parry said. “It’s still a shock to all of us that Rich isn’t with us anymore. I’ve already seen lots of people walking and biking on the trail, which is exactly what Rich would have wanted.”

Before officially moving forward with the project, Nowakowski and Gail went to Ronchi’s widow Colleen to ask her permission for renaming the trail. She was honored at the proposal, but still wishes he were here helping out with Christy Mathewson Little League, and every other sport during its season.

“It’s still a little surreal,” Colleen said. “For as many people that loved him, he was very comfortable with being behind the scenes. Being on a team was one of the things that motivated him. Whenever I walk this trail that’s what I think of.”

Perry said that she hopes the trail will be a special place for Ronchi’s grandchildren, Avery and Abbey, and that they will be able to think of their grandpa whenever they walk on it.

“I think it will be so cool for Avery and Abbey to walk and ride bikes on a trail that is named after their grandfather,” Perry said. “They’ll be able to tell that to other kids, and then the legacy of Rich will live on for a long time.”

Nowakowski said that the amount of people at the dedication ceremony, including coaches from Trail and Wallenpaupack, and most importantly, his Factoryville friends, showed just how many people he impacted.

“The parking lot was full for the dedication on a day where the weather really wasn’t cooperating,” Nowakowski said. “It really amazed me and showed how much that he meant to this community. It was great to see.”

The entrance to the Rich Ronchi Trail is located at the intersection of Riverside Drive and Church Street in Factoryville. The trail is open from dusk until dawn.