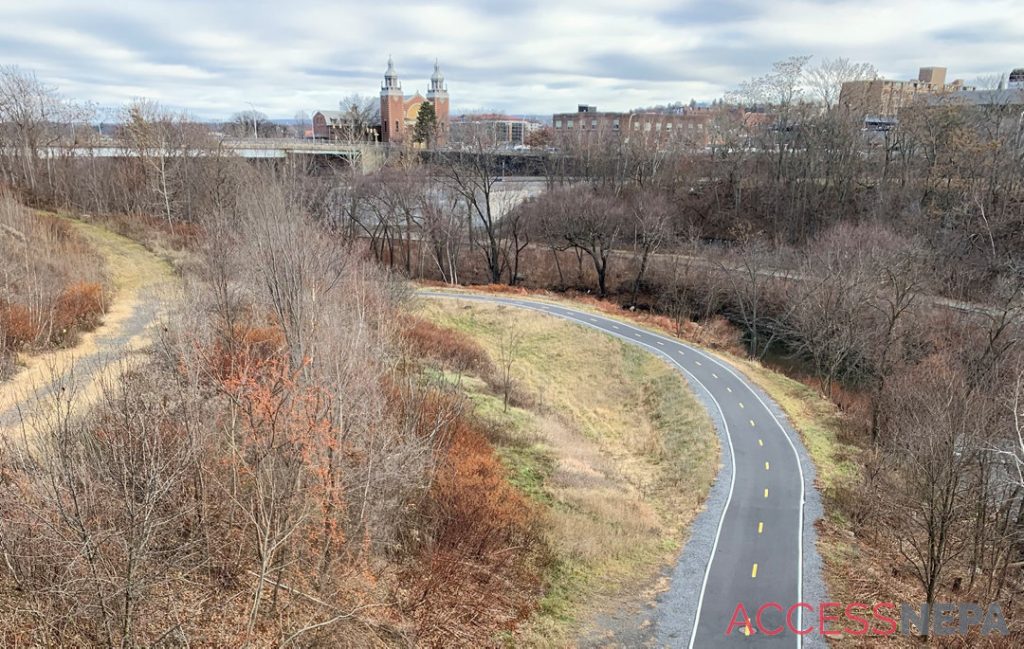 Keep right and pass on the left.

The Lackawanna River Heritage Trail has new lines painted to help users do just that.

The Lackawanna Heritage Valley Authority, which manages the trail, recently painted lines on paved portions of the trail in Scranton and Carbondale.

Because of the COVID-19 pandemic this year, trail use has increased, said Owen Worozbyt, LHV’s trail and environmental projects manager. Trail use in Scranton this year has been up an estimated two to three times over prior years, he said.

The painted lines make paved asphalt trail sections resemble narrow roads, with continuous white striping on both edges and a dashed yellow line down the middle. In Scranton, lines were painted in early November on about 800 feet of paved trail downtown in the Lackawanna Avenue area. In Carbondale, lines were painted in early December on a half-mile section in the Enterprise Drive area.

“We’ve had so much more traffic on the trail and a lot of the people don’t understand basic trail etiquette. Just like driving down a road, stay to the right,” Worozbyt said.

As walkers, runners and bicyclists share the popular pathway, some of them are sometimes oblivious to the others. Leisurely strollers may be unaware of runners or bicyclists approaching from behind and trying to pass on the left. Earbuds or headphones for music drown out the surroundings.

“We’ve gotten complaints, people out having a nice casual walk, they don’t hear the bicycles coming up” behind them, LHVA Executive Director Joseph Corcoran said. “This (line painting) might help” keep people to the right.

The Scranton section was paved in 2019 and is used in the Scranton Half Marathon, which hosts runners and walkers. But the half marathon did not take place as a live event in March because of the pandemic, and instead was held as a virtual competition over five days in October.

The line painting was supposed to occur earlier this year but was delayed by the pandemic, Corcoran said.

“This was just something that seemed to make sense all the way around,” Corcoran said. “Plus, it looks kind of nice and fits in with the half marathon.”

In Scranton, the trail also has become popular for dog walking, Worozbyt said.

Dogs are supposed to be kept on a 6-foot leash, but many owners use retractable 15- to 20-foot leashes, and some don’t leash their dogs at all. The dogs or extended leashes can get in the way of other trail users.