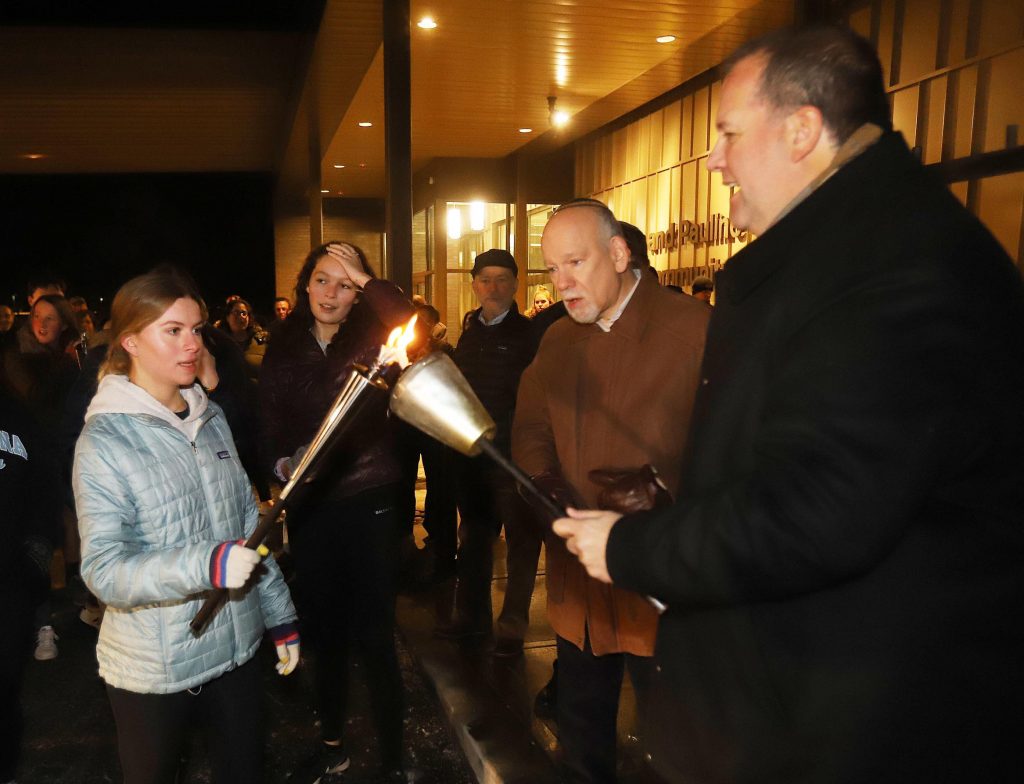 This year the route for the Mayrutz Halapid running of the torch switched directions, heading west from Wilkes-Barre across the Susquehanna River to the new Friedman Jewish Community Center in Kingston.

The local Jewish community has organized the torch run each year since the 1960s. It commemorates a tradition that originated in Israel in 1940, in which young men would run to distant cities to light public menorahs for Hanukkah.

Until this year, the runners started in Kingston and ended at the former JCC on South River Street in Wilkes-Barre. With the opening of the new JCC in Kingston this year, it was time to reverse the route for Sunday’s run.

“We are pleased to be here in this beautiful brand new building,” said David Schwager, a local attorney and a member of the JCC board of directors.

A large crowd waited outside the community center for the runners to arrive. Among them were Richard Shermanski and Michele Goldberg.

Shermanski, of Mountain Top, said they have been coming to the JCC for the torch run and the traditional Hanukkah dinner that follows it for the past 15 years.

“We enjoy it,” Shermanski said. “It’s the beginning of the holiday.”

Goldberg celebrated the start of Hanukkah, known as the Festival of Lights, by wearing a sweater that featured blinking menorah lights.

After the torch runners arrived, a large menorah was lighted to mark the first night of Hanukkah, a Jewish holiday celebrated for eight days and nights.

Hanukkah commemorates the victory of a small Jewish army that regained possession of the Holy Temple in Jerusalem in 165 B.C. at the time of the Maccabean Revolt. The Jews rededicated the temple and celebrated for eight days.

In the glow of the lighted menorah on Sunday, the torch runners, many of them young, celebrated their participation in the annual event that began decades before some of them were born.

Carla Weiss, of Dallas, took part in the run for the first time. Her friend Samantha Seeherman, of Wilkes-Barre, participated in her second torch run. Both said they would be back next year.

Menorah lightings will be held at the Friedman JCC for each of the eight nights of Hanukkah.