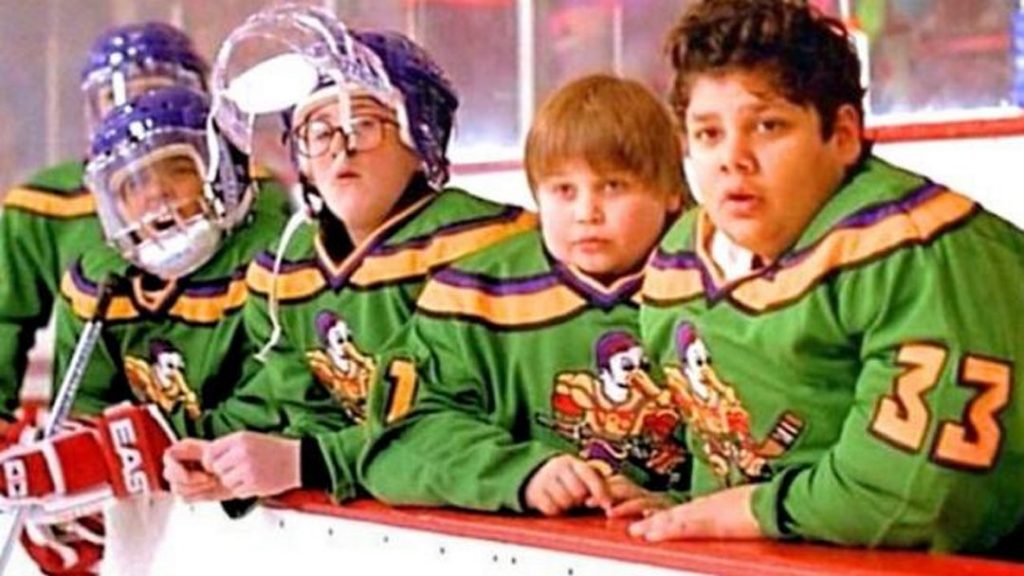 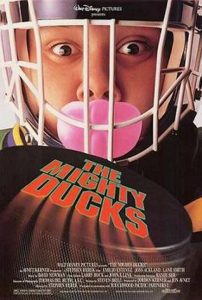 Sports movies are supposed to be fun, and I will admit, I find The Mighty Ducks fun. I’ve seen it many times and, with young kids, I’m sure I’ll see it many more. Who doesn’t enjoy Goldberg, the portly goalie who is afraid of the puck? Or Fulton Reid, the street tough with a heart of gold who, in three shots, scores one goal and breaks two panes of glass — every time? Every youth sports team has a Charlie (not Tommy, as my colleagues pointed out — although it was cool to remember my former college neighbor Tommy Conway) Conway, the kid who loves the game, who lives it and breathes it but who lacks that little bit of confidence he needs to get him over the top. I could identify with that, because in my own world then, I was Charlie Conway.

It’s what a kids’ sports movie should be. Silly. Inspiring. Inclusive. A testament to what working hard and believing in yourself can do for you. It’s over the top, but it’s still pretty identifiable, especially to those of us who remember that, back in the early 1990s, youth sports was different than it is now. It was the kids from your area, playing against the kids from the neighboring town. You were stuck with what you had, and that was OK, because what you had was your friends, and they were going to be your friends whether you won or lost or got roughed up by the Hawks. The Ducks were different genders, different races, different nationalities, and that wasn’t even a side story. It was the ultimate sports morale of the power togetherness. Until The Mighty Ducks was released, there wasn’t a movie like this for kids that centered around hockey, and I’m sure that, in some ways and in some places, it helped grow the sport.

Because every time I watch it, I spend an hour and 44 minutes rooting against the coach who made it all work.

What the writers of this movie want you to remember is the end. The Ducks in awesome uniforms, quacking in unison, rallying a loaded arena behind a bunch of early-teens trying to do the impossible. They want you to remember Gordon Bombay as the coach who inherited a group of talentless, directionless kids and turned them into league champs. 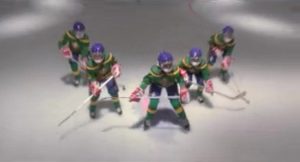 The Flying V, Gordon Bombay’s crowning strategic innovation as head coach of the Ducks, is illegal at any level of hockey. Center Jesse Hall is offside as he approaches the blue line.

But Bombay, played by Emilio Estevez, is everything a youth sports coach shouldn’t be, and winning the league against all odds — and learning a little bit of a lesson, perhaps — shouldn’t change that.

What the writers want you to kind of put out of your mind is the beginning, because this began the way too many youth sports movies do. Bombay is a hot-shot attorney in Minneapolis who is on a record win streak in the courtroom. To celebrate, he goes out boozing. Completely blitzed, he gets behind the wheel and attempts to drive home. Bombay may later in the movie fool Coach Reilly with the Flying V, but he doesn’t get this one past Minneapolis’ finest.

He is, rightfully, charged with a DUI. He is sentenced to 500 hours of community service, and that turns out to be — you guessed it — coaching the youth hockey team from District 5. Bombay’s boss at the law firm, Gerald Ducksworth, thinks its a good idea for Bombay to learn what it’s like to give back, be selfless, to learn “fair play.” Ducksworth later agrees to sponsor the team.

Bombay is reminiscent of another former youth sports coach put in a similar position: Morris Buttermaker from the 1976 classic The Bad News Bears. Buttermaker is a former athlete who had a drinking problem, gets cast into a position he doesn’t want to be in to pay off some kind of debt, and is given an absolute band of misfits with which to work. The difference between the two, though, is critical at this point: Buttermaker is a sad, lonely, down-on-his luck guy who, rough around the edges as he is, has to learn to be a better man and build a relationship with his daughter as he goes along.

Bombay is just a guy who should know better from the start.

Hans, the sage equipment store owner who knew Bombay from his own playing days, gets Gordon to open up about his feelings. He was a star player for Coach Reilly and the Hawks about 20 years earlier. He missed a key penalty shot, his patented triple-deke clanging off the post. The Hawks would go on to lose, and Reilly would forever blame Bombay for the rare season in which he didn’t win a title. Bombay’s father died around that time, too, compounding his separation from the game.

At this point in his life, Bombay is lucky he has a job, and he got off cheaply enough on the DUI charge with the community service. He’s not picking trash up on the side of the road; he’s coaching kids a sport he could really play. And, he — maybe better than most — understands what an understanding coach means to kids who sure could use one.

First meeting with the team, Bombay rallies the troops by stating a few facts: “Here’s the long and short of it: I hate hockey, and I don’t like kids.”

“I’m sure this will be a real bonding experience,” he went on. “One day, maybe one of you will write a book about it in jail.”

For most of the movie, these kids were better off with no coach. Bombay’s real interest here was running down those 500 hours of community service so he could go back to getting tax cheats and the like out of their debt to society. But, it still seems like he took the worst lessons from that experience with the Hawks in the championship game: Win, at all costs.

In their first game with Bombay on the bench, District 5 gets brutalized by the Hawks.

“You guys stink,” he surmises, to their faces. “I thought we came here to play hockey.

“You didn’t listen to a word I said. I said keep your heads up, you put your heads down. I said hustle, you went slower. That was the sloppiest playing I’ve ever seen. Why in the hell don’t you just listen to me?”

“Why the hell should we?” Jesse Hall, the team’s first-liner and should-be captain retaliated, before walking off the bench.

And of course, that got Bombay to look deep within himself and…

No. He whined some more about how bad they were.

“I don’t care. Wanna lose? Fine,” Bombay concluded. “You’re the ones who look like idiots out there.”

A few days pass. Rejuvenated, Bombay gets them back on the ice for their next practice and begins teaching the fundamentals of hockey and the value of…

No. He teaches them how to flop and draw penalties. These “idiots,” he seems to determine, only have a chance on the man advantage. Of course, they lose their next game, and Bombay rips into Conway for having some character and refusing to take a dive.

Sure, Bombay did some cool things for the kids. He convinced Ducksworth to make a Steinbrenner-like investment into the team, providing them better equipment and ice time and the unis. He convinced Reid to join the team (although he farmed out the responsibility of teaching him how to skate to the kids on the team). He found the figure-skating Duncans, Tommy and Tammy, and gave the team two of its better skaters. He even took them to a North Stars game and introduced them to Mike Modano, at some point. 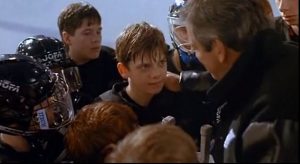 Oh, and he absolutely used the league’s best player — by all accounts a good kid named Adam Banks — as a pawn in his game to get back at Reilly.

Turns out, all but two worst teams in the league make the playoffs, and one team — the Panthers — had to forfeit due to a measles outbreak within the team. The winless Ducks only had to beat the one-win Huskies in the season finale to earn a playoff berth. This piqued Bombay’s interest.

Hans, who like Bombay should have known better from the start, then brought to Bombay’s attention that district lines had been redrawn before the season. Banks, who had been starring for the prestigious and unbeaten Hawks, technically lived just inside the District 5 border. He should be playing for the Ducks.

Bombay brings this to the attention of the league, and then flaunts it in the face of Reilly and Banks’ father. It’s supposed to be a major “in your face” moment to Reilly, who plays the story’s villain to a tee. But in this instance, you almost feel…sorry for him. He’s surprised by the news when Bombay delivers it, which means he clearly wasn’t flaunting the rules. He simply thought Banks was living in his district. Bombay is insistent that Banks either plays for the Ducks, or he doesn’t play at all.

In this case, the Hawks were four games better than the rest of the league, if you believe Hans’ standings. Banks was playing with his buddies, having a good time, learning the game. The Ducks were being taught, by Bombay, to cheat. This is a league oversight, and shame on Hans for holding that information until the playoffs. But shame on Bombay for not understanding the most fair way out of this for all involved — this story is about “learning fair play,” right? — was to allow Banks to finish the season with the Hawks and then play for the Ducks the following season. Gordon wanted to win, though, and he knew Herb Brooks couldn’t have led the Ducks past the Hawks without Banks if he had them doing six months worth of Herbies with Craig Patrick at the Olympic Training Center. So, he found turning Banks’ life upside down to be somewhat noble.

Bombay was such a terrible coach, Hall overheard him telling Reilly that the Ducks “didn’t deserve to live” in light of the forced transfer of Banks. In Bombay’s defense, it was sarcastic. But even as this team made the playoffs, it was difficult to ignore the fact this team didn’t trust him.

It all worked out, and Bombay somehow got to be the hero (and got an AHL tryout as a 30-something who hated hockey 500 hours earlier). He got the Ducks playing as a team, he trusted Conway to make the penalty shot in the championship game — probably because he wanted to date his mother, but I’ll give him the benefit of the doubt — and he became somewhat of a mentor. But the means don’t always justify the end.

Maybe, this experience will change Gordon Bombay long-term, for the better.

Don’t bet on that, though.

This one is to be continued…