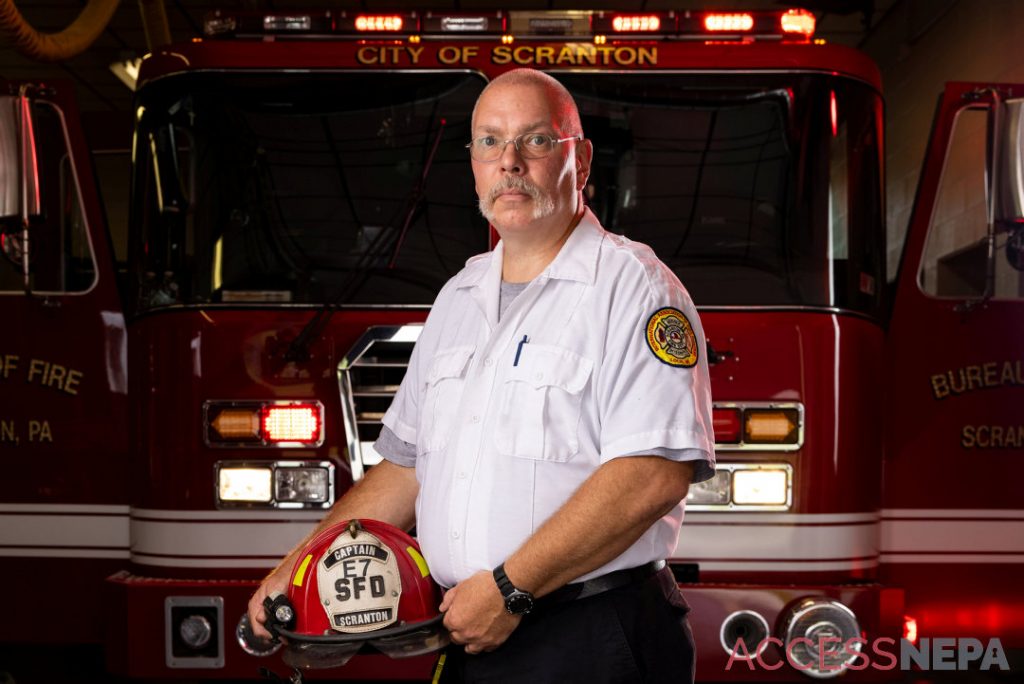 Bright red trucks, screaming sirens and flashing lights draw attention to firefighters every time they hit the road. And now, a new photography exhibit aims to put names to the faces of those men and women on board — a group that risks its lives to help others on their worst days.

Christopher Dolan, one of The Times-Tribune’s staff photographers, will display his images of Scranton firefighters in an exhibit during September’s First Friday Art Walk. The public can view the images on Sept. 3 at the fire department’s headquarters, 518 Mulberry St. The art walk runs from 6 to 9 p.m. at several downtown venues.

Dolan was inspired to put together the exhibit after accompanying firefighters on a training exercise in March. He enjoyed the experience and knew he wanted to do something else with them. In the meantime, he came across a book by a man who had visited fire stations across the country. The idea for an exhibit came together, and Dolan got the OK from fire department leadership to go ahead with the project, which he believes spotlights people who don’t get the recognition they deserve.

“When they were doing their training, I was inside of the building with them,” Dolan said. “You see stuff that nobody else can see. When they’re on a call … you’re standing outside watching them taking hoses in, breaking windows, but you don’t see what the actual work of a firefighter is because it’s all going on in the inside.”

Fire Chief John Judge said they were excited to showcase the department and thankful for Dolan for putting them in the spotlight.

“Obviously we have had a long and storied history, being part of this community for a long time now, and we were excited to be a part of (the exhibit),” Judge said.

Dolan wanted to include at least one firefighter from each of Scranton’s eight companies in the exhibit and worked with department leadership to come up with a list of potential subjects.

“I wanted specific people, so everybody in the project (is) there for a reason,” he said.

The group includes Caroline Janczak, the department’s only woman member, and two men who were sworn into service at the same time as Stephen Sunday, a 28-year-old firefighter who died from COVID-19 in December.

“I know that that was a big loss for them because they’re constantly doing something in his memory,” Dolan said.

The fire department also has a lot of “legacy families,” in which generations have served at city stations, he added. Even retired firefighters are represented in his show.

Dolan came across one of the firefighters by accident while covering a brush fire for the newspaper. The man, Kelly Hopkins, started laughing and posing while Dolan shot his picture. Dolan thought he seemed “like the coolest guy” and knew he had to have him in the project.

“These people, they go to work every day and they don’t know what they’re getting into,” he said. “Going to alarms or something that turns out to be nothing, or it could be a dangerous day. I think it’s kind of a profound thing how these people sign up to do this job not knowing what could happen and knowing how dangerous it could be.”

That danger was never more apparent than on 9/11, when 343 New York City firefighters died trying to battle the blazes at the World Trade Center. Dolan’s exhibit comes the week before the 20th anniversary of the attacks.

Interest in the work of first responders is apparent on social media, with several Facebook pages dedicated to sharing information about local emergency calls. And Dolan hopes to also draw attention to the plight of local volunteer fire companies.

Through his time photographing Scranton’s firefighters, Dolan gained a deeper respect for how selfless the group is.

Judge said it will be pretty cool to host the exhibit in its oldest fire station, which was built in 1905 and often attracts firefighters from elsewhere who stop by and check it out.

“It’s a pretty neat building to be able to see,” he said.

The firefighters are proud of the jobs they do, Judge said, and he expects the exhibit to put a face on the department for the community.

“They see us out mitigating emergencies on a regular basis and trying to help the community the best we can when they’re in their time of need,” he said. “Hopefully they’ll take away that these are real people that live and reside and do good things in the community.”