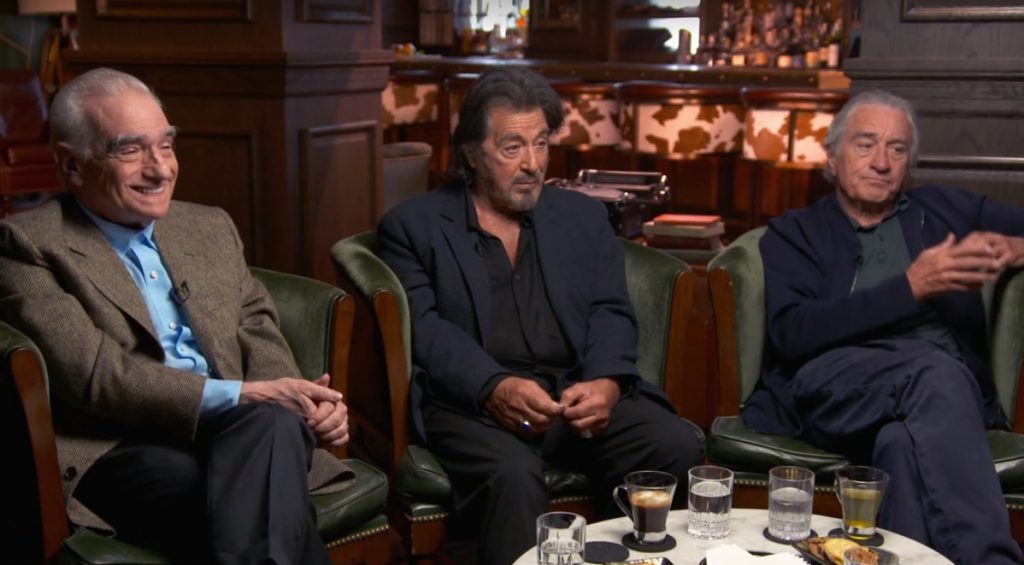 ‘The Irishman’ stars chat about film

With “The Irishman” set to arrive on the big screen in just a couple weeks, the cast has been making the rounds on talk shows to chat about the new movie.

Robert De Niro appeared on BBC America’s “The Graham Norton Show” on Friday, sharing how he encouraged Joe Pesci to join the cast and discussing the process in which the characters were digitally de-aged to allow the story to span decades. Watch the full episode here.

Also over the weekend, De Niro along with director Martin Scorsese and costar Al Pacino appeared on “CBS Sunday Morning” (watch the segment below).

“The Irishman” is based on Charles Brandt’s book “I Heard You Paint Houses,” in which former mob hitman Frank “The Irishman” Sheeran claimed at the end of his life that he killed labor union leader Jimmy Hoffa in 1975 on orders from Kingston-based Mafia don Russell Bufalino. Supposedly, Bufalino gave the order at a restaurant in Old Forge.

The film also stars Pacino as Hoffa and Joe Pesci as Bufalino, who died at 91 in 1994 at Nesbitt Memorial Hospital in Kingston and is buried in Denison Cemetery in Forty Fort.

The film will get a limited theatrical release on Friday, Nov. 1, with the Dietrich Theater, 60 E. Tioga St., Tunkhannock, planning to show the film locally. The move then will stream on Netflix starting Wednesday, Nov. 27, the day before Thanksgiving.

Watch the full trailer and teaser trailer below.