In 2011, a new, young cast of X-Men helped save the franchise and in 2014 it reached its pinnacle. However, with the exception of spinoff films such as “Logan” (2017), “Deadpool” (2016) and “Deadpool 2” (2018), the X-Men franchise went into a tailspin as it carried over poor plot points and focused less and less on the characters.

“Dark Phoenix” brings in that baggage from the previous films. Since Fox rebooted the franchise with “X-Men: First Class” (2011), the movies failed to sell Jennifer Lawrence as Mystique. That probably has a little to do with how great Rebecca Romijn was as the character in the original trilogy, but mostly the newest films don’t devote the necessary time to Mystique.

“X-Men: Days of Future Past” (2014) spends most of the run time telling the audience Mystique is a villain or at least someone the protagonists have to stop. In the last five minutes, she turns into the hero who saves the relationship between humans and mutants.

In the next film, “X-Men: Apocalypse” (2016), this character who went rogue is now, once again, the key to the team’s success. She needs to lead.

In “Dark Phoenix,” Mystique embraces her role and has more of a pulse of the students at Xavier’s School for Gifted Youngsters than Professor X. The transition is not smooth. Also, she is still uncomfortable at times to be seen in her blue skin.

It is so far of a departure from Romijn’s portrayal in the original trilogy. That Mystique remained in her blue skin unless she needed to shapeshift as a tactical move. She is a hero for those who feel like outsiders. In “X2: X-Men United” (2003), Nightcrawler asks Mystique:

Nightcrawler: “Why not stay in disguise all the time, ya know? Look like everyone else?”

Mystique: “Because we shouldn’t have to.”

Mystique is also a loyal follower of Magneto in the original trilogy.

From follower to leader; from a champion for the outsider to a woman still uncomfortable being around children in her natural form 30 years after the events of the first film. 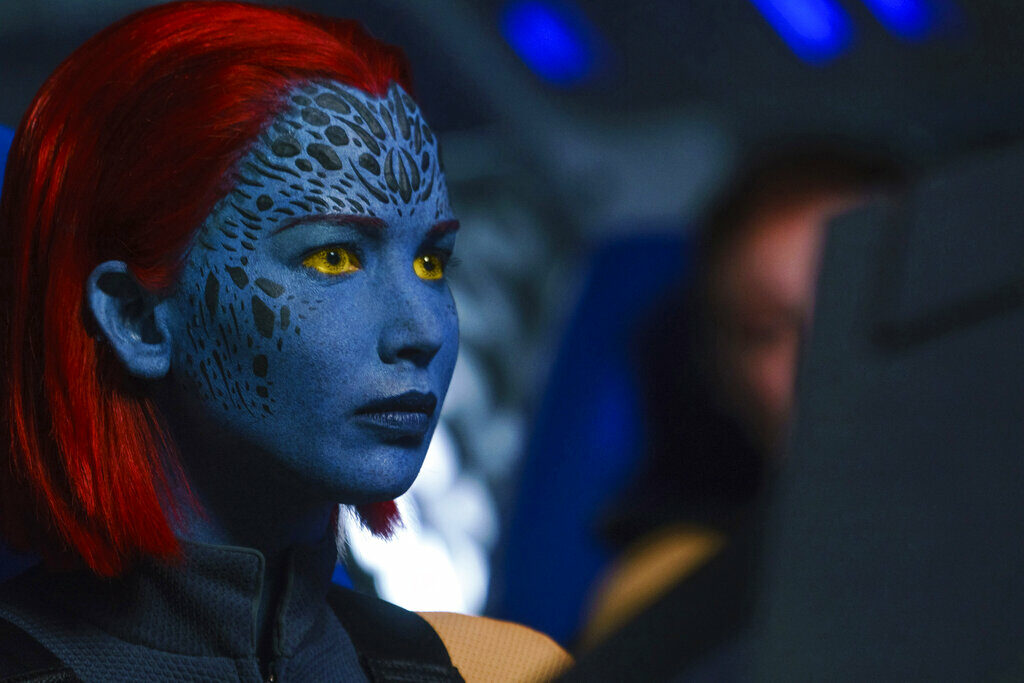 With such a drastic difference between the Romijn and Lawrence portrayals, the rebooted franchise needed to thoroughly explore Mystique to sell the audience on the change. There is no problem with the arc the writers chose, but the newer films just tell the moviegoer how to feel about the character instead of showing the audience. Therefore, anything important that directly involves Mystique won’t have the desired impact.

“Dark Phoenix” also brought some baggage from its trailer, which spoils a major plot point. The audience also has at least a basic understanding of the Phoenix storyline from “X-Men: The Last Stand” (2006). So the rising action and the scene the moviegoer knows is coming happens about 30 minutes into the film, rendering everything before that pointless.

The movie also took on reshoots, pushed back release dates and a pending merger with Disney, which made “Dark Phoenix” the final X-Men film with 20th Century Fox flying solo.

It was impossible for “Dark Phoenix” to succeed, but writer and director Simon Kinberg didn’t do much to right the ship.

“Dark Phoenix” conveys the theme that emotion is a strength, not a weakness. That’s a great plot point to delve into and prevalent in society, but it fails to explore the idea. Again, the film just tells the audience.

Some great actors do their best to elevate the dialogue, but can’t salvage the poor script. Michael Fassbender as Erik Lehnsherr/Magneto and James McAvoy as Charles Xavier/Professor X will always be a joy, but even they struggle. “Dark Phoenix” wastes Jessica Chastain, one of the best actresses in Hollywood, as she portrays a villain with the emotional range of a robot. The script hits Nicholas Hoult’s Hank McCoy/Beast the hardest as some of his serious lines prove laughable. The screenplay also forces Lawrence to say a line about how the X-Men should be called X-Women, which comes out of nowhere and holds no weight.

While all fail to elevate the dialogue, Sophie Turner also struggles to hide her British accent. She portrays Jean Grey/Phoenix, but she often starts to slip back into Sansa Stark.

Also, for a movie called “Dark Phoenix,” it doesn’t devote a lot of time to its title character. The cast is spread so thin with no time to develop much of anything. The villains walk into the film with no explanation as to who or what they are, but if the movie doesn’t care, why should the audience? Without the development of these characters, the impact of a death or the threat of danger is lost. The viewer can’t invest, can’t be moved emotionally. And that’s what this movie did. The characters were sold to the audience as people with mutant abilities. Nothing more.

“Dark Phoenix” picks up with a solid train action sequence, but with a few ruthless kills delivered from a few supposedly good X-Men characters, even that can’t save the lifeless film.

“Dark Phoenix” is a disappointing end to a once great iteration of the franchise. It took the low bar “X-Men: The Last Stand” set and found a way to crawl under it. Now, Disney has to clean up another studio’s mess.

When “X-Men” brought Marvel Comics’ popular mutants to life on the big screen in 2000, the landmark film ushered in the modern wave of comic book movies. The groundbreaking franchise spawned its own cinematic universe across 12 films.

But with this year’s Disney-Fox merger, the era of the X-Men unceremoniously comes to an end with “Dark Phoenix,” the franchise’s second take on the iconic Dark Phoenix Saga storyline from the comics.

The film, the seventh in the main X-Men movies, partially rights the wrongs of past movies in the inconsistent franchise. But rather than ending the series on a high or low, “Dark Phoenix” just ends, leaving fans to ponder what could have been.

Spiraling out of control, Jean accidentally kills someone close to her. As her growing instability threatens the world, the X-Men become divided on whether to help or kill Jean. Xavier, believing Jean can be saved, is joined by her boyfriend Cyclops (Tye Sheridan), the weather-controlling Storm (Alexandra Shipp) and the teleporting Nightcrawler (Kodi Smit-McPhee). Viewing Jean as a threat are the grieving Hank McCoy/Beast (Nicholas Hoult) and the enraged Magneto (Michael Fassbender).

In 2006, “X-Men: The Last Stand” mangled the Dark Phoenix Saga, shoehorning it in as one of its many plotlines. But “Dark Phoenix” focuses squarely on Jean’s transformation from well-adjusted mutant to an unstoppable force of nature. The fantastic Turner delivers a sympathetic performance as she taps into Jean’s pain and rage. But though the movie gets into Jean’s head, the script doesn’t devote enough time to her struggle.

For much of the film, Jean lacks agency as she is used as a pawn in a tug-of-war between Xavier, who is worried about maintaining good PR, and Vuk (Jessica Chastain), an enigmatic alien who seeks to use the Phoenix force for her own benefit. During the final act, the film grabs onto a message about finding empowerment through emotions. It’s a great message, but it would have been more effective if the rest of the film had delved more into it.

“Dark Phoenix” operates on a smaller scale than its predecessor, 2016’s bloated “X-Men: Apocalypse.” The film features less action, which backfires as its first two acts border on dull. Under first-time director Simon Kinberg, the death of a major character – which was spoiled in a trailer for the film – lacks the gut punch it should have drawn from moviegoers.

However, the film gets new life during its third act, which was reshot to avoid similarities with other comic book films. The thrilling train sequence and the climactic battle that follows deliver the burst of energy missing from the film up to this point.

While “The Last Stand” and “Apocalypse” overloaded their casts with too many characters, “Dark Phoenix” keeps the count down to its core group. This allows for great performances from McAvoy and Fassbender as Xavier and Magneto, the best of frenemies. While she may have been going through the motions in “Apocalypse,” Lawrence brings emotion and weight as Mystique. But the script fails in making Chastain’s villain anything but annoying. Vuk is more head-scratching than threatening, a waste of the actress’ talent.

The X-Men films have run the gamut from excellent to awful, and “Dark Phoenix” ultimately comes out middling. Though an improvement over “The Last Stand,” the X-Men’s swan song is a mixed bag that doesn’t feel like an end – much less a fitting one – for the influential franchise.