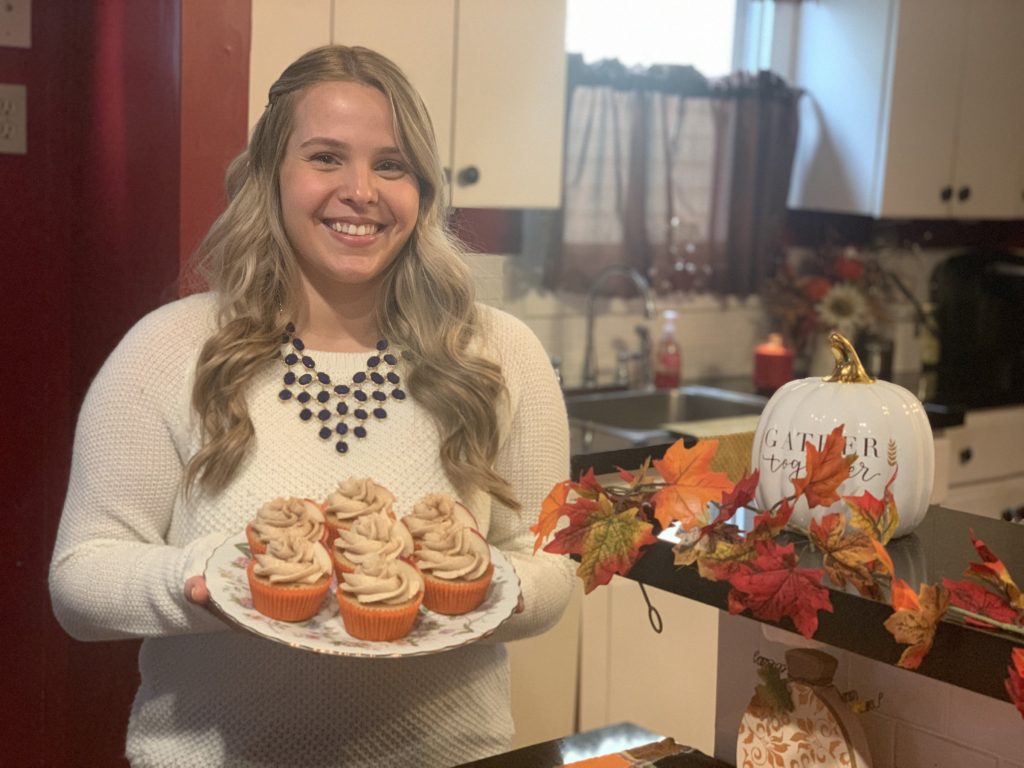 Nothing beats the flavors of fall — except maybe when it’s in a cupcake.

Kayla Occhipinti’s Apple Cider Cupcakes hold all the tastes of the season in a sweet treat. The Dickson City resident has always loved to bake and find recipes online that she can make her own. A fall lover, Occhipinti stumbled upon the apple recipe while looking for a dessert that would taste as festive as it looked. The cupcakes — which earned Occhipinti a $50 gift card for Riccardo’s Market, 1219 Wheeler Ave., Dunmore — also are topped with a homemade buttercream frosting.

“These really are perfect for the season,” she said during a recent afternoon.

“You can sprinkle them with cinnamon and sugar, drizzle with a little caramel or add a little apple slice,” she said. “It’s completely up to your preference and taste.”

It’s no surprise Occhipinti is a skilled baker, thanks to the time she spent as a little girl in the kitchen with her mom, Carol Occhipinti; her grandmothers, Maryann Nykaza and Francis Occhipinti; and her aunt, Karen Occhipinti. While with her aunt (whom she affectionately refers to as “TeeWee”), Occhipinti said the two would create all different kinds of goodies and even make homemade frosting.

“Any time we were together, she would say, ‘How about we bake?’ instead of watching TV or something else,” Occhipinti said. “She’s the reason why I love it so much.”
The rest of her family — including her dad, John; brother, John Michael; and her twin, Kelsey — love to be in the kitchen, too, thanks to their Polish and Italian heritages. Cooking and baking are big traditions around the holidays, though Occhipinti said they enjoy them year-round.

The Midvalley woman has always gravitated toward creative work such as painting and other forms of art, and baking fills that same need. By day, Occhipinti works in the floral department of Wegmans, and in her spare time, she dreams up sweet creations including homemade pies, Chocolate Walnut Banana Bread, Candy Corn Unicorn Cupcakes, Lucky Charms Doughnuts and more. Occhipinti frequently shows off her baking creations on her Instagram account, @thegypsybaker_11, and also has started to turn her love of baking into a business. She makes treats for family and friends and customers who find her work on social media.

“It’s not a job to me to get to bake and just create,” she said. “I love to make people happy, and when they see a tray of cupcakes, they can’t help but smile. That’s the best feeling, and that’s why I love baking.” 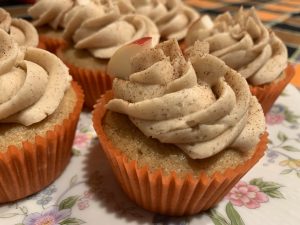 Cream together butter and sugar in a bowl. Add eggs one at a time, then add vanilla and mix until fully incorporated.
Alternate between adding the apple cider and the mixture of dry ingredients to the wet mixture, slowly mixing them.
Line muffin tin with cupcake liners. Fill cupcake liners 2/3 full and bake at 350 F for 17 to 19 minutes, until toothpick inserted through center comes out clean. Let cool completely before frosting.

Whip together butter, brown sugar, cinnamon and vanilla until light and fluffy. Gradually add powdered sugar and mix until incorporated. Add milk until you reach desired consistency. Transfer to piping bag and frost cupcakes once they have cooled. Garnish with an apple slice, cinnamon and sugar if desired.