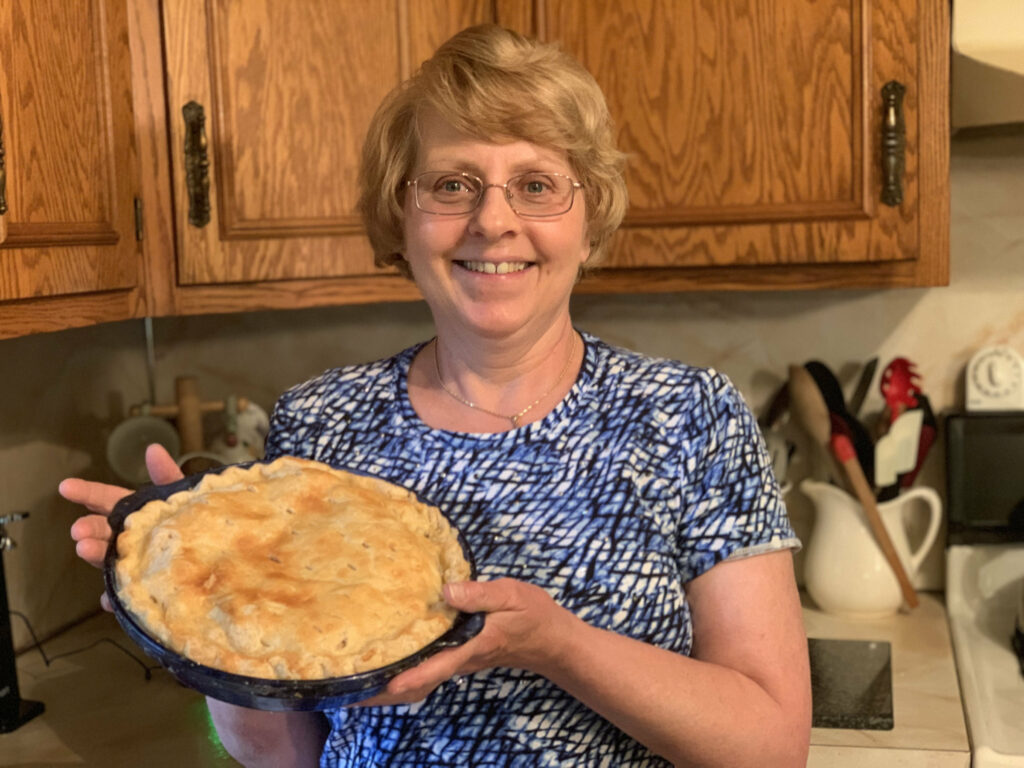 Here at Local Flavor, we think cookbooks are the best kinds of books.

A group at Valley Community Library in Peckville thinks so, too.

The Midvalley branch of Lackawanna County Library System hosts a Cookbook Club each month to swap recipes and share ideas. The class tries a lot of different recipes, so when group members opted to each bring in their best dish, Janet Kosydar’s was a no-brainer: her Apple Pie.

Her take on the American classic earned the library’s Cookbook Club a $50 grocery gift card through Local Flavor Gives Back.

The Dickson City resident received the recipe from her mom, the late Veronica Bednarczyk. While she helped out in the kitchen as a kid, Kosydar began to make the pie herself when she married her late husband, Larry, in 1976. It remained a staple while their three children, Lauren, Marissa and Larry, were growing up.

“I’ve been making it for so long, I’ve really perfected it and got it down,” Kosydar said. “This is my best.”

Kosydar said her recipe for Apple Pie is straight-forward, but has a few key steps to ensure it’s perfect. She typically uses three Granny Smith apples and one Cortland apple for the filling and cuts them into 1/4-inch thick slices.

“I don’t like thin apple slices — I love a little bite,” she said.

As per her mother, Kosydar only uses ice cold water and cold Crisco for the crust, which she swears gives the pie it’s flaky, melt-in-your-mouth consistency.

“My mother always did it so I never questioned it,” she said, laughing. “This was what she said to do and it always comes out good.”

Kosydar’s Apple Pie was a slice of heaven. The apples tasted crisp, sweet and tart with just the right hint of sugar and spices. The filling was enclosed in a flaky, buttery crust.

The delicious Apple Pie should come as no surprise as Kosydar is an accomplished cook and baker. From cookies and cakes to Sunday-style dinners and Polish delicacies, Kosydar’s kitchen prowess knows no bounds. Today, the grandmother of six — Ella, 11; Lucas, 5; Landon, 5; Owen, 4; Ellie, 2; and Mia, 1 — is always looking for different recipes to try. The Cookbook Club has helped her explore new ingredients and dishes that yield delicious results.

“I’ve made a lot of new things I would have never even thought to try,” she said. “That’s the fun part. Eating it is good, too.”

Directions: Blend flour, salt and Crisco with pastry blender. Add water. Mix to form dough. Roll out and separate into two halves. Place one half in a 9-inch pie plate. Set aside second half for top crust.

Ingredients: Mix together apples, sugar, tapioca, cinnamon, salt and nutmeg in a small bowl. Layer half of sliced apples mixture in pie plate and cover with cinnamon and sugar. Repeat with the second layer. Add a few drops of lemon juice and tablespoons of butter, cut into small chunks, over top layer of sugar. Cover with top crust and flute edges. Brush top crust with milk and slash top crust to allow steam to escape. Bake at 425 degrees F for 25 minutes, then reduce heat to 350 degrees F and bake 20 minutes.