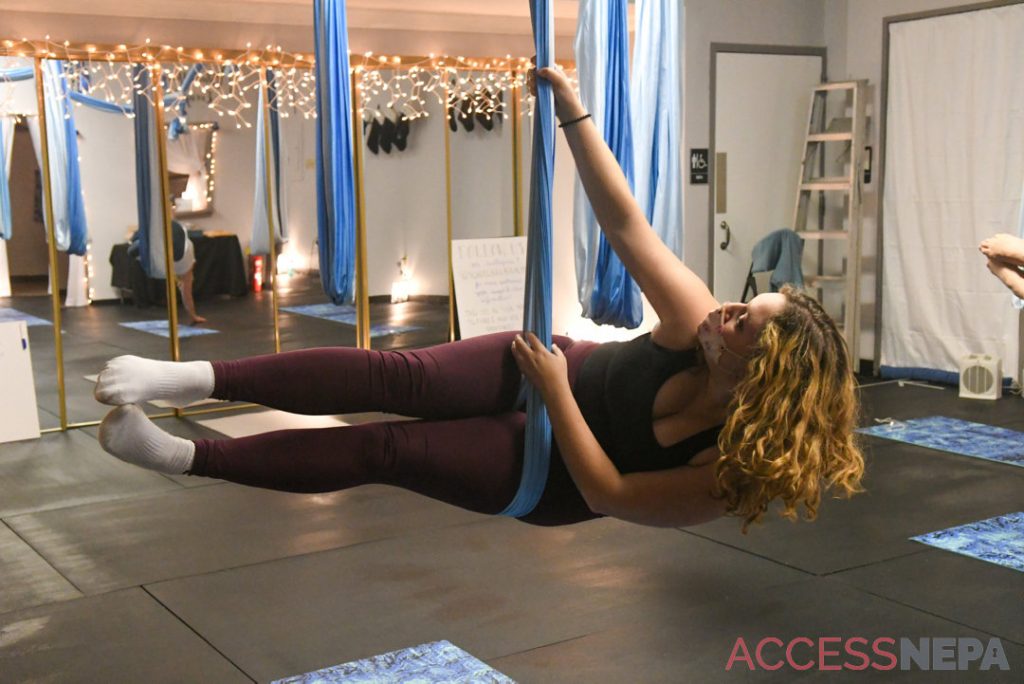 Sharon Klinger has loved fitness since she was a child, taking dance classes and watching Olympic gymnasts on TV. But not even she ever suspected that she would be taking fitness to a whole new level — the sky.

Klinger founded Pottsville’s Schuylkill Aerial and Wellness in September 2019 with her husband, Byrd, at the site of the former Trailways Bus Station on East Norwegian Street. It is the first (and so far only) aerial yoga studio in Schuylkill County, but that’s not the only thing that makes it unique; there’s also the hammocks. Fitness classes at Schuylkill Aerial and Wellness use hammocks, not for lazing around, but for yoga, Pilates and other activities.

“You get the best stretch using a hammock,” Klinger said. “When you hang upside down, you elongate and decompress the spine, which can be very therapeutic. The hammock also challenges your balance like no other activity.”

Aerial yoga was developed in 2014 in California by Christopher Harrison, a former dancer and gymnast. With its goal of stretching, aerial yoga adds elements of Pilates and dance to traditional yoga poses, supplemented with a hammock so that people can hold the postures while hanging in the air.

Klinger first learned about aerial fitness from an online post in 2018, but was shocked to find that she lived 40 miles from the nearest studio.

“I loved it so much,” she said, “I insisted I had to bring it to Schuylkill County. I trained and was certified and opened as soon as I could. I have had a really great response to opening”

To be a registered aerial yoga teacher, Klinger had to take a six-day class with an expert. To be a bungee fitness expert, she trained for three days. 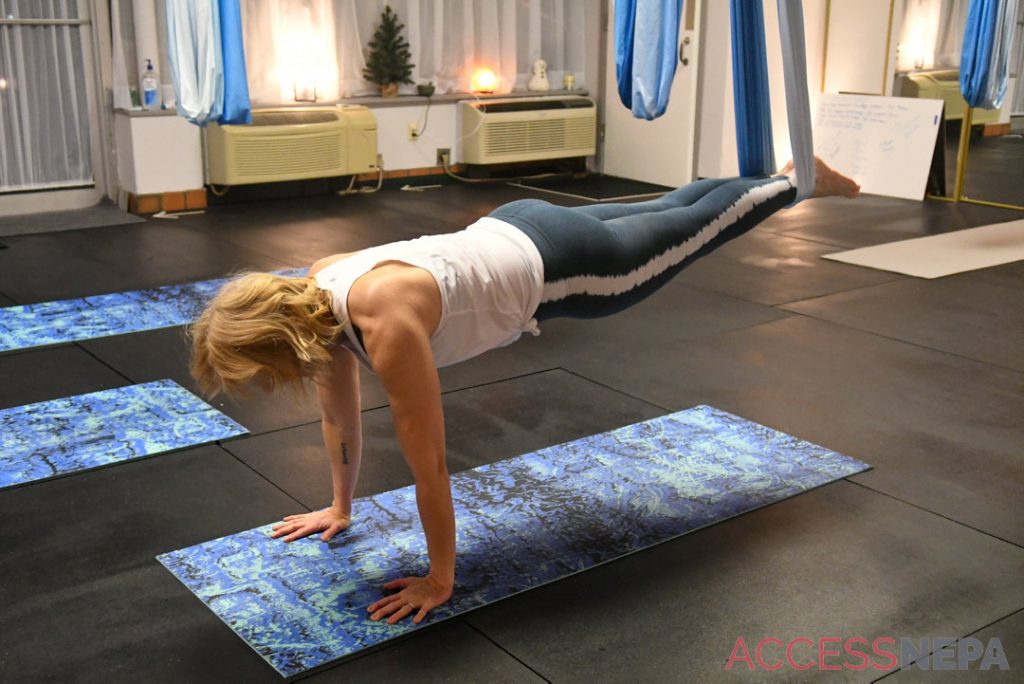 “I joined Sharon at her studio because I was very interested in trying aerial yoga and now it’s a passion of mine,” said Sequoia Gawlik, of New Ringgold, one of Klinger’s students. “I use those classes as self-care time. It really helps balance both your body and mind.”

Klinger planned to offer bungee fitness classes in May, but couldn’t due to COVID-19. Bungee fitness involves exercises, including jumping and bouncing, done while tied to a bungee cord.

Before the pandemic hit, business was doing well, but now she only has enough students to meet in person once a week at 6 p.m. Thursdays. In the meantime, Klinger plans to hold classes virtually. In the future, she wants to offer bungee fitness classes along with Zumba, Pilates and stress reduction classes. Attendance in December is usually small due to the holidays, but attendance skyrockets in January as people try to honor their New Year’s resolutions. Because of the pandemic, however, whether this will repeat in 2021 has yet to be seen.

Schuylkill Aerial and Wellness offers an open studio and beginner aerial hammock yoga classes for $12 a class, as well as private classes of up to six people for $75. Classes are beginner level having at least one foot on the ground at all times, except for an opportunity for an inversion and relaxing in the hammock at the end of class. Classes are one hour long and for all ages.

For more information on the classes, call 570-573-5932, visit schuylkillaerialandwellness.com or the studio’s Facebook page.