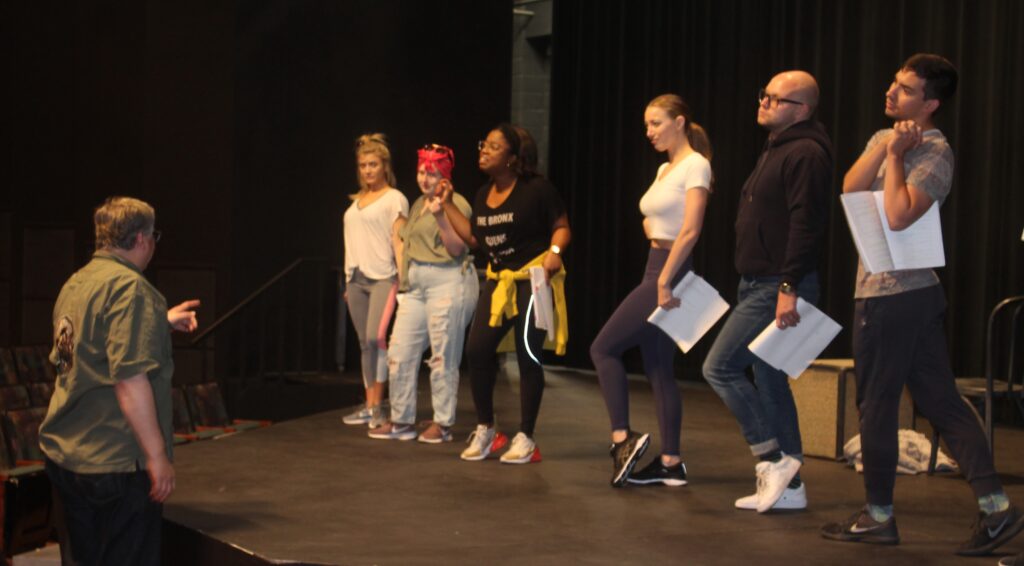 BY ROBERT L. BAKER The Scranton Shakespeare Festival takes a break from the old bard Wednesday, July 31, through Friday, Aug. 2, with a new play written and directed by Tony-nominated Douglas Carter Beane.
The sometimes Lake Carey resident brings “Behavior of Light’ to the Royal Theater at the University of Scranton in a story about the impermanence of life, even in small town Pennsylvania.
Set in a 1970s’ Reading that has seen its glory years, a seven-member cast share the story of a one-time school janitor whose life grows richer with fanciful outsider art nourished by his inner soul.
Although Teddy has an affinity for the school’s art teacher, that school gets transformed by small events around him, and the plot line follows the power of art and the need for creation in a world re-created around him.
Beane is a high energy guy, who during rehearsals Friday morning, sat in the audience studying his cast members’ movements and lines, and after two or three takes of the same scene, jumps on stage, showing the actors how to move across it and carry the audience through the play’s storyline.
They go through the scene one more time, and clearly the energy picks up.
After a 10-minute intermission, Beane returns to the stage with a box under his arm, and announces, “It’s Krimpets time.”
He opens a box of the TastyKakes, a century old Philadelphia tradition, which those who watch the play will understand the significance.
Beane is clearly comfortable with the cast and they with him.
Asked about what it’s like to see a new cast perform his work – ‘Behavior of Light’ was completed in the spring of 2018 and first performed at Villanova in Philadelphia, he said, “It’s always exciting because you find that the seven big personalities out there will bring something to their role you hadn’t thought about, but clearly connects.”
“It’s pretty fun, actually,” Beane said, “because a lot of what I write is about the joy of performing.”
And the setting of this play, is it autobiographical?
“Well the middle school I attended as a kid did become condominiums, and I did think about it – change – as a dynamic,” he said matter-of-factly.
The summer resident of Lake Carey who likes to return for big holiday gatherings, also spends a bit of time in New York City, and a lot of time on the road directing his plays which could end up on Broadway as 10 or 12 of them have.
When ‘Behavior’ closes, Beane said it’s off to Sarasota, Fla., where he will be at the Asolo Theater directing ‘Hood,’ a fanciful version of the old Robin Hood story.
He also has a television series in the works, and this fall will be taking another play, ‘Big Time,’ to an American Academy of Dramatic Arts workshop at the McCarter Theater in Princeton University.
Across it all, Beane said, “It’s nice to know I still have a voice that people tune into.”
With a large segment of people binge movie watching and obsessed with their cell phones, is the handwriting on the wall for the stage?
“Not at all,” Beane said. “It has actually been helping. There is a tribal need to go to the theater and connect with an experience outside oneself.”
And the one big takeaway he hopes audiences will pull from ‘Behavior of Light?’
“That eventually the truth comes out,” he said. “Wherever you are politically or socially, it is inevitable and inescapable that truth will find its way out through art.”