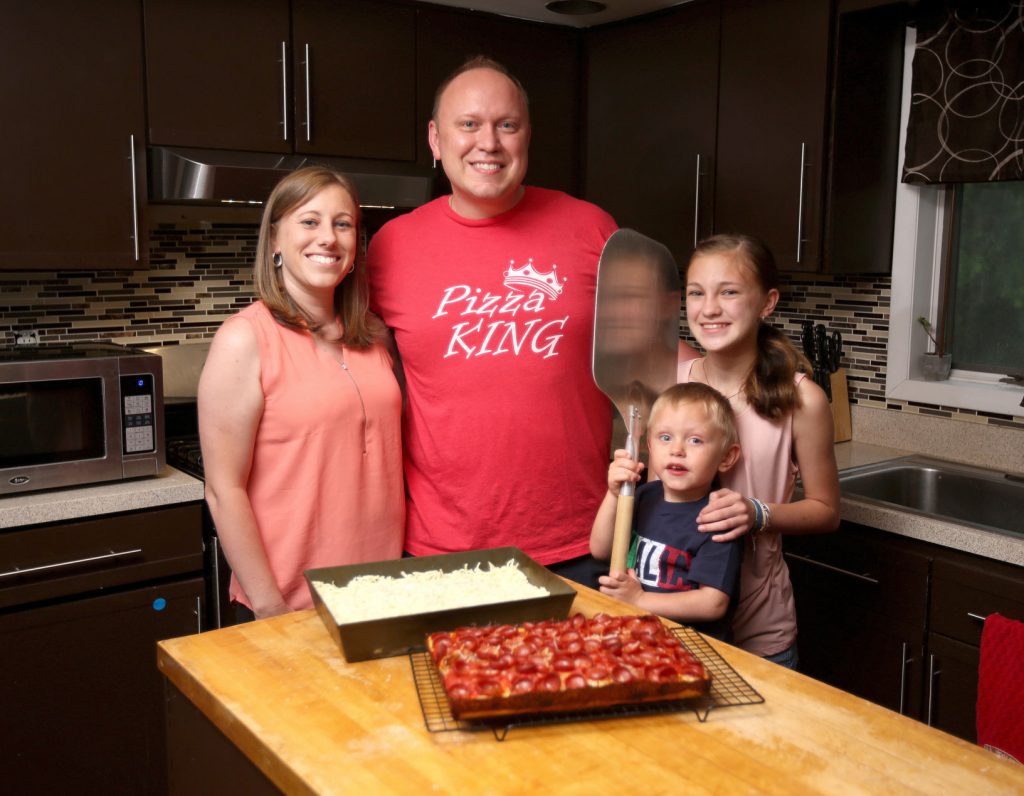 Jim Mirabelli found a way to blend his love of writing and sharing ideas with his passion for pizza.

The creator of NEPA Pizza Review, which he started in 2012, Mirabelli tastes pizza from across Northeast Pennsylvania and then reviews each cheesy bite through blogs and videos on his website, nepapizzareview.com; social media accounts and YouTube channel.

Also through his social media accounts, Mirabelli shares his own pizza creations. The Clarks Summit resident earned a $50 gift card to Riccardo’s Market, 1219 Wheeler Ave., Dunmore, for his Detroit-style pizza.

Thanks to a chef friend in Philly who coined the term, Mirabelli refers to it as “fancy cheesy crust” pizza. The moniker of the Detroit-style pizza refers to the Sicilian-like crust with cheese and then sauce on top as well as caramelized cheese on the edge of the pan.

The style of pizza also is super popular right now. While Mirabelli keeps an eye on every local pizza place, he also watches several pizzerias throughout the country and follows pizza trends. He has seen the Detroit-style trend grow over the past year.

Mirabelli noted that Detroit-style pizza may not be for everyone. Whether his audience might include Old Forge-style diehards or New York-style traditionalists, Mirabelli is always down for trying new and different kinds of pizza.

And the opinions that mean the most to him are those of his best taste-testers: his family. Daughter, Layla, a 13-year-old middle-schooler at Abington Heights, is an accomplished dancer who has starred in some of her own pizza review videos (“She has her own fans,” Mirabelli said) and can toss and twirl dough in the air like a pro. In between learning to drive his Power Wheels and getting ready to start preschool, 2-year-old son Jack loves to help his dad make pizza sauce and dough.

Mirabelli joked that his wife, Jaimie, a kindergarten teacher, is a saint for putting up with his pizza obsession for all of these years.

But as long as there’s pizza, Mirabelli has his purpose.

“I connect pizza with people,” he said. “That’s my tagline and pretty much sums it up.”

Divide dough into 3 18-ounce pieces and roll into smooth dough balls. Place in glass or plastic container that will accommodate the dough doubling in size. Cover with lid or plastic wrap and allow to rest at room temperature for 1 hour.

Remove from fridge and allow to rest at room temp for 1 hour before handling.

Gently press out and stretch dough on counter until it is roughly the size of the bottom of the pan. Place in pan. Cover and allow to raise at room temperature for 2 hours.

Mix shredded brick of cheese and shredded mozzarella. Cover dough with cheese, specifically placing a generous amount against side of pan to form an edge.

Raw toppings such as vegetables should be dried before adding.

Bake on middle shelf until cheese melts and begins to brown around edges (about 8 to 10 minutes).

Remove parbaked crust from oven and spoon stripes of sauce on top of cheese. Add toppings such as pepperoni.

Bake for an additional 7 to 10 minutes until cheese has fully caramelized and begins to pull away from pan. Use a spatula to free pizza from pan. Allow to rest on a cooling rack, cut and serve.