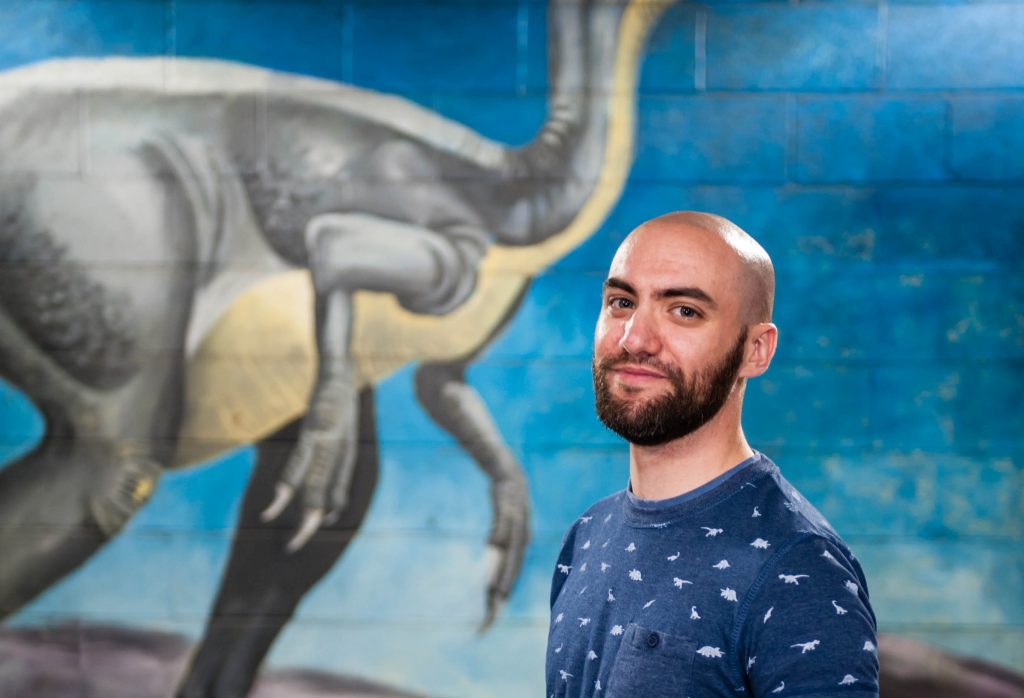 Pittston native digs his path to next chapter

Sam Chiarelli unearthed a future by exploring the past.

As with most kids, dinosaurs fascinated the Pittston native at a young age, when he’d marvel at creatures he that seem almost like real dragons. Although he grew up and pursued a career far from that field — he’s a digital marketer by day — he later found himself drawn back into prehistoric times while working on his master’s degree, becoming a published author with plans to release more books one day.

After earning a bachelor’s degree in English with minors in music and history from Wilkes University, Chiarelli returned to the campus to study in the creative writing program, where he started writing about dinosaurs in response to a prompt. A professor pulled him aside one day to recommend that he pursue that topic for his thesis.

That grew into the idea for a book, and seven years, a train trip out West, lots of research and numerous drafts later, Chiarelli’s book, ”Dig: A Personal Prehistoric Journey,” came out in November 2018.

“I had someone tell me that when you get this (book), you have to sit down with it and just take that moment in, because you’re never going to get to hold your first book again,” said Chiarelli, who now lives in Exeter. “It’s such an unbelievable experience to actually hold this thing when you’re done.”

The book follows Chiarelli on an Amtrak trip to a Colorado fossil dig in summer 2015 but also incorporates interviews with paleontologists and other professionals plus stops at museums, laboratories, theme parks and more. His book sought to answer specific questions: why do people who get so interested in dinosaurs, and why are there people like him “who don’t outgrow this thing?”

“I definitely think it has something to do with our imaginations, because every other group of animals that we hear about, we can kind of see,” Chiarelli said. “To think about a wooly mammoth, it’s extinct, but it’s basically (like) an elephant. … But there’s nothing quite like a sauropod dinosaur walking around today or a T. rex. That’s harder. And the only place that those animals really exist right now, other than the fossils, is in the human mind.”

As Chiarelli sees it, people tend to fall into specific categories when it comes to dinosaurs. It starts with people who get interested for a while before moving on to something new.

“(Then) there’s a small group of people, they’re into it for a few years,” Chiarelli said. “They’re the kids with the dinosaur T-shirts and the dinosaur socks. We all know those people.”

Another group maintains that fascination, he said, and those people tend to end up as paleontologists. And then there’s the group Chiarelli fell into: people who liked dinosaurs as a kid, fell out of it for a while and then renewed that interest later in life.

“I was just completely head over heels about dinosaurs (as a kid),” he said. “It was like I couldn’t get enough of it.”

Years in the making

While he felt excited to take the train trip, Chiarelli also describes himself as an “anxious traveler,” and it was a way for him to conquer his fears. His friend, Tim, came along and ended up as the “comic foil” in the book, and as they got used to the train, “it just became like home,” Chiarelli said.

“It was such an amazing way to travel,” he said. “We wanted to keep going. We were sad we had to turn around and come back. … There’s kind of this romance about that style of travel that I don’t know if people fully appreciate. Once you get out West and you’re in Colorado, just the scenery and the beauty of the landscape was breathtaking. I would definitely recommend (it) once people can travel (again) by train.

Out West, Chiarelli said, the timetables for the train weren’t as fixed as on the East Coast, so there were moments when trains might have to pull over for hours and wait for another to pass.

”You kind of lose all sense of time,” Chiarelli said. “You start waking up with the sun and going to sleep when it’s dark. It’s this really cool way of traveling.”

While the train trip was the focal point of the book, Chiarelli also took smaller side trips. He reached out to academics, scientists and people who had hosted documentaries — the “lifelong heroes” who left him “totally star-struck.” He expected many of them to would say no to this “no-name guy” from Pennsylvania, he said, but about 99% agreed to be interviewed and share their thoughts about dinosaur fandom or science.

“The most surprising thing (was) how willing people are to bring you into their world and share just mind-blowing facts with you,” Chiarelli said.

At first, Chiarelli didn’t know what he’d do with his finished book. Normally, authors pitch an idea, someone buys it, and then they write the book, but he wanted to write it first and then shop it around.

“My fear was that if I took it to some huge publisher, they would rip it apart,” he said. “For the first book, I want it to be exactly as I have it in my mind.”

He knew another Wilkes alum had an online magazine, Hippocampus, that specialized in creative nonfiction was accepting blind submissions to launch its publishing house. He entered “Dig,” and it ended up getting selected for publication. 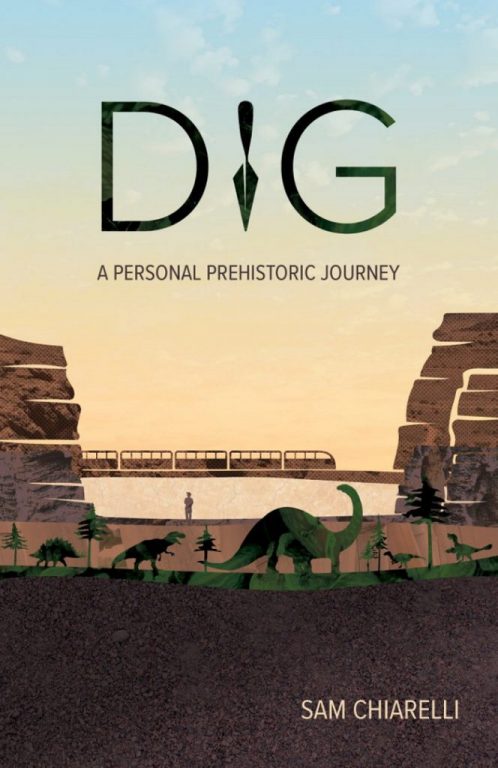 Chiarelli was involved in talks for the cover design and said he wanted it “to feel like an old album cover.”

”It came out absolutely incredible. There’s so many cool features in there,” he said, noting the person on the cover actually is a silhouette of him, and the different layers were created from pictures of gardens. “It makes it look like a really it’s kind of like a storybook feel.”

The reaction to “Dig” has been amazing, Chiarelli said.

“I expected to hear from dinosaur fans across the states, but it’s also been circulated worldwide, so there’s been some people reaching out from Indonesia and the United Kingdom, all different corners of the worlds,” he said. “(And) the book really resonated with them in terms of being fans of the whole dinosaur thing, not only the science but also the cultural aspect and the history of dinosaurs and people.”

The book earned positive reviews from the paleontological world, too. Steve Brusatte, a paleontologist at University of Edinburgh and a New York Times best-selling author, described the book as “’a prehistoric journey from the heart,” adding, “Chiarelli’s travelogue will awaken your inner child and make you fall in love with dinosaurs all over again.”

Roger Smith, publisher of DinosaurNews.org and GlobalMuseum.org, called the story “a fascinating insight into the mind and motivation of a man who is clearly in love with his subject; it is unlike any other dinosaur book I have read, and all the better for it.’’

Chiarelli has started on another dinosaur-related book that will involve working directly with a specific institution, although the pandemic “really threw a wrench in the gears” when it came to traveling and moving forward on the project. In the meantime, he continues to give presentations related to “Dig” and still hears from readers more than two years after its debut. These conversations leave him humbled and surprised.

“I think the best thing for me has been seeing (and) talking to people who aren’t dinosaur people necessarily, but they come to a talk or they write me a message online and they say, ‘The dinosaur thing was super interesting, but you got me really fired up about what I used to be passionate about,’ whether it was playing piano or hiking. … If I can play a small role in nudging people to pursue those passions that they may have put to the side, that’s really great for me,” Chiarelli said. “It’s really a privilege for me to help them do that.”