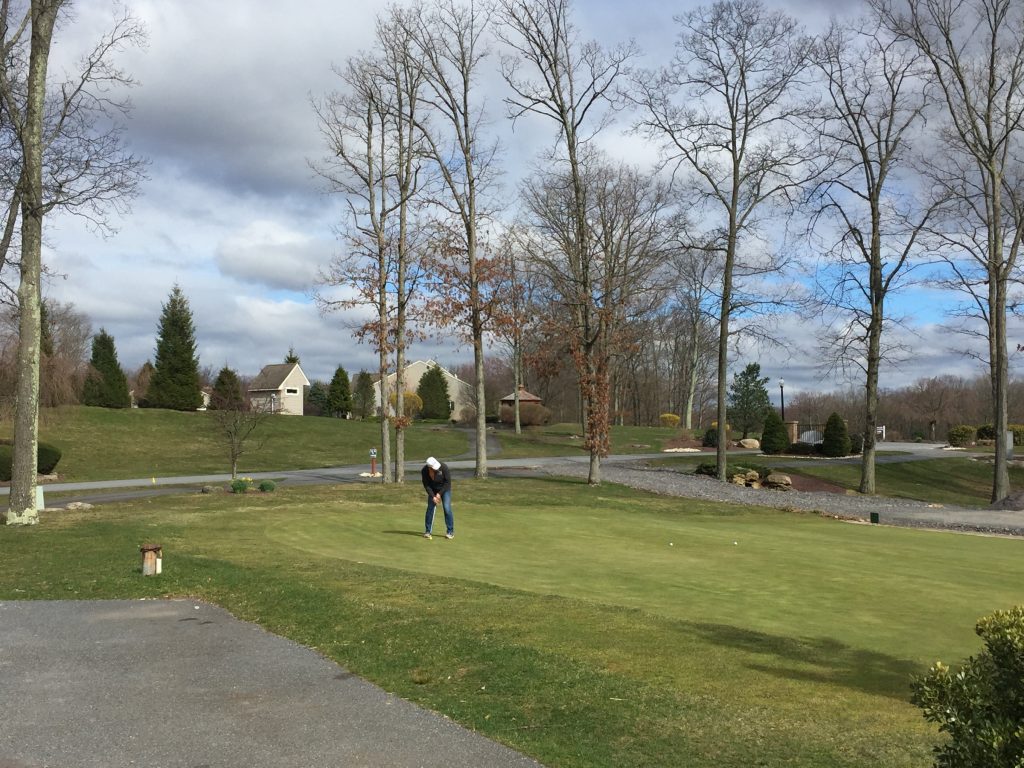 Pandemic has had huge impact on golf courses

A mild winter with little snow.

An early spring arrival, with warm temperatures and limited rainfall.

That combination had players flocking to courses in droves in early March, and the 2020 golf season here in Northeastern Pennsylvania was shaping up to be a record-breaker for area courses.

“We were open, and we were in line probably for one of our top five springs that we’ve had in 22 years, that’s how busy we were,” said Tony Barletta, Director of Golf at Blue Ridge Trail Golf Club near Mountain Top. “Our opening day was March 4, which was a Wednesday, and we were very busy right out of the chute.”

The busy surge, and the prospects of a prosperous season lasted all of two weeks.

When Pennsylvania Gov. Tom Wolf ordered all non-essential businesses to close on March 19 due to the coronavirus pandemic, golf courses throughout the state shut down and have remained that way ever since.

Many early-season tournaments have either been postponed or cancelled outright, and it’s uncertain when courses will be allowed to open, and if so, under what guidelines.

“I’ve been in the golf business for 35 years and we’ve never shut down the course,” Barletta said. “Not through hurricanes, tornadoes, whatever. A day maybe, but nothing to this magnitude. Nothing even resembling this.”

“I was 100 percent fine with it,” Shema said. “The golf industry is a little different. You could have 1-2 people playing out there safely, but I think it was the best thing to do at this time, to get this under control.”

“We closed that Thursday that the mandate came down, and for Friday had 120 people on my tee sheet. We did not allow anybody on the golf course,” Barletta said. “The

way I feel about this whole thing is we’ve got to let it take its course, because you’re killing people out there. It’s bad.”

Howie VanBuskirk, head professional at Mountain Laurel Golf Club near White Haven, said the course was scheduled to open on March 18, but opted to wait. The governor’s order came down the following day.

“You know personally I do agree with the governor,” VanBuskirk said. “I am lucky that our general manager Kathy Gower has been so great about it. I think she and I are on the same page. It makes no sense to open early just to close again. We wait it out until this passes and we go at the season as hard as we can.” 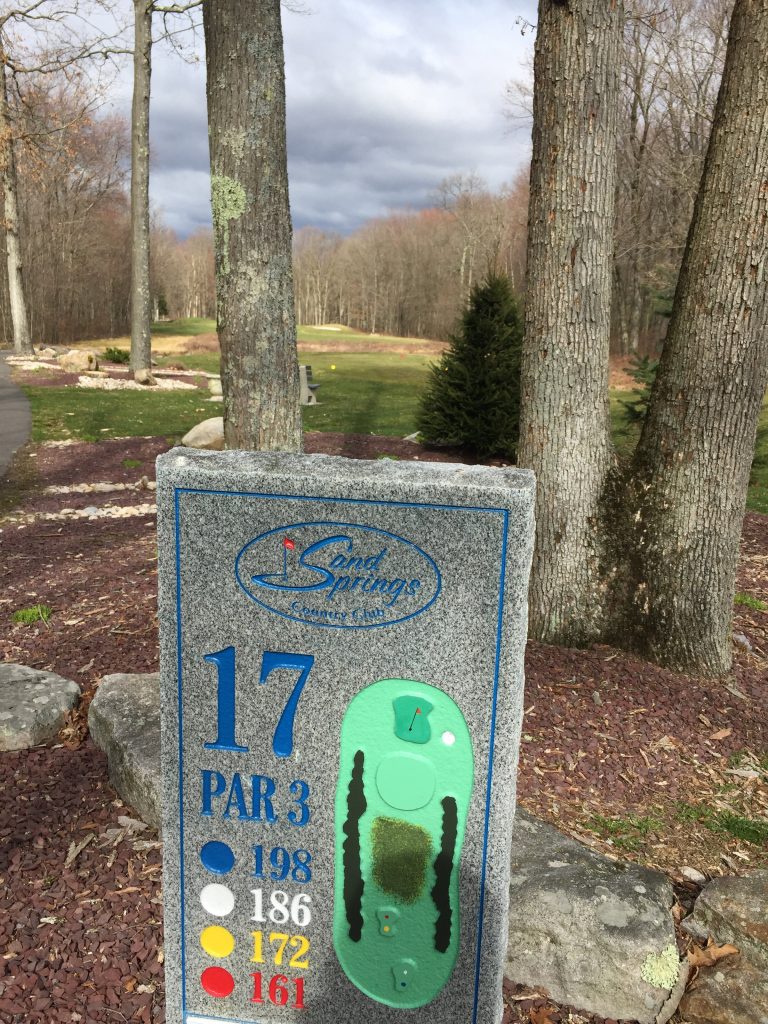 Like all non-essential businesses, things won’t be easy on local golf courses. They have no income coming in, and they are also losing revenue from tournament cancellations.

“We had 91 tournaments here at Sand Springs last year, and 49 at Edgewood,” Shema said. “Losing those dates in April, you can move them to later in the year, but then you lose regular play during that time. So it’s a no-win situation.

“We lost a good amount of play. We lost five tournaments so far, both in April and May,” he added. “They were mostly school-related tournaments. We’re already moving May tournaments to later in the year.”

“Some tournaments have been postponed, some cancelled,” Barletta said of Blue Ridge Trail. “Our Fun Night in late April, a captain-and-crew format, we usually have 144 players. That will not go on. Some of them that are coming up in May they are questioning me on, and I don’t have an answer. Let’s wait and see. We’ll have to play it day by day.”

“Financially, every golf course is going to suffer by starting at least two months later,” added VanBuskirk. “Whatever is postponed or cancelled I would love to capture the business later in the year.”

Blue Ridge Trail, Sand Springs and Edgewood, like most area courses, have applied for federal assistance under the president’s emergency stimulus plan. They hope that will at least help soften the financial blow by paying their employees.

“What you don’t hear them talking about is loss of revenue,” Barletta said. “It’s one thing to pay people back for their employees, maybe even some loans. Our cart lease, we have 105 carts because we’re a 27-hole facility. You’ve got to pay them. Who’s going to pay for that? We have to pay for that. Loss of revenue is going to be the main impact of all of this.”

Some in the industry say as many as one third of all of Pennsylvania’s golf courses may close permanently because of this shutdown, ones that didn’t have enough money in reserve and are already surviving month to month.

“I always compare the golf business to the airline and hotel business,” Barletta said. “You get one shot at April 30th. Whatever you don’t get booked or isn’t used, you’re done. Golf course business is even one step worse than that, because we have another factor in the weather. It’s hard.”

The one silver lining to all of this is that superintendents and their crews are able to maintain the courses during the shutdown. Some have also taken advantage of the time to do some seasonal maintenance and even some projects that they might not have gotten to until the fall.

“At least we could maintain the course,” Shema said. “That was considered essential, and that was a big thing.

“We were able to aerate the greens the past week, and we’re aerating the tees now, working on the sand traps and things like that,” added Shema. “We’re not doing any new projects right now, but we want the course to be in great shape for when we do start playing.”

“John’s been here for a long time. He knows what is going on out there on the course,” VanBuskirk said. “We have had a limited staff out there, but they are mowing, fertilizing, and overall maintenance. So, when we do get the word, we are looking great and ready to roll.”

VanBuskirk also noted that they’ve had some tree trimming and removal done at the course that golfers will notice immediately upon their return.

At 27-hole Blue Ridge, they’ve been putting the pedal to the metal as well.

“One of the staples of Blue Ridge has been our golf course is always in excellent shape,” Barletta said. “We just got ranked No. 2 in the state of Pennsylvania by Golf Advisor. We were ranked 34th in the nation. Greens are already aerated. They started tees this week, and everything else is being cut on a daily basis. We’re fully maintained.

“They’re also working on any type of irrigation repairs they’ve got to do, drainage projects that they want to do. They are going full tilt,” added Barletta. “We have our full staff working diligently on the golf course as if we were fully open, so when we do open the course will be in immaculate shape.” 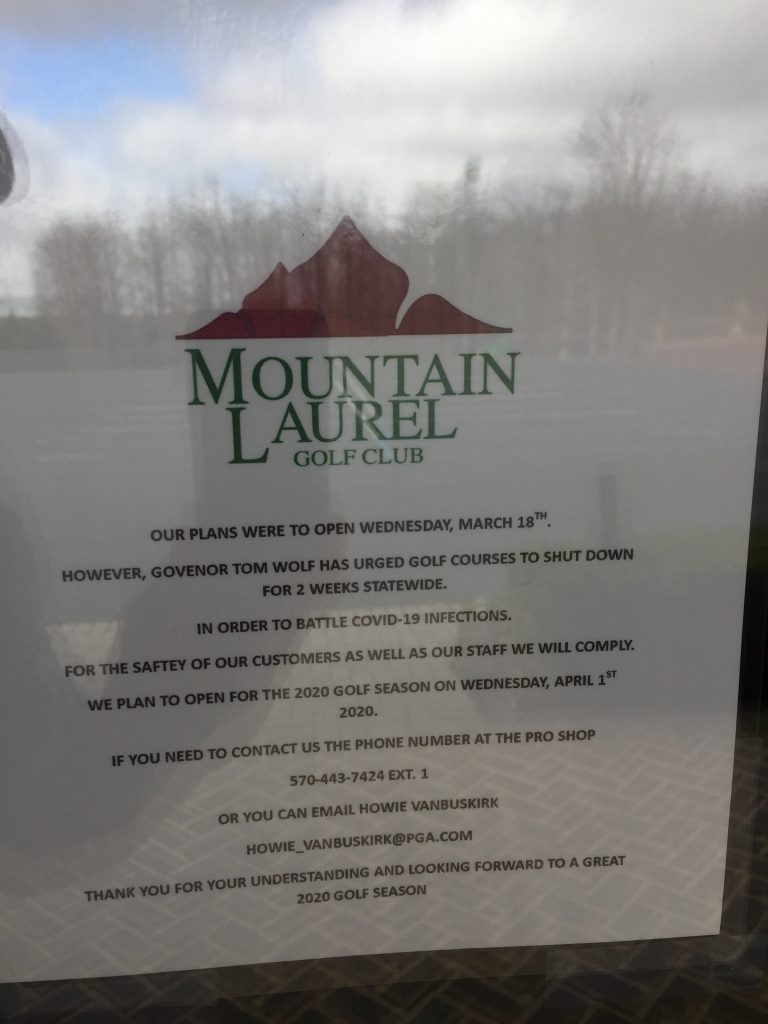 STEVE STALLONE / ACCESS NEPA
A sign on the door of the pro shop at Mountain Laurel Golf Club near White Haven tells golfers that the start of the 2020 golf season is being delayed due to the coronavirus pandeimc. At the time, opening day was moved from March 18 to April 1, but has since been postponed indefinitely.

When will golf return?

Golfers throughout the Commonwealth are eager to hit the links, gather with friends and unwind with a round of golf. Heck, they wouldn’t even mind hearing the word “fore” yelled from time to time.

“I would think that the May 1st date should be a good date,” Barletta offered. “I don’t think before that, although there’s a possibility if things cool down quite quickly. That’s really up to the professionals, not me. We’ll wait until the green light is given.”

“I’m hoping we can open by May or June, at least the golf part of it,” Shema said. “Even though we might not be able to have a tournament with the 50-or-more rule in place, we could at least get regular play. At least that would generate some revenue.

“We were putting one person in the carts at the beginning of March, just as a precaution as we were watching the developments and seeing what was taking place,” Shema said. “I imagine we would be doing that again once we started back up.”

“The course is going to be awesome once we open,” Barletta promised. “I know there’s going to be a ton of demand. I get at least 15-20 calls a day to see if we’re open. People are dying to play, but we’ve got to go by the law.”