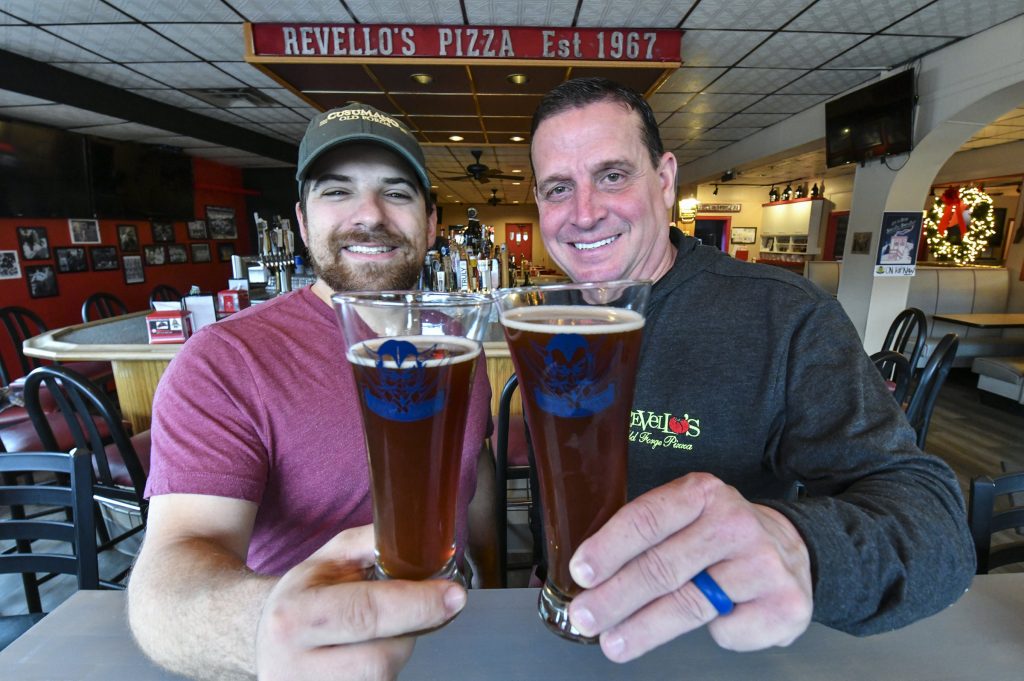 He told his neighbor restaurant and bar owner T.J. Cusumano about his idea and he was on board. They wanted to come up with a specialty line of beers that pays homage to their businesses’ hometown, which is known as the “Pizza Capital of the World.”

The problem was they couldn’t find a brewery that would produce the quantity they wanted to sell until Tim Brice got his license to begin brewing beer earlier this year at Bearded Barrel Brewing Co. in Plymouth.

Revello and Cusumano met with Brice and he partnered with the Old Forge business owners to create a specialty line of beers called Brew Devil.

The American ale is loaded with fresh cherries, honey and chocolate malt. Cinnamon and ginger were added. It’s sold on tap and was released for “Snow Forge,” a Christmastime event promoting holiday spirit in Old Forge.

Revello said the beer was named in honor of Joe Lettieri, co-owner of Salerno’s Cafe in Old Forge, who died in 2009.

“He was loved by so many people,” Revello said. “In this town, we are all very close and ‘Baby Joe’ stood out. You would always see him in everyone else’s restaurants.”

The beer was released after a few taste tests and Revello said he heard “nothing but great reviews.”

In addition to Revello’s Pizza and Cusumano Restaurant, the beer is sold on tap at Arcaro & Genell Restaurant, Cafe Rinaldi and Salerno’s Cafe.

Brice said he produced three barrels of the beer, which translates to about 93 gallons. Ninety pounds of cherries were used to create it, he said.

Throughout the year, Revello said there will be about six different beer offerings in the Brew Devil line available only in Old Forge. The beers will be promoted on social media prior to their release, he said.

They contacted people from Felitto, Italy about what ingredients they could use for beer for Old Forge’s popular Felittese Festival in September, Revello said.

Felitto is considered a “sister city” to Old Forge because many residents’ ancestors came from here and the beer would by symbolic of their heritage, he said.

Brice began brewing beer earlier this year at Bearded Barrel Brewing Co. at 439 W. Main St. in Plymouth and he now supplies beer for 14 places throughout Luzerne and Lackawanna counties.

He said the number will increase to 16 by the end of the year and he has more customers lined up for next year. He expects to start can and growler sales in late January next year.

It was his dream to open his own craft brewery. He started with a three barrel brewing system and he said he ordered additional equipment to grow. He expects to open a taproom in late spring or early summer next year.

Brice said he enjoyed meeting with Revello and Cusumano to create the new beer based on their input.

He said the partnership between Bearded Barrel Brewing Co. and the Old Forge business owners is a “great opportunity for both of us.”

“They wanted to do it for quite some time,” he said. “They were lucky that we are small enough to produce it and also flexible with the volume. We could have produced that size or five times that size. We could produce enough to accommodate them. It’s a good partnership.”