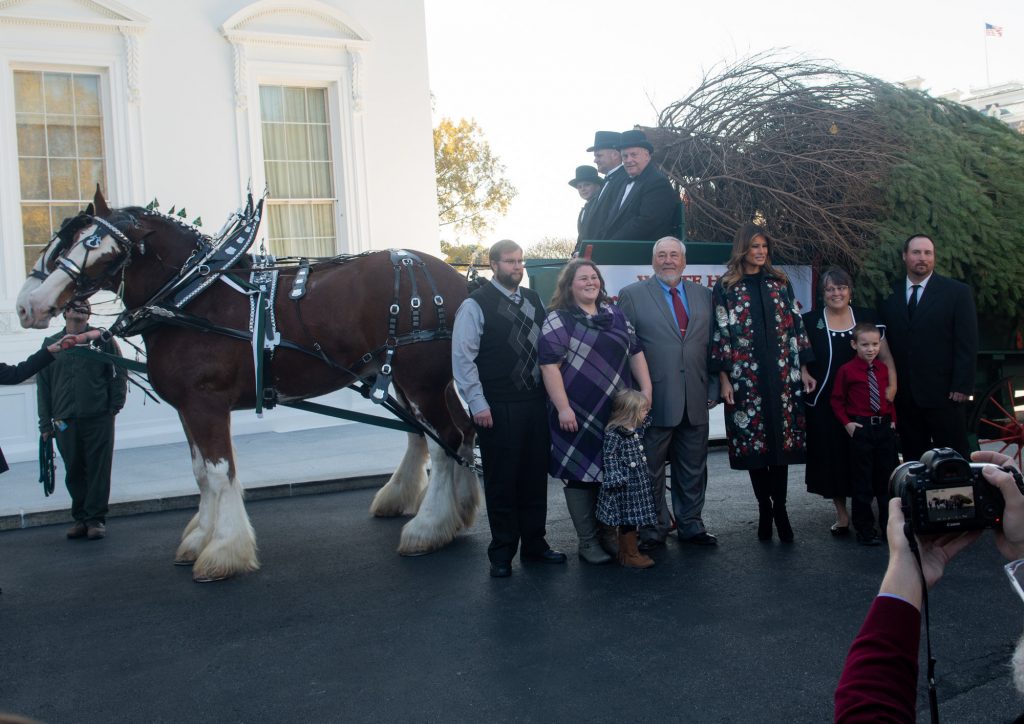 First Lady Melania Trump took a good look at the huge Douglas fir delivered to the White House on Monday, and personally thanked members of the Snyder family who were responsible for growing it.

Larry Snyder from Mahantongo Valley Farms in Pitman presented the National Christmas Tree to the first lady shortly after noon. The tree was brought to the north portico of the White House by horse-drawn carriage, with two Clydesdales regally leading the way.

The first lady joined his family for a special meeting in the Red Room, prior to the outdoor presentation, he said.

“She came in and met with all of us. I was quite impressed with her cordial attitude. She was very nice and even greeted the children,” Snyder said Monday evening after returning to Schuylkill County. 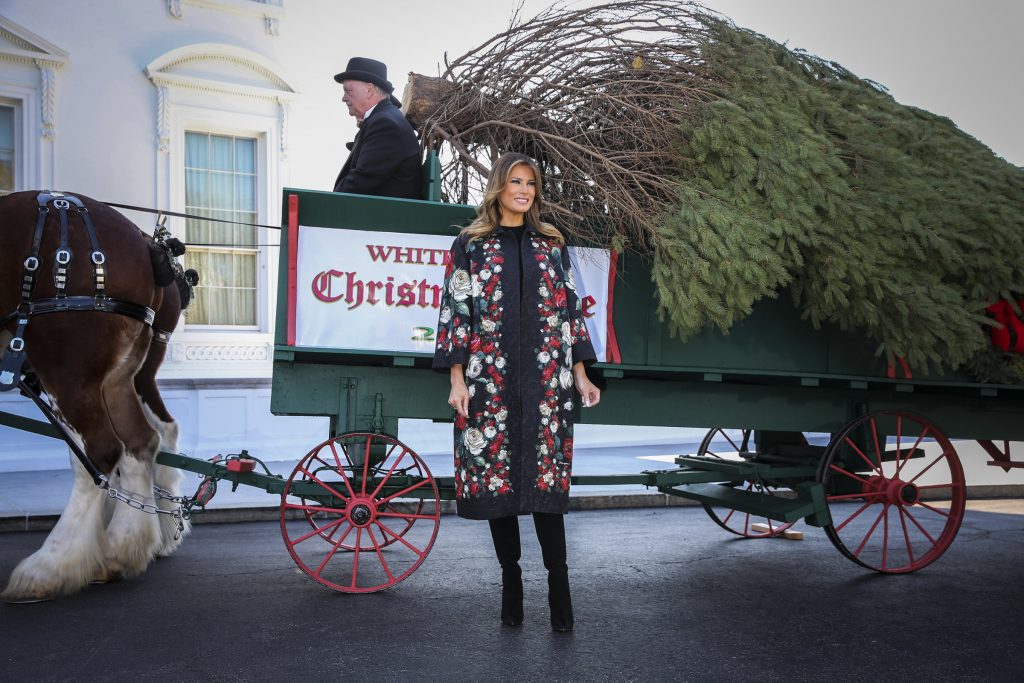 OLIVER CONTRERAS / SIPA USA VIA ASSOCIATED PRESS
First lady Melania Trump stands next to the White House Christmas Tree at the North Portico of the White House on Nov. 25.

To begin the tree presentation service, the United States Marine band played “O Christmas Tree” as the carriage slowly brought the tree forward. A white sign with red letters reading “White House Christmas Tree 2019” hung from the side of the carriage with the evergreen stretched lengthwise and protruding out the back.

The first lady came out of the White House at 12:09 p.m. alone and linked arms with a Marine escort who helped her down the stairs as military service members in uniform were waiting at the door. She wore a black outfit, a knee-length floral coat and high-heeled stiletto black boots.

She greeted those on the left of the carriage and walked around the rear of the wagon to inspect the tree. About 50 media people gathered nearby. Facing toward the media, she said, “Thank you, Merry Christmas.”

She walked to the front of the carriage, where she shook hands with the carriage driver and Larry Snyder and his family.

The first lady posed for photos in front of the carriage with Snyder and his wife, Joanne; their son, Aaron; daughter, Lydia Bomgardner; son-in-law, Andrew, and their two grandchildren, Mason Snyder and ClairaAnne Bomgardner.

Before departing back inside and before saying her final good-byes, the first lady reached her hand up, prompting Mason Snyder to deliver her a “high-five.”

“It was really nice that we could have the whole family come forward and make the presentation,” Snyder said. “It’s a family farm, and all of our family works on the trees. It was quite special.”

The tree, still sitting on the cart when the ceremony ended, will eventually be placed in the Blue Room and decorated.

At 10 a.m., Snyder’s family, Tim O’Connor, executive director of the National Christmas Tree Association, and representatives with the Pennsylvania Christmas Tree Growers Association were treated to a tour of the White House.

“That was my first experience at the White House,” Snyder said. He was impressed to see how the rooms are connected and the history behind each one, he said.

“The Blue Room was fairly bare. All of the furniture had been pushed back and the chandelier was taken down,” Snyder said of the spot where his farm’s Douglas fir will soon stand.

“They served us some coffee, water and cookies, and really entertained us,” he said. “We were in the basement briefly and saw the movie theater. We predominately stayed on the first floor and in the dining area. We didn’t see any of the living quarters and didn’t have the opportunity to see the president.”

Although the Snyders arrived Sunday evening, they were unable to do much other sightseeing before heading home. 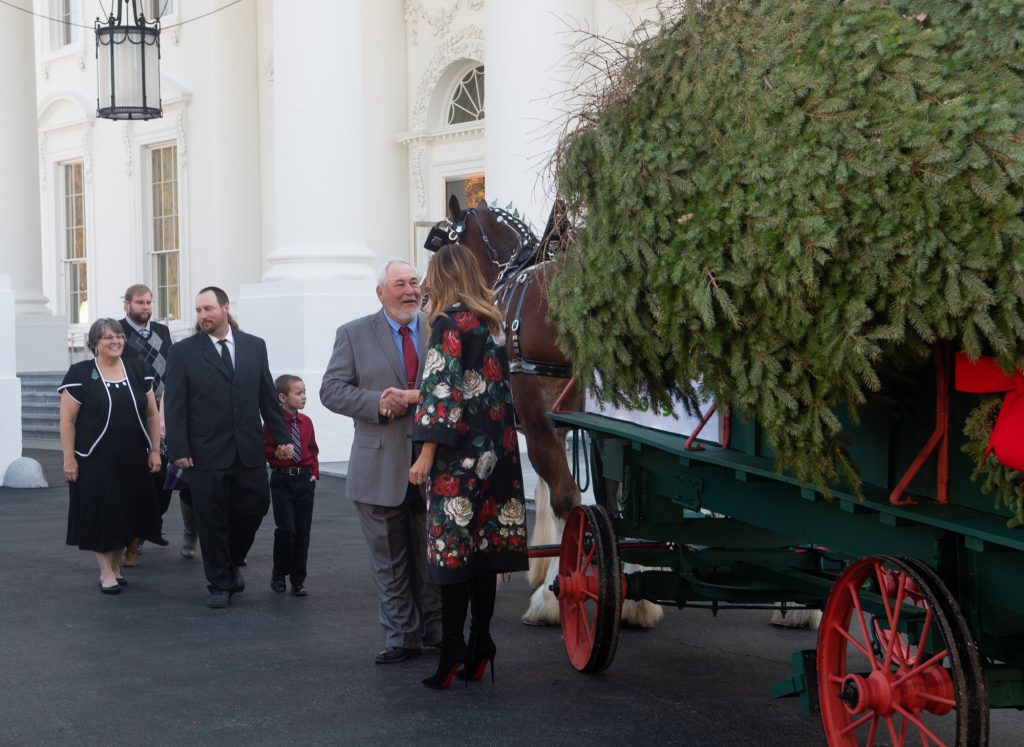 The history-making tree was harvested Wednesday in a brief ceremony attended by about 20 family and friends at the tree farm. Snyder won grand champion grower in the National Christmas Tree Association’s tree contest this summer, and with that award came the honor of presenting a Christmas tree to the White House. The association has been holding the contest to provide the tree for the White House since 1966.

The 16-year-old evergreen was grown on the Northumberland County side of the Snyders’ farm. It stood 23 feet high and was 12 feet wide at its base, although it’s expected to be cut some to meet the Blue Room’s display specifications.

Romberger Farm Supply donated a plastic silage cover so the tree could be wrapped and protected while en route. On Thursday, Aaron Snyder and Lyle Troutman transported the tree on a flatbed truck to the White House grounds for storage until Monday’s presentation.

“We’re going to go back to view the tree once it’s decorated,” Snyder said.

While millions of people visiting the White House this Christmas season will see Snyder’s tree, it is not the first time they vied for the honor. They were eligible and competed in the national contest in 2017, but did not place.

Meanwhile, another Schuylkill County couple had the honor to present the National Christmas Tree nearly two decades ago. Paul A. and Sharon Shealer, of Evergreen Acres Tree Farm in Auburn, won the national competition in 2000. In 2008, the Shealers had the reserve grand champion tree, and placed third nationally in 2017.