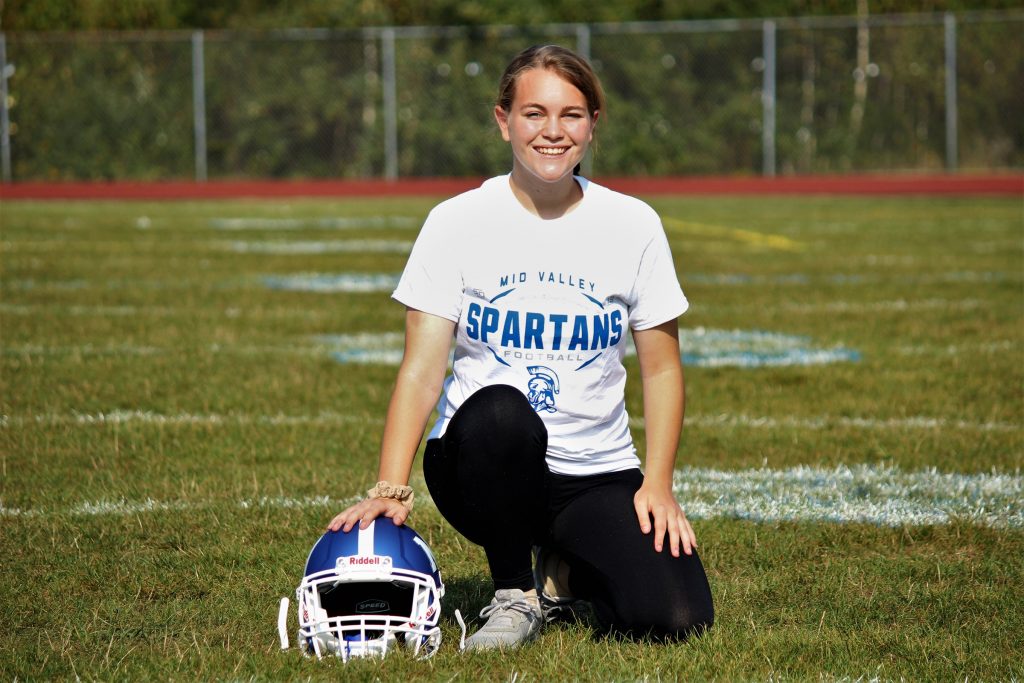 It was during a Mid Valley soccer practice when Ciara Strupcewski noticed football coach Dave Rebar heading in her direction. Rebar asked if the two could speak privately. The veteran football coach asked Strupcewski if she had any interest in playing football. For Strupcewski, the question was rhetorical. Of course she wanted to be on the team. With no hesitation, the junior midfielder agreed to be the Spartans’ new kicker.

“It wasn’t that hard of a decision,” said Strupcewski. “I quickly said yes. I think the idea of trying something new was very exciting for me.”

The Spartans football team accepted Stupcewski with open arms. Like their coach, the team recognized Strupcewski not for her gender, but for the talent she possessed.

“I really appreciate how supportive the team has been from day one,” said Strupcewski.

Strupcewski is an elite kicker off the field as well. She is a certified black belt in Tang Soo Do, a karate-based Korean martial art. The style incorporates fighting principles from subak, as well as northern Chinese martial arts.

Female athletes like Strupcewski are pushing the envelope for gender equality in sports with each passing day. Across the country, women are breaking limitations, exceeding unfair expectations and erasing the primitive stereotypes of yesteryear.

According to the National Federation of State High Schools Association, more than 2,400 female players participated in 11-man tackle football at the high school level in 2018. The number was the highest amount of female participants in the history of high school football.

We recently had the opportunity to sit down with Ciara and discuss her experience:

How would you describe yourself?

I would describe myself as a hardworking and dedicated person.

I wouldn’t have stuck with it if I didn’t have the support from my team.

Coach Rebar is an amazing coach. He is very supportive and helpful. He’s dedicated to the football program and everyone on the team.

How does your family feel about you playing football?

My family supports me through anything. I wouldn’t be where I am without their love and support.

Who is your favorite athlete?

My favorite athlete would have to be U.S. soccer player Carli Lloyd. She is an amazing soccer player who has great dedication, focus and skill.

Did you experience any backlash after joining the team?

I haven’t dealt with any backlash yet, but my journey has just begun. I hope that I continue to gain more and more support from everyone.

How do you prepare for a game?

I don’t have any pregame rituals, I just stay quiet and focused.

Can you see yourself playing football at the collegiate level?

Although kicking footballs is fun, I most likely won’t be playing at a collegiate level. Instead, I want to pursue soccer while I’m in college.