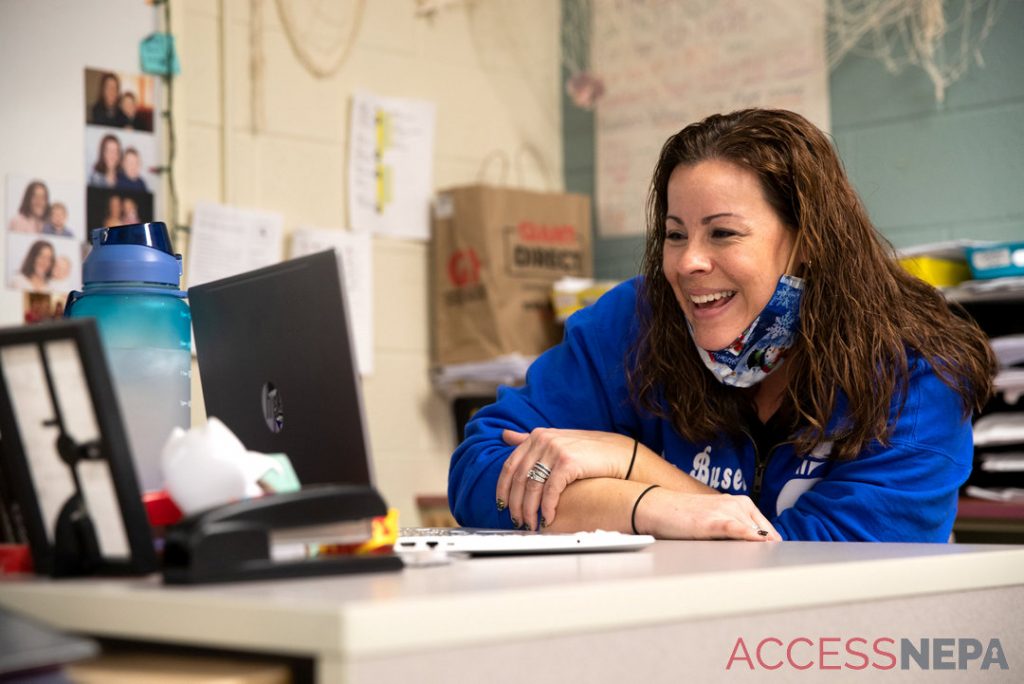 THROOP — Third grade classes at Mid Valley Elementary Center are spending time in Florida over the next two weeks to learn about sea turtles.

They didn’t have to pack luggage or boarding passes for their field trip down south. They’re not hopping on a plane or taking the long drive down the East Coast. The students from the six classes are learning from home in their bedrooms, kitchens and dining rooms and eventually, back in their classrooms.

The teachers at Mid Valley are just some of the educators around the region finding a silver lining to virtual lessons prompted by the pandemic — they can now take their students anywhere.

Valley View students, who are learning fully remote, have gone to Australia, Boston, Canada, Hawaii and Seattle, watched a rocket launch at NASA and made hot chocolate alongside the Hershey’s Chocolate Factory from their homes.

“It’s really neat and in a way, it enhances even what we’d normally do,” said Valley View Superintendent Michael Boccella, Ed.D. He said while they’re eager to get students back in their physical classrooms, the virtual world is broadening what school districts are capable of doing — not just field trips but also virtual parent/teacher conferences and professional development.

Mid Valley Elementary Center students in Shelley Buselli’s and Diane Wasp’s third-grade classes were the first on Thursday to take their grade’s virtual field trip to the Florida Oceanographic Society on Hutchinson Island in Stuart, Florida. The students’ reading module before the holiday break focused on the sea; the field trip was a way to cap off what the students learned about the world’s water, said Buselli.

Students in the Mid Valley School District are learning fully remote until Tuesday when they return to a hybrid program.

Yasmeen Fadlallah, the society’s education and exhibit specialist, taught the students about three different types of sea turtles. She moved her camera around to show a few of the turtles swimming in the waterways around the society’s preserve and used life-sized cutouts of three different types of sea turtles found in Florida to show the students the actual size of the reptiles.

Fadlallah’s screen froze at one point, which the tech-savvy students were quick to point out but patient for the lesson to resume.

She noted the weather, just 50 degrees, was cold by Florida standards. Back north in Throop, snow fell outside the empty classroom windows and the thermometer barely crept past 30 degrees.

The third-graders were engaged, turning on their mics to ask Fadlallah questions about the turtles. They wondered how a leatherback turtle could dive so deep and if any of the society’s turtles laid eggs. They fidgeted as if they were seated in their classroom. During this lesson, even family members joined. One student brought his little brother along for the trip.

Elsewhere in the county, Elizabeth Dessoye, who teaches first grade at Riverside Elementary West, created a lesson around the Scranton Civic Ballet Company’s performance of “The Nutcracker” this year. The students were not able to attend the performance in person but, through WVIA, they had access to a recording of the show.

Dessoye said families were thrilled about the performance.

“The parents liked that they were able to experience it with their kids at home, something normally they wouldn’t be able to attend,” she said. The students, who are now hybrid, were on a full remote schedule in the week before Christmas.

The first graders were exposed to a cultural event and were thrilled to find out that boys dance ballet and some older Riverside students were part of the performance, she said. Instead of taking just one class to the performance like in past years, all Riverside West students were able to experience the show, she noted.

Buselli said pre-pandemic, Buselli would have invited a speaker to come to class or taken a field trip to wrap up the Mid Valley students module . She sees virtual field trips as something that she will continue to offer in the future.

The students waved goodbye to Fadlallah as they signed off, their faces disappearing as they moved onto their next virtual class.

The Mid Valley third-graders will learn about space next, and Buselli and Wasp are already planning to take them out of this world.