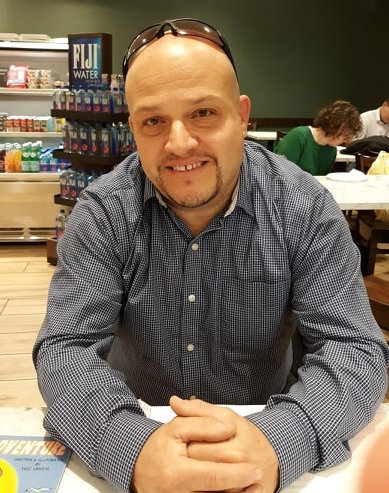 Eric VanTuyl of Shavertown self-published “My Beach Adventure” in September. It’s the first book he’s worked on as both an author and illustrator.

The book, which took four months to create, tells the story of a little girl who goes to the beach and tries to find something new to play with, only to discover she brought plenty of fun with her.

VanTuyl said the idea for the story came from his family, specifically his wife, cousin, and his daughter, who served as the inspiration behind the main character.

He said drawing is something he’s always been interested in.

“I’ve been drawing since I was young and in my high school, I had a cartooning class and from that point on, I just pursued it. I continued to draw but never really got anything out of it other than it was just relaxing just to sit there and draw pictures and stuff. Then I wanted to make it something bigger than that. I wanted to try and get my pictures out there whatever the case may be.”

That case came when he illustrated a book for his cousin, Dawn Krohberger, called “Jack Out of The Box” and realized he wanted to create one of his own.

Before he could reach that point, though, VanTuyl put that dream on hold based on advice he received from a high school teacher.

“I always wanted to be a cartoonist. I told my teacher and she said ‘You know, you may not want to pursue that dream because there are a lot of artists out there who are starving and aren’t making a lot of money.’ I understood because she wasn’t trying to say it in a mean way, she was just trying to let me know that it’s a hit or miss thing. So, for years, I left that alone, but suddenly I came across this book with my cousin and I was like ‘I want to do this’ and this is something that I’ve been pursuing ever since,” he said.

He said while he didn’t always know he wanted to create children’s books, he likes doing them because he thinks his ideas pair better with that genre.

“I didn’t want to write anything too major,” VanTuyl said. “I wanted to stick with a children’s book because I love doing cartoons and I know that sticks with kids. So, I was like, you know what, let me try this and see what happens.”

His favorite part of the creation process was seeing all the elements of the book come together, he said.

“I just love the idea of seeing it come alive because when I first started, I wasn’t sure exactly how it was going to come about, but as I started to draw, the pictures, everything started to come to life,” he said.
VanTuyl described the moment he first held the book as “a great feeling,’’ especially because he published it on his own. He said he didn’t want to work with a traditional publishing company because of how difficult the process can be.

“It’s hard to get into a traditional publishing company because you have to be like a Dr. Seuss or somebody like that, you have to come in with an agent and some agents won’t even look at your work unless there’s like a wow factor. I didn’t want to pursue that, because I felt like I was wasting my time in a sense,” he said.

The story’s target audience is children between the ages of 3 and 6 and VanTuyl said he hopes the lesson of the value of family resonates with them.

He has more books coming up, including one called “A Tough Nut to Crack” and one about a Christmas tree that will be released next year.

He will continue to promote “My Beach Adventure,” though. He has already done a reading with children at an elementary school and hopes to get uploaded to the Barnes and Noble site very soon.

The book is available for purchase on Amazon as a paperback, on Kindle and Kindle Unlimited.